PREACHING THE EF MASS IN AN AMBO THAT GIVES ME A NOSEBLEED! 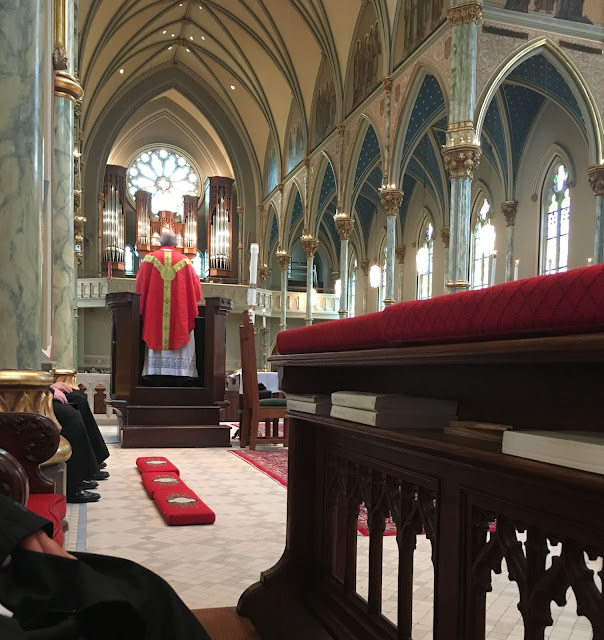 Is that ambo on the Old Testament side?

On the Epistle side, bishop's throne on Gospel side. The new altar on a straight line with the two.

‘Epistle’. Duh. Was apparently past bedtime.

Those of us who have no such access to the Truth and Beauty of Holy Mass of the ages salute you in your lofty perch, Father.

Yesterday we assisted at a very uninspiring OF Mass whose only loft was a sung “On Eagle’s Wings”. So sad.

the young woman in the middle looks like a woman of color!

TJM, you were fooled by the lace.

Pope Benedict XVI made it clear that Summorum Pontificum was a mere act of "tolerance" offered to the "small group" of Faithful who preferred to worship via the TLM.

He made it clear that the Novus Ordo was here to stay...and would serve as the Latin Church's primary Mass.

He offered the following during his press conference en route to France:

Q: "What do you say to those who, in France, fear that the "Motu proprio' Summorum Pontificum signals a step backwards from the great insights of the Second Vatican Council? How can you reassure them?"

As Pope Benedict XVI made clear via his words and actions (he refused to offer the TLM publicly), the Novus Ordo is, and will remain, the Latin Church's primary Mass.

But thanks to such TLM "pioneer priests" as Father McDonald, someday, at one Latin Church parish after another, although those who assist at the TLM may be small in amount, the TLM will be accepted as a regular part of parish life.

The TLM must move beyond the FSSP, SSPX, etc., or said Mass will remain a "sideline" Mass within the Church.

That is, here and there, one may find a TLM-only parish. But only a relative handful of Catholics within a diocese will have any sense of the TLM's existence...will enjoy easy access to the TLM.

That is why its imperative — if the TLM is to enjoy greater visibility throughout the world — that parish priests embrace/promote the TLM.

The TLM must move beyond the notion that said Mass is the property of, for example, the FSSP, or SSPX (as well as additional TLM-only communities).

That is, bishops and priests must fill their hearts and minds with "love and tolerance" for those Faithful who desire to worship God via the TLM.

As Pope Benedict XVI declared, "to let them (the Faithful who desire the TLM) live with this liturgy seems to me a normal requirement of the faith and pastoral concern of any Bishop of our Church."

But that is just the beginning in regard to the process to return the TLM to the normal life of a given (Latin Church) parish.

2. I realize that the following is wishful thinking, but TLM "traditionalists" must move beyond their hatred of the Novus Ordo, "Novus Ordo Church,"...

...the separatism that they've embraced in regard to the TLM.

In that regard, I think of a leading "traditionalist" outfit (Rorate Caeli) who declared that they have z-e-r-o interest in the Novus Ordo, "Novus Ordo Church," "Novus Ordo Popes," "Novus Ordo Cardinals, bishops, and priests..."

It would be of great help to the advancement of the TLM should such out-of-control "traditionalists" cease their nonsense.

However, that is, again, wishful thinking.

But the good news is that such holy "Novus Ordo priests" as Father McDonald, who has embraced and promoted the TLM, are pioneers in the process that will restore the TLM to the regular life of the Church...the diocese...the parish.

Father McDonald and his like-minded brother priests will form new waves of rational Catholics who are attached to the TLM.

They will reject the current widespread radical anti-"Novus Ordo Church" mentality that has marred the Traditional Catholic Movement.

The new wave(s) of Faithful attached to the TLM will enjoy healthy, rational, regular parish life.

They will be formed in holy fashion by Father McDonald and like-minded priests.

It is mind-boggling that many bishops and priests refuse to permit the TLM to be offered at the "Novus Ordo" parish level.

Said bishops and priests help to drive those among the Faithful, who desire to worship via the TLM, into the irrational "traditionalist" communities.

We need to pray that thousands upon thousands of Latin Church priests follow Father McDonald's lead in regard to embracing and promoting, in rational, healthy fashion, the TLM.

B XVI was being diplomatic. The classic Roman Rite was not simply to be 'tolerated', it had never been abrogated, nor could it have been, as SP and UE make clear. Stop using selective quotations and look at the larger picture.

Mr. Nolan. Very well. I will "stop using selective quotations and look at the larger picture."

Therefore, following your lead, I will reject that which Pope Benedict XVI had, in very clear fashion, declared.

I will not take Pope Benedict XVI at his word.

In concert with the spin that you have placed upon his very clear declaration in question, I will pretend that Pope Benedict XVI did not say (or mean) the following:

"...this 'Motu Proprio' is merely an act of tolerance, with a pastoral aim, for those people who were brought up with this liturgy, who love it, are familiar with it and want to live with this liturgy.

When you've finished being sarcastic, perhaps you might read up on what Benedict had to say on the classic Roman Rite in his preface to Klaus Gamber's book, in official pronouncements (not least SP and its accompanying letter, and UE) and in his liturgical writings, and compare and contrast these with comments he made in a press conference which were designed to appease his critics in the French hierarchy.

It's not difficult to work out what he really thought.

You have insisted that Pope Benedict XVI issued a declaration "designed to appease his critics in the French hierarchy."

That which "he really thought" (your words) about Summorum Pontificum/TLM differed greatly from his declaration en route to France.

If you are to be believed, then Pope Benedict XVI...let's use the proper word...

..."to appease his critics in the French hierarchy."

Hmmm...his "critics in the French hierarchy" must have been ignorant as at least one among them must have been familiar with his "official pronouncements (not least SP and its accompanying letter, and UE) and in his liturgical writings..."

Otherwise, if you are to be believed, nobody in France had realized that Pope Benedict XVI had spoken out of both sides of his mouth in regard to his declaration in question.

Pope Benedict XVI had taken a tremendous chance of having been exposed as a liar...if you are to be believed.

You are very selective in your papalotry. Have you ever stated that PF "speaks out of both sides of his mouth?" Think about it and then go to confession.

Trying to reason with you is like arguing with a toddler. The French hierarchy had indeed read SP and the accompanying letter (which itself was intended to be placatory) and many of them did not like what they read. The same applied to some in the Italian hierarchy who publicly voiced their dismay. Elsewhere the bishops gave SP a cautious welcome. If they had reservations they kept them to themselves.

Answering a question at a press conference is not 'issuing a declaration'. It must also be looked at in relation to the question being asked. Of course Benedict would not say SP was a 'step back' from Vatican II; for a start he didn't believe that it was.

Cardinal Ratzinger was on the cardinalatial commission which ruled that the old Mass had never been abogated. He offered it when Archbishop of Munich. He reiterated something that had been almost (but not quite) forgotten - that the Church does not and cannot suppress valid and orthodox rites. 'What was great and sacred for our ancestors remains great and sacred for us, too.'

He acknowledged that those who showed a predilection for the time-honoured forms were not necessarily those who had been nurtured by them.

He talked of 'mutual enrichment'. My bishop at the time quipped that there wasn't much the new rite could teach the old!

Every parish at which I regularly attend the old rite is not a 'TLM parish'. Mass is offered in both forms as a regular part of parish life. More and more priests are now 'bi-ritual' (this includes Oratorians and Ordinariate priests).

Benedict knew what he was doing and SP is an important statement of principle. It is not a temporary concession which could in theory be withdrawn. That's the genius of it.

Have you gone to confession yet to confess your calumny against Pope Benedict?

Notice how MT runs away when he is confronted with reality and reason?