MARC WHO COMMENTS HERE SENDS ME A PHOTO OF A SIGN IN THE VESTIBULE OF HIS SSPX PARISH—WHAT DO YOU THINK ABOUT THIS CHURCH DRESSCODE? 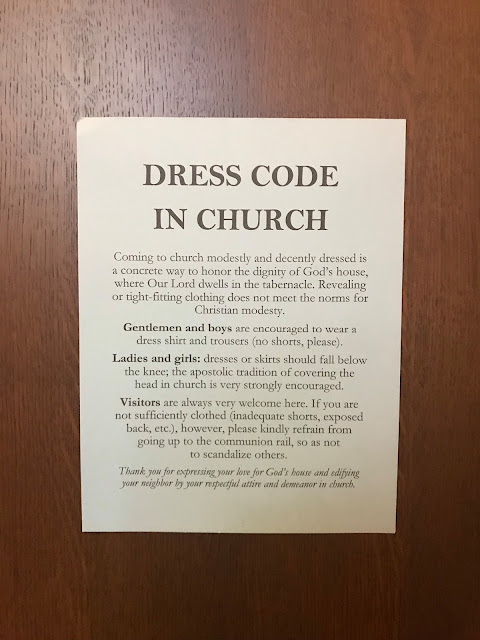 Actually that picture is from the local Institute of Christ the King oratory.

I’m fairly certain there’s a similar notice in the SSPX chapel. Except at the SSPX, the part about women’s head coverings makes it more mandatory (and there are covers available for borrowing).

This is not an unreasonable dress code. I see no reason why it shouldn't be the norm.

I think this notice does a few things well:

Second, it sets a very reasonable standard that it is hard to argue against.

Third, it welcomes and does not ostracize whilst causing people to self-reflect before presenting for communion.

The Institute's oratory in Detroit (which I was blessed to go to last week during my travels) posted today on Twitter a similarly balanced reminder:

The following are often gravely neglected in these conversations:
-Men need to dress modestly too
-Modesty is a virtue
-Modesty in Attire is only one aspect of the virtue: there’s also Modesty in Speech & Modesty in Comportment

I do not know how exposed knees, shins, and/or calves dishonor the dignity of God's house.

Calling veils for women an "apostolic" tradition seems to me to give far more "authority" to the practice than it might have.

Requiring "insufficiently clothed" visitors to refrain from taking communion is, in my opinion, an overreach by the local pastor.

I believe modesty should first be exemplified in the extraordinary ministers helping distribute the Holy Body and Blood of Jesus. Also, the lectors should be dressed modestly as well. Men usually wear a suit or dress shirt, but it is disturbing when women lectors dress as if they are headIng to the beach. The lay people need more teaching on the holiness of receiving Jesus in the blessed sacrament which would hopefully cause them to dress more appropriately.

While there is an appropriate equality here in terms of expected dress (men vs. women), I keep getting back to the same place - the best a person might have is jeans and a t-shirt. If the jeans are neat/clean and the t-shirt isn't obscene or, ill-fitting, why make someone who is sincerely seeking the liturgy of the Church and her sacraments feel uncomfortable? Also, I share Fr. K's opinion regarding pastoral overreach, "insufficiently clothed" and receiving communion. An example that came to mind that might profit from Fr's input: If, heaven forbid, the "insufficiently clothed" person succumbs to a fatal injury on their way home from mass, wouldn't it have been better for them to benefit from the graces of a final communion?

I think this notice is a good example of what another priest commenter here was mentioning the other day about priests knowing their flock. This is a notice at a traditional-mass only oratory. The pastor has the grace of state to guide his flock. He knows what they need to hear and what their particular “issues” are.

In other words, I don’t think there is a one-size fits all dress code that would work in all circumstances. Even among the various traditional churches I’ve been to, the flocks obviously would’ve needed to hear different things. This notice, for example, wouldn’t be needed at the local SSPX parish since there’s an ingrained level of modesty given the generational aspect of the SSPX attendees. But other things might need to be mentioned or re-emphasized.

I happen to think it is a good reminder that people who’ve dressed immodestly (or, more likely, happen to be visiting) see a notice to refrain from communion. That is how people learn. Even if they perish on the way home, receiving communion is such a state wouldn’t have been beneficial anyway. Better that they properly form their conscience and, perhaps, have some contrition for being immodest.

Shorts on men or women, pants on women, bare shoulders, exposed knees, or women without hats or veils do not constitute immodesty in any parish. A person wearing any of these styles should not be turned away from communion because someone might be "scandalized" by seeing their calves.

A person who is attired in any of these ways is in no need of adjusting his or her conscience or of feeling contrition, inasmuch as that person has done nothing wrong.

Where in I agree in part with Fr MJK, and with the sign as well.

exposed knees, shoulders, or not veiling, in of themselves are immodest. Modesty isn't just an exterior thing, it's an interior attitude as well. However, sometimes, it's not what one does, it's how one does it that gets one in trouble.

The sign is appropriate for a church though. We in the East at least in Russian tradition mostly, support the veil usage.

Thank you Marc, I deeply appreciate that. I am 39 today and will be forever! God's blessings upon you and your family!

I like it- Its the exact same dress code we have at my traditional parish (non SSPX in union with Rome). Ours is posted and in the bulletin and preached occasionally from the pulpit.

I don’t think this sign was posted in Georgia. It’s June & we’ve already attended Mass on a couple of 100-degree days.

The sign is in Missouri. But, for what it’s worth, it gets it here too. At one of the traditional churches we go to, there’s no air conditioning. Men still wear suits and women still wear long dresses. Being hot is not an open invitation to wear less clothes.