IS MODESTY A FOUR LETTER WORD

English Translation of Italian signs in front of churches in Italy: the body also has its own language. dress with dignity and respect the sacred place. (Not allowed) a sleeveless dress, in a miniskirt, in shorts. 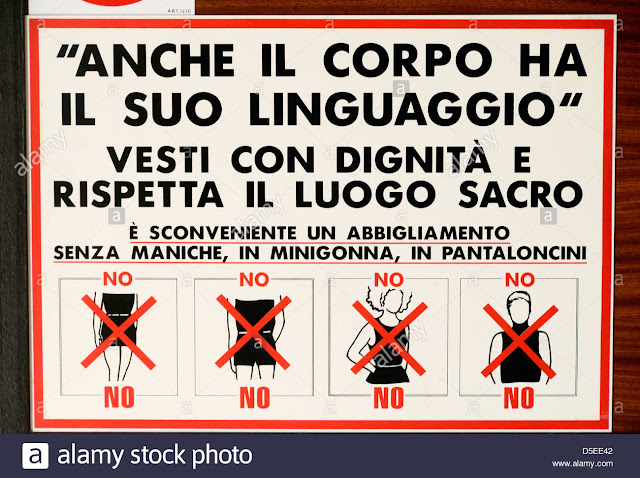 I see where Twitter is getting bishops and priests in hot water with our pagan society which unfortunately now includes so many Catholics.

One priest is being criticized for asking women to dress modestly for Mass. In a tweet he said that immodest dress on women can be an occasion of sin for some men.

Is dressing provocatively for Mass, be it a man or a woman, an occasion of sin for either?

Does being modest equal being a prude?

Those who disagree with this priest's request more than likely would disagree with what most churches in Rome require of tourists. Shoulders are to be covered and appropriate dress is to be worn when visiting churches let alone attending Mass.

Islam has strict dress codes in public for women as well as men, let alone in mosques. Looks like Muslims are more Christian than many Catholics would like to be.

I have not tackled this in my parish because it's a challenge to convey the message just right. As someone wiser than I pointed out, there is a real distinction between what you say and what people hear. With certain issues, I have several distinct audiences, and I want to say one thing to the first group, but I don't want the other groups to hear it, because they need to hear something different. So, for example, some people need to hear, about confession, or Mass attendance, or other things, "get more serious!" Others, sitting the very same pew, absolutely do NOT need to hear that; they are the ones who think it's a sin if they stayed home from Sunday Mass because they were only somewhat ill with the flu, or the roads weren't entirely impassible.

So it is here. Some people need a wake-up call about either modest attire, or about slovenly attire. Meanwhile, there are some who are doing the best they can, either because of economic situation, or other situations mean they have a struggle just getting to Mass. Some people feel out of place at church precisely because they don't have "nice" clothes. There is an insider/outsider aspect here, don't kid yourself.

So maybe I should preach, "come as you are"? Again, some people should absolutely hear that; others, absolutely should not. I don't begrudge anyone for either being poor or being harried and having to rush from work to Mass. But tell me you haven't seen people show up, even for a wedding or a funeral, and quite obviously not made any effort in their attire. It's not poverty or haste; it's an attitude thing. I may not be able to stop it, and I may prudently choose not to rebuke it, but why would I encourage it?

Finally, it seems to me that women are more often immodest in attire than men. But only comparatively; and there is more here than meets the eye (pardon the pun). Many women want to be modest, but modest fashions are hard to find. There are significant social forces pushing women in that direction, including other women. Men, on the other hand, have no difficulty finding modest attire, and in my experience, generally prefer it. But the bottom line is that if a priest (or anyone) makes a point of emphasizing modesty, it's probably going to be more about women than men. Oh, you can always throw in a mention about men in shorts, but however unappealing that can be, no one will take you seriously if you say it's an occasion of sin. So you end up "picking on women." Fair or not, that's where the reaction will trend.

Finally, the standard behavior of ushers and sacristans in Roman churches would be deemed scandalously rude in nearly any church in the U.S. They think nothing of barking "Silenzio!" at you.

Friend on mine went to visit family in Italy for 18th birthday. Cousins went to beach that was topless. She was mortified. They went to Mass the next day and she wore a very pretty but unfortunately sleeveless sundress. So grandma beat her. I don’t know if she has been back.

The priest should have simply asked that during the warmer months, people dress for the Lord keeping modesty in mind (e.g. don't single anyone out). If his church offers air conditioning, he could have also commented that concerns regarding being overly warm have been addressed. The balance and, therefore, the sensitivity enters the discussion when, for some, jeans and a t-shirt etc. might be the best that they have to wear. So, conforming to a standard like, sport coat/dress trousers/dress shoes, for example, might be unrealistic for many as well as exclusionary. In lesser advantaged areas, those attending could well come in from the fields and what they are wearing is the best that they have. Fundamentally, I don't see this as problematic so long as the attire isn't overly revealing or, contains obscenity like some t-shirts.

I was shown round several churches in Rome by an Italian woman who was not a regular Mass-goer. Yet despite the 35 degree heat she carried a shawl with which she covered her shoulders when entering a church.

I would not attend Mass wearing short trousers. But then, I am old-fashioned enough not to wear them in London. Yet at Brompton Oratory I have seen American tourists (of both sexes) dressed as if for the beach.

Time was when a nubile female in 'hot pants' proceeding to the altar rail inches from my eye level would have precluded me from receiving Communion. Nowadays I might raise an eyebrow but nothing else (sigh).

It has been brought to my attention that PF has officially changed the words of the Gloria and the Our Father today.

Really? Can you provide us with the revised Latin texts?

PF can do or say what he likes. Real Catholics have no confidence in him and simply soldier on regardless.


Pope Francis has approved a revision third edition of the Italian Missal, including changes to the Lord’s Prayer and Gloria.

Pope Francis did not "change the words of the Gloria and the Our Father."

"On May 22nd during the General Assembly of the Episcopal Conference of Italy, President Cardinal Gualtiero Bassetti announced the approval of a third edition of the Messale Romano. The revised translation will include changes to the Lord’s Prayer and Gloria.

The first English version (1964) of the Gloria had 'Glory be to God on high, and on earth peace to men who are God's friends.' Since then there have been two different versions. The 'Our Father', 'Hail Mary', and Fortescue's 'Hail Holy Queen' (1913) will not be changed - they are too familiar.

These are merely translations in any case, used by permission. And I wish people would stop confusing editions of the Roman Missal with revised translations. There have been three editions (editiones typicae) of Paul VI's Missal, the last one being in 2002.