SWEET JESUS, HAVE MERCY ON THEM!

IF YOU DIDN'T THINK WE NEEDED POPE BENEDICT'S HERMENEUTIC OF CONTINUITY AND REFORM OF THE REFORM AND IF YOU DIDN'T THINK THE THEOLOGY OF RUPTURE IN OUR TRADITION DOESN'T EXIST AND THAT THERE ISN'T LITURGICAL ABUSE TODAY OR IN THE RECENT PAST, THINK AGAIN!

If you thought the "photo-shopped" image of Pope Benedict was an insult to the reverence due our Lord in the Most Holy Sacrifice of the Mass; if you thought some of the other photos I have posted, clown Masses, no vestment Masses, children Masses which trivialize the Cross of Christ and His great sacrifice, you will absolutely cringe as you watch this video. The vision of Vatican II, the spirit of Vatican II and the most liberal of reforms officially promulgated never, never, envisioned such an abomination of the celebration of the Mass as this video. But yet, these kinds of things happen over and over again. Those who promote these things are liberal in all ways except when it comes to the celebration of the Extraordinary Form Latin Mass, kneeling for Holy Communion and the new English translation of the Mass to be implemented by Advent of 2011. Go figure! It is sad indeed.

God have mercy on them for this rupture of Liturgy, faith and spirituality. Please note the age of the people--aging hippies from the 1960's who don't know it is the 21st Century! They don't know their agenda has caused nearly 80% of Catholics to stop attending Mass--would you attend Mass that was celebrated this way? You would think it was a joke! And it is! These aging "spirit of Vatican IIers, remind me of Japanese soldiers isolated on deserted islands for years after World War II who thought the war was still in progress and didn't know they had lost! What deserted island have these people in the video been living on, or what kind of a time warp?


THIS IS THE WEST COAST "CALL TO ACTION." THE LITURGICAL SPACE MUST HAVE BEEN IN THE ALZHEIMER UNIT OF A NURSING HOME, BUT I WOULDN'T WANT TO INSULT ALZHEIMER PATIENTS WITH ANY OF THIS. THESE PEOPLE ARE CULPABLE FOR THEIR ACTIONS!


What is it with puppets and the west coast?--although these pictures and the Seattle cathedral are quite stunning. I'm sure the giant puppet has a purpose in the OF Liturgy just celebrated, although I can't find any reference to them in the GIRM, the rubrics or in tradition. Kind of reminds me of the Thanksgiving Day parade in New York. But where is Snoopy and Underdog? But when it comes to peculiar accretions to the liturgy, I think the puppets in the OF Mass top the altar server holding the hem of the priest's chasuble in the EF Mass! At least the holding of the hem of the chasuble is dignified and rubrical and not made up as you go kind of rubric! 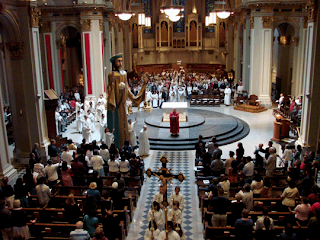 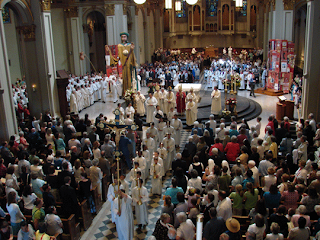 Now, I know that some people might think this image of the priest having his chasuble lifted is odd. But it is a rubric in the EF Mass. Is it more odd than the puppet above in the OF Mass? What rubric calls for this accretion, or do they propose that a rubric for puppets be added? I guess we should be flexible enough to allow the actual rubric in the EF Mass for the sight below and allow for the spectacle above even if it has no precedent in Liturgy nor rubrical backing. Flexibility is the name of the game I guess. 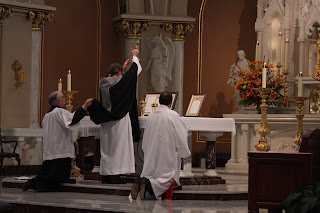 WHAT IN THE NAME OF JESUS WAS THAT! I have seen some small actions that where not exactly kosher, but this just ridiculous. How can the local Bishop even consider letting that happen. Their is just no excuse for that. At first I just laughed myself breathless, until I realized these people where serious. while funny, it is very sad

So where is it?

This video illustrates the biological solution. Notice over 75% of laity looked over 50. That's why I believe the Church will be back to it's former glory within 10 years. VIVA BENEDICTUS!

I would walk out !!! And wait to make the scene after the Mass. I often wonder what fellow Priests think when they see this and then meet the Priest face to face. What are the reactions? Does anyone say anything? Does he catch flack? ANd where and what seminary did he attend. This is really a scandal to people and Rome should act. Enough is enough.

WCCTA stands for West Coast Call To Action. Looks like many or most of these CTA folks are not far from their well-deserved eternal reward. Perhaps we may pray that their salvation does not depend solely on participation in liturgy such as this.

Henry, thanks for the clarification, I was wondering was the letters meant. The comment above is correct, "must be the west coast!" What is it about the west coast? And isn't the petition against the new English translation of the Mass based in the west? Seattle to be specific and the Cathedral there? What is it with the west coast? It is really baffling.
Fr. McDonald

Th Left Coast is where all the Left Wing loons live, that's why.

Sorry to see this kind of foolishness in a Catholic Church. It reminds me of an ordination service I attended in the Episcopal Church where - I kid you not - there were clowns, acrobats, and live animals (including a falcon that was let loose to fly around the sanctuary).

How could you tell the clowns from the Anglican priests?

I hate to burst your anti-California bubbles, but this stuff does not always originate on the "left coast" nor is it exclusive to that region. Much of it is born in the "intellectual centers" that miseducate many of our liturgical "experts", especially in the northeast and midwest.

Disregard for the magisterium and veneration of rupture is everywhere, although not always as blatant in some quarters. Just look in the back of your church and see how many copies of U.S. Catholic are on the racks in the vestibule.

Mr. Kumpel is, of course, correct. It is just that California is so,so...well, so California! Never worry, however. It will be a chain of islands one day and we will all be enjoying views of the Pacific from our balconies in Phoenix.

The "choir" (a.k.a - Singing Mob) is abominable. Actually fits in with the rest though. I've never heard NETTLETON done at that tempo...sounds like an Enya song...

It would be interesting to see a similar "enhanced liturgy" at a Muslim place of worship. I suspect the reaction would be swift, decisive, and fatal.