UNION WITH THE ROMAN CATHOLIC CHURCH IS THE GOAL OF ECUMENISM! DOES THIS SOUND ECUMENICAL?

From Catholic World News: Cardinal Levada: ‘Union with the Catholic Church is the goal of ecumenism’ March 09, 2010 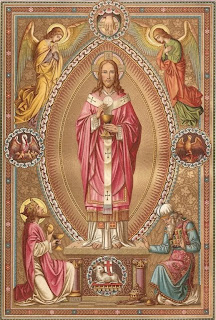 In a lengthy address delivered in Canada on March 6, Cardinal William Levada, prefect for the Congregation for the Doctrine of the Faith, stated that the reception of communities of Anglicans into the Catholic Church is consistent with Anglican-Catholic ecumenical dialogue because “union with the Catholic Church is the goal of ecumenism.”

Tracing the history of Anglican-Catholic dialogue since the Second Vatican Council, Cardinal Levada noted that Anglican decisions to ordain women and countenance homosexual activity were not consistent with earlier statements agreed to by Anglican and Catholic theologians. “No wonder, then, that the ordination of a bishop in a homosexual partnership in New Hampshire, with subsequent approval by the General Convention of the Episcopal Church of the United States in 2003, and the authorization of rituals for the blessing of gay unions and marriages by the Anglican Church in Canada, have caused an enormous upheaval within the Anglican communion,” the cardinal observed.

“Turning to the Anglican Communion, we can see the many elements that impel toward full unity: regard for the unifying role of the episcopate, an esteem for the sacramental life, a similar sense of catholicity as a mark of the Church, and a vibrant missionary impulse, to name but a few,” he continued. “These are by no means absent from the Catholic Church, but the particular manner in which they are found in Anglicanism adds to the Catholic understanding of a common gift. These considerations help us appreciate the Catholic Church’s insistence that there is no opposition between ecumenical action and the preparation of people for full reception into Catholic communion.”

“ Moreover, among the distinctive elements of Anglican heritage should be included the spiritual and intellectual gifts of the Oxford movement in the 19th century, the then-Anglican cleric Newman together with his fellow Tractarians have left a legacy that still enriches a common Catholic patrimony,” he added.

My thoughts:
It seems to me that the euphoria that existed in the late 1960's and through the 80's about ecumenism has come down to earth. While much has been gained in terms of Catholic, Orthodox and Protestants having mutual respect and love for each other, most Protestant denominations are drifting further and further away from "catholicity" and "orthodoxy" the latter with a little "o" and capital "o"!

It seems that the only way to complete Christian unity is the way that many Anglican parishes and communions are or may take. It is based upon what Cardinal Levada speaks above. They are being incorporated into the full communion of the Catholic Church but keeping their own tradition of prayer, spirituality and liturgy when these are compatible with the Deposit of Faith. Thus having Anglicans in our midst with their own "western rite" as it were, will be enriching to the Latin Rite of the Catholic Church. In a sense they will become "Anglican Rite" Roman Catholics but of the Western Rite of the Church.

The same could happen with many Orthodox Churches. They would simply be received into the full communion of the Catholic Church through a corresponding Eastern Rite to Orthodoxy.

I suspect even Lutherans could be accepted into their own rite, high Lutherans who have a liturgy and tradition of prayer similar to ours. Of course, as with all Anglican priests, their ministers would have to be re-confirmed and re-ordained. Both communions have invalid Holy Orders and thus an invalid Sacrament of the Most Holy Eucharist (Mass). But with some tweaking, as has already been accomplished with the Anglican Liturgy, even the Lutheran Liturgy could be brought to validity with a validly ordained priest.

Pope Benedict is the pope of Christian Unity. God bless his ministry!

This will bring a significant number of married "priests" into the Church. It is a foot in the door for secularism. The Church always ends up on the losing end of such compromises. I fear we are goind to see more "unintended consequences."

It most assuredly does sound Ecumenical. As you well know Father, that is the true definition and goal of Ecumenism. Not to reduce all religions to parity, but to restore lost Christians to the True Faith.

As for the married priests pinanv525 mentions, this is a true statement. However, they can never be Bishops, and married Anglican Bishops must surrender their authority and revert to being "just" priests. If I understand the terms of the offer to the Anglicans correctly, this offer is extended to existing ordained clergy only. New ordinations will have to comply with the vow of celibacy practiced by religious in the Latin Rite Church.

I understand that redundancy is depth. Given this quote from the blog post, “They are being incorporated into the full communion of the Catholic Church but keeping their own tradition of prayer, spirituality and liturgy when these are compatible with the Deposit of Faith.” I would like to say these thought of yours inspire depth!

Someone once wrote that the two most renowned advantages the ungodly one led were the Church splits and the denial of the ungodly one’s existence. Witnessing some re-unification of the major denominations (some Anglican and some Assembly types) as an element of the Church Militant is a gift from God at the very least.

I imagine Saint Charles Borremeo leading a procession of saints singing the Alleluias for this victory in the Church Triumphant!!!

At a time when Church leaders are being assailed on the continent, praise of the Pontiff does well to echo across the pond.

I am going to be ugly (and I pray I am wrong...and,yes,I am in favor of ecumenicism...the kind where everybody comes back to the True Church unconditionally), but I see trouble ahead. The existence of married priests in larger numbers will trigger protests anew from the "celibacy causes pederasty" crowd who really only use this as a way to attack the Church. They don't give a hoot about the kids or the Priests. They will be saying, "See! See!You have married priests aqnd it works just fine, blah, blah!" Not to mention that a large percentage of Episcopalians are academics, wealthy aristocrats and artistes, Deists, agnostics, and others who attend the Episcopal Church for aesthetic or social reasons only. They are also very vocal. Many of these will come over for the same aesthetic reasons ("Oh, John dear, let's give the Catholic Church a try. It can't be that much different from St. Pious' on the Quad.") and because, deep in their little hearts of darkness, they are not comfortable with homosexual priests, gay marriage, women priests, and sanctioned deviancy of every kind, either. But, once they get here, they will be just as obnoxious and just as vocal as they ever were. Trust me. I know these people. I know, terribly uncharitable, that. Pity.