CLINTON HAD UNNATURAL SEX WITH A VERY YOUNG WHITEHOUSE INTERN! 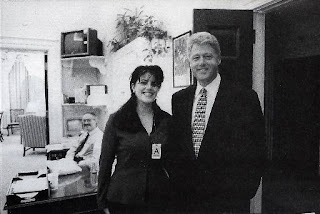 The Sex Abuse Scandal in the Catholic Church is not new news. It is as old as the hills and most of the cases being reported now throughout the world date back 30, 40 and 50 years ago. Germany is the latest country to have victims coming forward from as far back as 30 to 50 years naming names and circumstances of their abuse. They want to be compensated for pain and suffering. Their old news is now new news and making headlines throughout the world, now even in the Macon Telegraph! 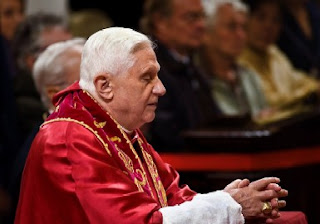 Because it is Germany, where the pope is from, because the liberal, secular press wants to discredit and undermine the power of the Church in Europe and in America, they are having a heyday with these so-called new revelations which now may indicate that Pope Benedict when he was an Archbishop in Germany in the late 70's may have handled abusive priests as many other bishops throughout the world did, poorly!

Folks this is not new news, it is as old as the hills. Yet undermining the Church and her Shepherds, especially the pope, and striking him down will enhance the liberal, secularist agenda of Europe and other places in the world: abortion, euthanasia, same sex marriage, socialism and the like.

This is what Catholics (clergy and laity) need to keep in mind and admit:

1. Up until about 1983, the sexual and physical abuse of children (pre-teens) in the home, in schools, in churches and elsewhere was considered a taboo subject and not to be discussed publicly and handled privately--this was a cultural pre-disposition and world wide. The pathological aspect of this was not understood or appreciated and most people wrongly thought sexually abused children would get over it.

2. The sexual abuse of teenagers, 13 and older, was considered a sin, not a crime and often this type of sex was thought wrongly to be consensual. Keep in mind that girls up until the 1990's in many states and countries including South Carolina could get married at 13!

3. The bishops of the Catholics Church until the late 1990's had no international policy on how to deal with priests who abuse pre-teens and teenagers, male or female. It was left to each bishop to decide but under general guidelines of Canon Law. Some bishops did a better job than others. There was a lack of understanding even in the world of psychology concerning the treatablity of priests who abused and what was recommended is that they be treated and recycled in ministry, meaning transferred from place to place. This is old news folks. It was wrong and stupid and led to the victimization of thousands of children. We know that now and the Catholic Church has paid heavily for that! But this is old news!

4. The loss of Catholic identity and priestly identity shortly after the Second Vatican Council (1965 to the present) as well as the sexual revolution of the '60's which taught us to "let it all hang out" contributed to and accelerated cases of abuse by the clergy. If everything is up for grabs in Church discipline, including dogma, liturgy, prayer, spirituality and sexual mores and celibacy and a strict code of conduct for those who profess celibacy or chastity, why are we surprised at what occurred and peaked in the 1970's the period of time when most cases of abuse are only now being reported, now Germany, Ireland and other European countries? Only a fool would be shocked. That priests and bishops did not do more to oust errant and abusive priests, but simply gave them a "wink and a nod" is truly shocking and a part of this "post-'spirit' of Vatican II" foolishness that continues to haunt the Church in other areas of her life! The Church in Germany, along with Holland, have been the most disobedient towards Rome,the Holy Father and the Hermeneutic of Continuity. They, along with their hero, Fr. Hans Kung, have been pushing for years a Catholic Church that is totally different than the one the Second Vatican Council sought to strengthen. This is a fact easily verifiable and certainly at the core of the chaos in the Church today.

5. Part of what was considered the "spirit" of Vatican II is subsidiarity. This means allowing the local Church, i.e. bishop and diocese, to make decisions on the lowest level. Thus the Vatican was reluctant to interfere with the decision making processes of bishops locally or even to promote a national policy on sex abuse in various countries. This only changed beginning in 2002 in this country with national sex abuse policies. But most countries throughout the world have not followed the USA's lead. It is here that the Holy See and the Holy Father need to be more explicit with all world bishops.

6. That Pope Benedict as an Archbishop in Germany in the 1970's more than likely handled offending priests as most other bishops throughout the world and based upon cultural attitudes at the time concerning this taboo subject should not surprise anyone.

7. The Catholic Church and her bishops have apologized for their part in the abuse of minors. The Catholic Church as far as I am aware is the only institution in the world taking steps to publicly disclose the scope of the problem and put into place policies to help reduce this problem in the future. Most other religious and secular institutions that have children and teenagers under their charge have not done the same and the scope of abuse in these institutions is as high if not higher than in Catholic institutions. The press does not report that. I wonder why?

8. Most of the new policies coming forward in the Catholic Church are at the encouragement and direction of Pope Benedict XVI.


Finally, the whole reason for God's action in human history is to save us from sin and death and from the Evil One. There is and always has been "spiritual combat" with the forces of evil that tempt mankind, infiltrate God's people and sometimes possess them. Demonic influence and possession reaches high places in the Church that Jesus founded. But Jesus has already won the victory! His Holy Spirit preserves the Church from self-destruction. The "gates of hell" shall not prevail against her, try as the Devil may.

We should not be surprised that the drama of sin and evil continues to play out in the Church until the Lord returns and judges the living and the dead as well as all that the Lord has required the Church to accomplish until his return. That judgment is already occurring. The sheep and the goats are already being separated. Are we shocked? Only those who do not understand Church teaching are shocked and appalled. Unfortunately, thanks to Satan, we have two or three generations of Catholics, many of them now fallen away, who just don't know their faith, don't believe in Satan and don't know about the "spiritual battle" that will last until the Lord returns. That's another scandal too, but the secular press doesn't care about that, they see ignorance of the Church and her teachings as good news for their secular, "dictatorship" agenda!

The powerful secular press is after Pope Benedict and his war on the dictatorship of relativism. Please pray for the Holy Father: 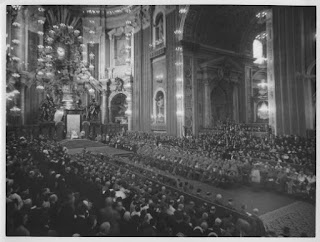 V. Let us pray for Benedict, our Pope.

R. May the Lord preserve him, and give him life, and make
him blessed upon the earth, and deliver him not up to the
will of his enemies. [Ps 40:3]

O God, Shepherd and Ruler of all Thy faithful people, look
mercifully upon Thy servant Benedict, whom Thou hast chosen
as shepherd to preside over Thy Church. Grant him, we
beseech Thee, that by his word and example, he may edify
those over whom he hath charge, so that together with the
flock committed to him, may he attain everlasting life.
Through Christ our Lord. Amen. 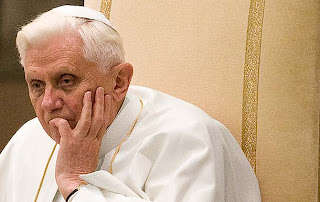 Your final comments says it all. I will pray for our Holy Father and the Church. Thank you Father.

Father you might want to have a look at this morning's Vatican News release.

I also thank you Father

While dealing appropriately with any abuses, the Church needs to ignore any clamor from the secular media. They only desire to weaken the Church. They sanction or ignore any deviancy whatever. People have gay sex in the streets at some big festival in San Francisco every year, a history of adultery or unnatural sex seems to be a requirement for election to Congress,and sexual scandals of all kinds have come from Protestant churches...we all remember the choir directors who were "just so good with the young people," or the kindly preacher who "is just so concerned about our young women and girls." And, who was the local (Macon) Baptist preacher a few years back, Mike something or other, married with kids, who bedded half the women in the congregation and stole the church's money, left that church and was hired by another Baptist church right across town in a couple of years. This was all over the newspapers back then. Please.
No organization, secular or religious, has any moral high ground from which to direct barbs at the Church. Pray, go to Mass, and go to Confession for your homicidal thoughts toward members of the media.

The abuse of children by clergy has been predominantly homosexual. That is, priests abusing young boys and teens. Over 80% of cases in the US fall into this category according to the John Jay Report. Do you hear any outrage directed towards the lavender mafia and its fellow travelers and apologists?

Of course not. The hypocrisy which surrounds this issue is palpable. For instance, the recent Vatican document on seminary life which once again advised against the ordination of homosexuals was greeted by the usual cries of outrage from the secular media and the gay lobby. In a sane world, it would follow logically that if homosexual clergy are responsible for most of the abuse cases, then it's probably a good idea for them to be excluded from seminaries, aside from any theological and psychological considerations concerning homosexuality.

Unfortunately, our world is not sane. It screams ""evil"at the Church over sex abuse and then screams "discrimination" in the same breath when the Church attempts to exclude those responsible for most of the problem.

Back in 1962 the Church handed down a document which said flatly "no homosexuals to be ordained." It was ignored and we are now reaping the consequences. As the vocations crisis began to bite, anyone who could fog a mirror was let in.........except of course, those who were seen as too "rigid" and "pastorally unsuitable"; i.e. they hadn't drunk the "spirit of Vatican II" Kool Aid and still maintained allegiance to the Pope and the teaching magisterium.

Yes, we need to pray but we need to do more. We need to sacrifice and practice self-denial. Those are the things which give power to our prayers as the saints have shown us by their example.