FOLKS THE REFORM OF THE REFORM IS WELL UNDER WAY AND THE HOLY FATHER, POPE BENEDICT XVI KNOWS WHAT HE IS DOING. WE HAVE A GREAT CAPTAIN AT THE WHEEL OF THE BARQUE OF SAINT PETER! WOW! FASTEN YOUR BOAT BELTS! Questions and answers and my editorializing below these great pictures that model what the pope wants! May all the bishops of the world model the same thing, please God!

The pope showing us that this is perfectly ordinary for the OF Mass! 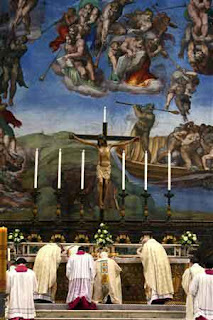 His Holiness modeling for us that this altar arrangement is very ordinary for the OF Mass! 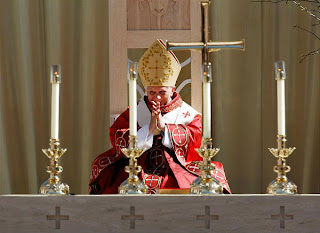 The Holy Father modeling for us that this is perfectly ordinary for the OF Mass! 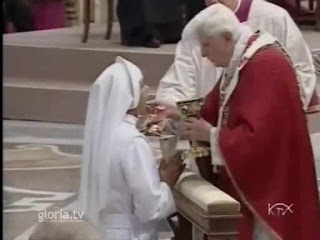 The Holy Father legislated that every priest and every lay person can celebrate the EF Mass, have an EF wedding and an EF Funeral. The Holy Father though, hasn't modeled how to do this correctly, because the liturgical books say it all and quite in detail! 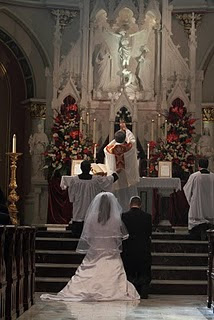 My comments in bold print below each question and answer:

[Q:] What did you have in mind on January 6 when you talked about a “reform of the reform”?

[A:]To tell the truth, I didn’t use this expression as something of my own, but as a phrase used by several others for many years, including, of course, the former Cardinal Ratzinger. I didn’t want to get into the details of what various people might mean by the expression, because there are different ways of understanding it. I believe that [NB] the best way, the most correct way, to understand the expression is certainly not to reject the reforms determined by the Second Vatican Council. Rather, it’s to take another step forward in the comprehension and experience of an authentic liturgical spirit,carrying together the inheritance of our tradition with the reform that the council accomplished, in a spirit of development in continuity.


The papal MC is brilliant. He has placed the reform of the reform within the context of the hermeneutic of continuity with all of the great Councils of the Church. Vatican II did not create a new Church. It is the same Church! What were the reforms of Vatican II? Read the documents. There is no rupture with Tradition in these documents! What Pope Benedict is doing is bringing to the Church's OF Liturgy a hermeneutic of what is possible with it and in continuity with the EF--we're not going in a progressive, deconstruction path with the liturgy--we're going traditional! That means in continuity with our great Tradition. Don't you get it?

[Q:] Of course, the former Cardinal Ratzinger also once warned against new upheavals in the liturgy, saying that we need a period of stability. Do you agree?

[A:]Yes, yes … I’m fully in agreement! I don’t believe that the liturgy of the church needs any radical changes or distortions, in part because it’s not in the logic of this spirit of development in continuity. I believe instead that it’s a matter of consolidating what already exists, in a more authentic way, according to the true mind of the church.


The Liturgy of the Church needs no radical changes or distortions! What have liturgists in the last 45 years try to do to the official liturgy and rubrics of the OF Mass? Distort them with creativity galore and thus trivialize the most important aspect of Catholic identity, spirituality, Faith and Tradition, not to mention ethics and morality! Doing the red and reading the black, meaning celebrating the Mass as it is prescribed, following its rubrics and not making it up as you go or imposing the priest's and congregation's personality on it is indeed the authentic way to renewal, "according to the true mind of the Church!" Get it? This is radical folks! We see what Pope Benedict has in mind!

[Q:] You spoke about some more traditional touches in Pope Benedict’s liturgies, such as placing a cross on the altar and giving communion on the tongue. If I understand correctly, you’re not suggesting that these are harbingers of new liturgical policy for the whole church.

[A:]The pope has proposed, and proposes, these solutions. It’s the style of the present pope to proceed not though impositions but propositions. The idea is that, little by little, all this may be welcomed, considering the true significance that certain decisions and certain orientations may have. That seems to me a typical touch of Pope Benedict.

Whether sometime in the future, what the pope’s presenting in this propositional way should become more of a disciplinary norm, we don’t know and can’t say. Certainly, the style at the moment is to offer proposals for the celebrative style of the church. Nevertheless, when the Holy Father proposes, it is not simply his personal preference, but a precise and clear orientation for the whole church.

This papal MC is brilliant! What the pope is modeling for us in the OF celebration of the Mass is "a precise and clear orientation for the whole church." He has already celebrated Mass publicly "ad orientem." This is acceptable folks--bishops need to see that and hear this! This is how the pope is persuading them, after all they can either permit or disallow these things by asking priests to be obedient to their wishes even if these are not in continuity with what the pope is modeling and not yet mandating. The pope is trying to persuade bishops first, priests second and laity finally! If this pope lives long enough, or if I live low enough, there will indeed be legislation. It's coming folks, but "brick by brick" as one other brilliant commentator has posed it!

[Q.] That raises a broader question. Benedict XVI clearly has a strong liturgical vision, but to date hasn’t launched any sweeping liturgical reform. You seem to have already suggested why not: His strategy is to propose rather than impose. Is that right?

[A:]I would say so, yes. It seems to me that he has a vision rooted in great faith in the life of the church, which of course has its own sense of time and its own rhythms. Given certain realities, as well as the times in which we live, sometimes things can’t just be imposed quickly. They have to slowly enter into the way of thinking of the church, its way of feeling, its climate. Within that, maybe one can eventually arrive at providing a more precise disciplinary norm, but perhaps first it is helpful to shape a climate of opinion.

Again, what a brilliant man, a man after my own heart! The pope has to persuade the Church to do things the way he is leading and yes he is leading! You can't impose things on an unwilling people, especially bishops! But think about this: In Sumorum Pontificum Pope Benedict legislated that every priest in the world has the right to celebrate the Extraordinary Form of the Mass--this is legislation and bishops have to allow it, just as they have to allow priests to celebrate the OF Mass, both are now on the same playing field. But have you noticed that the Pope has yet to publicly celebrate an EF Mass, that he hasn't modeled for the universal Church a celebration of it? He legislated this new freedom for the priests and congregations of the Church without modeling it since this is a part of the patrimony of "continuity" that the pope is promoting--authentic renewal in continuity with our Tradition. You simply celebrate this Mass as written and you have what the Church wants.

With the OF Mass, the pope has to model what is not in the explicit rubrics of the Mass or the custom in which this Mass has been celebrated in the last 45 years. Customs that have developed have been built upon a false premise--rupture with the previous Mass, dubiously new and unimproved instead of renewed and reinvigorated. So the pope is adding new customs and rubrics to the OF Mass without legislating these first--that will come in time, like ad orientem for the OF Mass, tighter rubrics for altar decorations, kneeling for Holy Communion and on the tongue, Gregorian Chant, singing the introit, offertory antiphon and communion antiphon that is prescribed rather than substituting metrical hymns of dubious quality and content. All of these things the pope is modeling already exist in the EF Mass, so no need to model it there! Model it with the OF Mass that has been celebrated in such an "impoverished" way due to a lack of clear, consise rubrics and sloppy, God-awful creativity and casualness! The Reform of the Reform is in full swing.

What has already been legislated:

1. New GIRM in 2001
2. New Missale Romanum for the OF in Latin in 2002
3. New English Translation of the 2002 MR Missal--due Advent 2011!
4. Sumorum Pontificum legislating that every priest of good standing in the world can celebrate the EF Mass! This is stunning!!!!!!
5. Coming before the Second Coming, new rubrics for the OF Mass as being modeled by His Holiness, Pope Benedict XVI! Just you wait and see!
Posted by Fr. Allan J. McDonald at Thursday, March 04, 2010

I fear the Pope needs to decree these things, else the Pater Ignoti among us will view them as mere matters of "taste."

Pray for this Pontificate and the Holy Father's continued good health in the years to come. This and probably this alone will ensure the legislation to back up his example. I would however like to see Our Holy Father (that is our as in followers of the NO Mass and Tridentine Mass) celebrate both forms of the liturgy. For love of the Tridentine Liturgy we can look no further than Rome and our beloved Pope to celebate it. It's absence from Papal liturgical practice leaves a void in the hearts of those who love to see this liturgy celebrated by Our Pope. To celebrate this liturgy alongside the NO will only help cement by example and draw a correlaion between the two forms of Mass as they should be celebrated. I do not believe it would derail efforts to set an example of the urgently needed reform of the NO. To move forward into the next Pontificate and see some of the progress disappear without the needed legislation would be heartbreaking to many. None of us have any idea who the next Pope will be, his style, or even agenda of his Pontificate. Pray for the Holy Father..Pray he has time to do the many things he needs to do as Peter, head of the Holy Catholic Church.