AMERICAN CELEBRITY NOW CONTROLS THE CULTURE AND EVIDENTLY THE MONARCHY OF ENGLAND HAS FINALLY THROWN IN THE TOWEL! 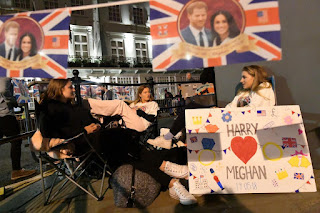 Princess Diana was like an American Hollywood celebrity icon--that is why American loved her and her children, especially Harry who broke the icon image of the stuffy English monarchy, out of touch with celebrity concerns.

America has once again conquered the British monarchy but this time by the cultural movers and shakers of America's "Hollywood."

Who would have thunk?  The Trojan Horse filled with American celebrities who shape worldwide culture was opened by one of Britain's own, Princess Diana and her son Harry brought the final defeat to the monarchy by marrying an American Hollywood celebrity. Cool no?

Princess Diana was a nitwit so no wonder the American media (comprised largely of nitwits) loved her.

Firstly, Meghan Markle was not a celebrity - she was a television actress whom nobody here had heard of. The romance between her and Harry seemed to move very fast, but since he was the most eligible bachelor in England, with the pick of any number of women, this seems to have been a love match.

And there is no doubt that she is exceptionally pretty (and has a gracefulness which belies her background). She has now taken on a new role. Harry is only sixth in line to the throne, so his choice of bride is of little consequence to the monarchy, unlike Edward VIII's choice of Wallis Simpson.

When Charles married Diana in 1981 it was clear even before the wedding that the couple were not suited. He was 34 going on 40; she was 20 going on 16. Yet he is the heir apparent and his wife will be queen.

American popular culture has influenced Europe since the early 20th century, with jazz and the movies. It is not necessarily reprehensible. 'Celebrity culture', fed by the tabloid press, is probably more rife over here than in the USA; it is a homegrown weed, not an exotic import.

Another “Let’s talk endlessly about how silly & unimportant this event is” topic.

I’m sure if Queen Mary were alive she would have had a lot to say about that wedding. But the Saxe Coburg Gotha’s, I’m sorry, the House of Windsor knows where their bread is buttered and will go along with anything to keep their money, jewels and castles. Prince Charles would allow himself to be crowned by a Muslim Iman if it meant keeping the throne. And all for money. That’s why divorce isn’t a problem, living in open fornication isn’t a problem, adultery isn’t a problem, gay marriage isn’t a problem and on and on Nd on. They will blow with the wind to keep what they perceive as theirs. Oh those Germans.

By the way, have you read Prince Charles’ book “Harmony: A New Way of Looking at Our World”? I recommend it to everyone here:

Actually I was watching a CNN story this morning on the royal wedding and the English reporters were gushing over Meghan and all the celebrities who attended from Elton John and his husband to her TV husband on Suits. Then they compared Megan's mother and her loving emotional reactions to the stoic Queen and her side of the family.

My father who was Scottish Canadian warned his three young children with their Italian--Georgian attitudes in 1962 when we visited his siblings in Nova Scotia not to mock the Queen, at it was Queen Elizabeth then too, and not to offend his Canadian relatives and friends who loved THEIR Queen and monarchy by any snarky superior remarks.

After my first visit to Canada 🇨🇦 , I came back a Royalist and thus found the elitism of how much better American celebrity and their shaping of even the Monarchy is compared to my royal heritage offensive as would have my Canadian father.

As a former subject of the Queen, I protest!

LOL. Socialism is the answer? Like Lady Thatcher used to say:


"Socialist governments traditionally do make a financial mess. They always run out of other people's money. It's quite a characteristic of them."

"...keep their money, jewels and castles."

The Queen and her family are wealthy on their own. "Forbes magazine estimated the Queen's net worth at around $500 million (about £325 million) in 2011, while an analysis by the Bloomberg Billionaires Index put it at $425 million (about £275 million) in 2015. In 2012 the Sunday Times estimated the Queen's wealth as being £310 million ($504 million), and that year the Queen received a Guinness World Record as Wealthiest Queen. The Sunday Times Rich List 2015 estimated her wealth at £340 million, making her the 302nd richest person in the United Kingdom; that was the first year she was not among the Sunday Times Rich List's top 300 most wealthy since the list began in 1989. She was number one on the list when it began in 1989."

That wealth is personal. They also own, personally, a few of the castles they inhabit. Sandringham House and Balmoral Castle are privately owned by the Queen.

Many of the jewels worn by the Queen and other royals are their personal property.

So what? No-one can run for US President unless he is very wealthy. A British Prime minister does not need a private income, and the salary he (or she) is paid is derisory by corporate standards.

Which is the more democratic system? After all, the Queen has no power, whereas the POTUS heads the executive.

I’m not sure I get your point. Anyway, it sounds like a non-sequitur. Just because I lament Mammon’s perversion of conservatism does not mean I am advocating socialism.

By the way, you think you have seen socialism. You haven’t. I have, as has John Nolan. We both had to live under real socialism in the U.K. Real socialism isn’t pretty, and what is labeled “socialism” in the United States is not even close—by a long shot. It’s mainly a “scare” word used by the Right in the U.S. to short-circuit or prevent the critical thinking of their tribe, whereby the S word replaces the L word (liberal), in much the same way as the R word (racist) or the F word (fascist) is used by the Left to short-circuit or prevent critical thinking of_their_ tribe.

Such unthinking labeling goes along with a disregard for facts and the truth in an idiocracy such as our Republic has become.

"Then they gushed over the American style of preaching, which I personally like, with its highly polished African American style"

A British appraisal, from the wonderfully refined Fr. Hunwicke:

"What a cheap fool that American 'bishop' is"

I myself wondered what such a "cheap" sermon was doing in a place like that.

You want to talk about scare words? Well the political left (your bosom buddies) do this to shut down debate and avoid critical thinking:

I could go on back I would hope you get the point.

Now you are just irritating. Do you actually read what I write or do you just reactively emote?

You need to pay more attention to what Anon 2 actually writes. I lived in England in the second half of the 1970s. Inflation running at 25 per cent, spurred on by a Labour government which caved in to the exorbitant pay demands of the Unions who were its paymasters. A top tax rate of over 90 per cent.

Those same Unions, through official and unofficial strikes, deliberately set out to destroy British industry, and largely succeeded. Jack Jones, one of the Union magnates and a frequent visitor to 10 Downing Street, was exposed after his death as a Soviet agent.

The nadir was when a bankrupted UK had to apply to the IMF for a bale-out. That's socialism for you. Try living in Venezuela, which has massive oil reserves but is a basket-case economically thanks to corrupt socialist leaders.