A GREAT ARTICLE ON THE MAGNIFICENT PONTIFICAL EF HIGH MASS AT THE NATIONAL BASILICA-SHRINE OF THE IMMACULATE CONCEPTION IN WASHINGTON, DC

Press the title for the National Catholic Register's great article with more photos! 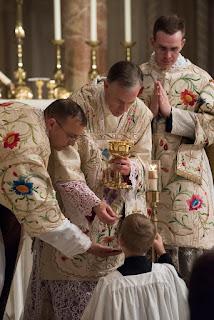 ‘Liturgy of Timelessness’ at the National Shrine in Washington

Archbishop Alexander Sample celebrated a pontifical high Mass at the Basilica of the Immaculate Conception Saturday.

Abp Sample: “As I learned it,” he continued, “I began to have a deep appreciation for it — the beauty of it, the reverence of it, the prayerfulness of it. So there is a personal affection that I have."

The EF is inherently reverent. With the OF, reverence has to be brought to it within the limits it sets forth.

Isn't this the point? It is a tie that binds generations together in a timeless way. It is authenticity. Both masses result in the eucharist. Both masses are valid. But, the EF is grounded in a way that the OF lacks and, to me, it is the strength of that grounding that explains why younger persons are attracted (in part) to this expression of the Church's liturgy.


It seems to me that Catholics expect different things from each version of the Mass. Those who prefer the NO expect an hour pleasantly spent with familiar faces, a nice chat before and after the Mass with friends. They see the NO as part and parcel of the general culture. The music is contemporary and would be easily forgettable except much of it is crypto protestant or frankly so. The congregation's attitude on a variety of touchy issues is largely ambivalent. For example, same sex marriage or communion for those in second marriage without annulment are apt to be approved by most of such pew sitters.

The attitudes of the EF attendees is to pray before Mass not chit chat. Rosary as a group or individual prayerful preparation. The music is chant or other traditional hymns. For an hour or two (after traveling the same amount of time to get there and get home) they are in the company of like minded believers and experience strong, authentic community even when not networking with each other. They will hear homilies that will not gloss over life issues and certainly not endorse the values of the the prevalent secular culture.

It is not easy to swim against the cultural tide. But it is worthwhile. Jesus did the same in His time.

Very apt observations. Instead of Vatican Disaster II improving the culture, the culture has corrupted the Church (well at least the folks who run it). There is no bravery, no intellectual rigor to be found with those who support popular culture. Quite the opposite.

What do you call the "V-neck" chasuble in the picture---Gothic? Fiddlestick?

Breaking your own rules again, I see. "Fiddlestick?" Go back to kindergarten if you want to play games.

With a link to the video.