TO ELEVATE OR TO SHOW? THAT IS THE QUESTION 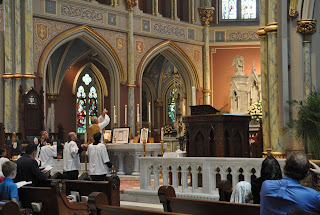 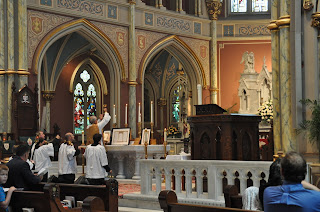 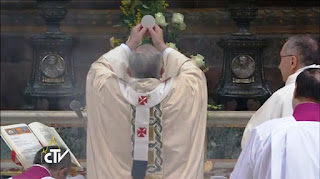 My recollection of the pre-Vatican II Mass as a child when it was the Ordinary Form, so to speak, was that the two major elevations of the consecrated Host and Precious Blood in the chalice was the high point, so to speak, of the Mass, that magic moment of the laity's profound devotion to our Lord, adoration and worship of the newly consecrated "Accidents."

Of course the high elevations were necessary for the "showing" of the  "Accidents" as the priest was facing the same direction as the laity, not in the clericalism of confrontation as we have when he faces the congregation. Thus the elevations had to be high in order to be seen above the priest's big head, such as mine, as you will note in the two Cathedral photos above.

Most priests immediately following the change from ad orientem to facing the congregation in the 1960's continued the high elevations.

It wasn't until the 1970's that academic liturgists at their workshops for priests told them that they should only show the "accidents" without elevating since there was no need to elevate since the Host and Chalice could be seen even at the chest level of the priest.

And God forbid if there were lengthy elevations as these turned the elevations into "magic moments of visual adoration" when of course the Bread and Wine are food and drink to eat and drink not gaze upon. Those damn liturgists need to be condemned to the darkest corner of hell with all the unconsecrated hosts and wine they want, mold covered and sour!  What dictators, what bullies what academic idiots!

Of course, I elevate high when facing the congregation, but not quite as high as when I offer Mass ad orientem.

The Elevations are quite extraordinary. A great example of how those pesky "accretions" enhance our worship by more fully making real the doctrine.

I can't address your questions, but at the traditional parishes around here, there is the practice of ringing the tower bells at the high mass during the elevations, along with ringing the bells at the altar. This is such a great practice: Our 2 year old really loves the ringing bells, and they immediately draw her attention to the altar, even if for a brief instant!

In the case od versus populem elevation it seems the priest would want people in the back of the congregation to see the Real Presence, too. Unless it is assumed they can see the priest and that is enough.

LOL. THis comment reminds me of the left-wing loon English translations eminating from the comme le prevoit approach to translating the Latin. Instead of "Behold the Lamb of God" we got "This is the Lamb of God." Kind of like saying this is the dog, this is the cat. Sheesh

So, according to the liturgical "masterminds" of the day, the priest must face the people but, only "show" the consecrated species but, not to much. I suppose extended elevations might take way from Rev. Fr. Entertainer putting the focus on our Lord. We must not have that. Such silliness. Reason 8,756,241 why ad orientem should be reinstated as the norm.

The practice of elevating the Host was introduced in the late 12th century, most probably to refute those theologians who maintained that transubstantiation of the bread occurred only after the consecration of the chalice.

However, by the time of the Reformation it had come to symbolize belief in the Real Presence. Queen Elizabeth I was crowned according to the Catholic rites restored in Mary's reign, but made her Protestant credentials clear by withdrawing before the elevations. (Note that in the Sarum Use there are no genuflections.)

When Protestantism was re-established, elevation was prohibited (Article 28 of the 39 Articles of Religion).

In the Novus Ordo the priest is only enjoined to elevate the elements at the Per ipsum. So the 'minor elevation' of the Roman Rite has become the 'major elevation' in the NO when it is celebrated versus populum. This is, of course, a significant and deliberate shift of emphasis. When the NO is celebrated ad apsidem this is much less noticeable, for obvious reasons.

The custom of ringing the tower bell at the consecrations was so that those working in the fields could pause and kneel.