FINALLY THE POPE IS SAYING WHAT WE ALL KNOW ABOUT THE SEXUAL ABUSE CRISIS IN THE PRIESTHOOD OF THE CATHOLIC CHURCH AND THE ENABLING BISHOPS WHO ARE ULTIMATELY RESPONSIBLE FOR THOSE THEY ADMIT TO THE SEMINARY, ORDAIN AND SUPPOSEDLY SUPERVISE AND TRANSFER OR DISCIPLINE

UPDATE! UPDATE! UPDATE! I HAVE REPLACED THE FR. Z STORY ON THIS WITH THE ACTUAL VATICAN INSIDER ARTICLE WHICH THEY TRANSLATED FROM THE ORIGINAL ITALIAN INTO ENGLISH

During the height of the sex abuse crisis in the USA, there were those in the Church and secular society who took great offense when others in the Church and outside would say that in the Catholic priesthood version of sexual abuse of minors its root cause, as the priest is concerned, is homosexuality and arrested sexual maturity and morality.

I challenged a nationally known priest who kept saying at a conference many years ago that we should not blame homosexuality.

Now the highest authority in the Church has overcome this nasty political correctness concerning homosexuality and  is saying precisely what anyone with a bit of common sense and an ability to discern has been saying for decades now. I am glad that Pope Francis isn't comforting abusive priests by saying God loves them and made them that way!

FROM THE VATICAN INSIDER, ENGLISH EDITION:

“If there is any doubt about homosexuality, it is better not to let them enter the seminary”

The Pope’s words in a conversation behind closed doors with the Italian bishops: “discernment is needed”. Along the lines of the 2005 and 2016 Vatican documents 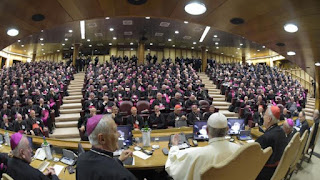 salvatore cernuzio
vatican city
“If in doubt, better not let them enter”. With the bishops of the Italian Episcopal Conference, with whom he held a three-hour dialogue behind closed doors on the occasion of the 71st General Assembly, Francis addressed the extremely delicate issue of the admission of homosexual to seminaries. Pope Bergoglio expressed his opinion on the question, repeating de facto what he had already said a few years ago, albeit in a more implicit way: “Keep an eye on the admissions to seminaries, keep your eyes open”, he said in an audience with the Congregation for the Clergy.
Speaking of the fall in vocations with the pastors of the Italian Episcopal Conference (CEI) - Vatican Insider learns – Francis - in telling one of his “three concerns” for the Italian Church - was instead franker as he invited the bishops to focus more on the quality, rather than quantity of future priests, explicitly mentioning the cases of homosexual persons who wish, for various reasons, to enter the seminary. He then invited the bishops to “careful discern,” adding: “If you have even the slightest doubt, it is better not to let them in”.

An indication, this one of the Pope, that expresses his deep concern: these tendencies, when they are “deeply rooted”, and the practice of “homosexual acts”, can compromise the life of the seminary as well as that of the boy himself and his possible future priesthood. And they can generate those “scandals” of which the Pope had spoken in his opening speech to the CEI assembly in the New Hall of the Synod - which disfigure the face of the Church.

Between the lines one can read what Pope Francis had already written in the letter personally handed to the Chilean bishops during their meeting in the Vatican. In an additional note, the Pontiff denounced the problems that had arisen in the seminaries where - he wrote - bishops and religious superiors had entrusted the guide to “priests suspected of practicing homosexuality”.

Of course, any comparison is inappropriate, cases are different and any generalization must be avoided. The Pope’s note to the CEI bishops can be traced back to the Ratio Fundamentalis published in December 2016 by the Congregation for the Clergy: a substantial document, entitled “The Gift of the Priestly Vocation”, with which the dicastery updated the norms, customs and habits to access the seminary, providing practical advises also on health, nutrition and physical activity among others.

Point 199 of the Ratio states that: “In relation to persons with homosexual tendencies who seeks admission to Seminary, or discover such a situation in the course of formation, consistent with her own magisterium, the Church, while profoundly respecting the persons in question, cannot admit to the seminary and to holy orders those who practice homosexuality, present deep-seated homosexual tendencies, or support the so-called gay culture”.

These are the indications of the 2016 “Ratio”, which in fact reiterate what was established in the Instruction published by the Congregation for Catholic Education in August 2005 on the theme “Criteria for vocational discernment regarding persons with homosexual tendencies in view of their admission to the seminary and to sacred orders”.

In nine pages and about twenty notes, the document, approved by the then Pope Benedict XVI, reiterated the Holy See’s “no” to the entry into seminaries and religious orders of priests who “practice” homosexuality, have “present deep-seated homosexual tendencies” or even support “so-called gay culture”.

First of all, a distinction was made between “homosexual acts” and “homosexual tendencies”: on the former, the Church reaffirmed the definition of “grave sins”, “intrinsically immoral and contrary to the natural law”; while it demanded to those who manifest tendencies, defined as “objectively disordered”, an acceptance marked by “respect and sensitivity”, and that “Every sign of unjust discrimination in their regard should be avoided”.

In any case, even a mere doubt about the homosexual orientation of the candidate to the priesthood - according to the indications given in the Instruction - could be an obstacle on his way to ordination. “If a candidate practices homosexuality or presents deep-seated homosexual tendencies, his spiritual director as well as his confessor have the duty to dissuade him in conscience from proceeding towards ordination” says a paragraph.

And in another paragraph of the same text, aspiring seminarians (with a homosexual orientation) were invited not to lie to their superiors in order to enter the seminary. “ It goes without saying that the candidate himself has the primary responsibility for his own formation”, the Vatican text reads. It would be “gravely dishonest for a candidate to hide his own homosexuality in order to proceed, despite everything, towards ordination. Such a deceitful attitude does not correspond to the spirit of truth, loyalty and openness that must characterize the personality of him who believes he is called to serve Christ and his Church in the ministerial priesthood”.

Finally, we must not forget another risk pointed out by Pope Francis in his speech to the Congregation for the Clergy, and that is that often “there are children who are mentally ill and are looking for strong structures to defend them”.
Posted by Fr. Allan J. McDonald at Thursday, May 24, 2018

In a number of dioceses in the United States, the homosexuals are still in control. They will continue to admit their own kind. They will make it difficult for others to enter and they continue to make make it impossible for those who do not go along.

This going to become a full on legal battle focused on human rights.