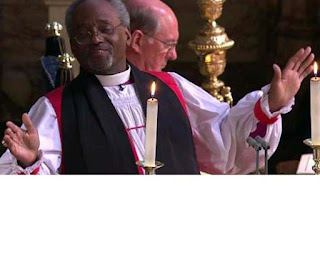 I am not as harsh in my critique of the Episcopal Black bishop's sermon. His style of preaching is the "black Protestant" style that many white preachers, even Catholic priests, in the USA at least, try to imitate. It is a cultural thing and I wouldn't slam it in the Black Community, although I know for a fact that African American converts to Catholicism from the strong black Catholic schools we had back then and with their experience almost daily of the Latin Mass of the pre-Vatican II Church usually converted to Catholicism to get away from the acting, screaming and hollering associated with black pentecostals or the black protestant Church. They saw that flamboyance for what it is.

I also thought the content of the sermon was very good.

Acting is the problem with this style of preaching, though, and can lead to celebrity preachers especially when they have 13 minutes of fame and celebrity at an internationally televised event.

But this is Fr. Hunwicke's take on that Royal Wedding:

... just carries on and on in the Meeja.

I can only say that I find aspects of it puzzling and alienating.

Some things I just don't even begin to understand: such as why Ms M keeps describing herself daily as a Feminist while apparently happy to be called a Duchess simply because she has married a Duke.

Alienating? The host of  'celebrities' invited to the party alienates me. I suppose in a different age the 'invitees' might have been from other Royal Families, from the Bitish Aristocracy, and from people in our public or political life. Like most ordinary Englishmen, I could discover members of aristocratic families among relations by marriage, or Oxford acquaintances, or former pupils. Foreign Royalty? I met on comfortable terms the late King of Romania; and a Duke of the House of Bourbon. I have mingled socially and bibulously with Members of Parliament. Being quite a small nation, we are comfortably integrated and surprisingly egalitarian.

But all these International Celebrities ... I think they are known technically as "A-list" ... Sir Elton John ... Clooneys ... Serena Williams ... Ophra Winfrey ... Batman, probably ... etc. etc. ... there is not a snowball's chance in Infernis that I have or ever could run into any of them, such is their inaccessible greatness. They are of a mighty altitudo far, far above my humiliated reach. I imagine they are the sort of people whose doings are related in the glossy Celebrity magazines one sees adolescent girls devouring in omnibuses. Looking at the TV clips of those confident lordlings striding into Windsor Castle, I knew how the French must have felt when Herr Hitler visited Paris in 1940 and was photographed in front of the Eiffel Tower.

Incidentally, according to the Times, the music played included Greensleeves ... and the wedding took place on the anniversary of the day Anne Boleyn lost her head. And there was a Henry with Welsh connections involved in all that, too ... perhaps I should take more interest in the blacker implications of last Saturday's events ...

What a cheap fool that American 'bishop' is ... it would be fun to see him taking part in a 'historical  reenactment' in the road outside the front door of the Master of Balliol.
Posted by Fr. Allan J. McDonald at Tuesday, May 22, 2018

"What a cheap fool that American 'bishop' is ... it would be fun to see him taking part in a 'historical reenactment' in the road outside the front door of the Master of Balliol."

I think it is inappropriate for Americans, generally, to comment judgmentally on the Royal Family except to say that her dress was nice, Harry is handsome, etc. What I will say is that weddings in general, and royal ones in particular, are pagents of the wedding parties’ alliances; those with whom they are most closely affiliated and associated; those who are on their side, as it were. The group that were salient among this event’s attendees are fickle and dubious as to the influence one might want on any member of the Royal Family, however distant they are from the throne.

Dogwhistle racism? Apparently, it's in the eye of the beholder.

The southern bible-belt street-corner preachers, who once were ubiquitous in this area, made "cheap fools" of themselves--in my view and that of most I knew--with the same homiletic style employed at The Wedding. They were all white; don't recall ever seeing a black one.

Hunwicke: "What a cheap fool that American 'bishop' is ... it would be fun to see him taking part in a 'historical reenactment' in the road outside the front door of the Master of Balliol.

"The cross in the pavement opposite the door of the Master of Balliol's present house was put down by ignorant persons within the last fifty years without the slightest authority for that site. Whereas the kerb-stone of the pavement opposite the college gate, there is a large mass of wood ashes extending over a surface of several yards, and there is some reason to believe that this was a place of execution." The Gentleman's Magazine, July 1861.

Except that in England we did not burn negroes. That was done in the 'land of the free and the home of the brave' well into the 20th century.

Perhaps this latest Anonymous might give some clue as to his identity? I can understand his not wishing to divulge his name but for once, it's clearly not Kavanaugh.

Lynching in Britain is not new. In a government file at the Public Record Office labelled `Lynching of coloured men in Britain', there is a letter by F.E.M. Hercules, Secretary of the Society of Peoples of African Origin. Addressed to the Secretary of State for the Colonies on June 12th, 1919, it states:

(We) wish to draw your attention to the lynching of men of colour ... Will
HMG take adequate measures for the protection of British subjects? ... In
the society's view it is desirable that an inquiry be held into the
circumstances attending the death of Charles Wootten.

Charles Wootten, a West Indian ship's fireman, was caught up in anti-black rioting which swept many British ports in the first six months of 1919. Recently discharged from war service, Wootten was chased into the Mersey by a Liverpool crowd of over 200 people. The mob stoned the young man until he sank. Nobody was arrested for this murder, despite a police presence on the river bank.

In any case the slander from anonymous was a trolls dart intended to disrupt the conversation. It is also a true racist remark attempting to deflect and interdict criticism solely by the color of the bishop and not the actual merits of his sermon. We are to beleive the critic is racist because be is white and the bishop deserves a pass because he is black and therefore only able to clear a lower standard. It is charitable of us to hope that this particular anonymous is only a dishonest person and not actually that profoundly stupid.

The 1919 race riots in Liverpool and other port cities need to be seen against a far wider political and social unrest which saw tanks deployed on the streets of British cities and the battleship HMS Valiant moored in the Mersey.

In all there were five fatalities; two were black (including Charles Wootten), one was an Irishman, John Donovan, who was taking part in a raid on a negro boarding house in Cardiff led by Australian soldiers and was shot dead; the other two were also white and were set upon at random - Harold Smart had his throat cut (also in Cardiff), and Fred Longman, a dock labourer was stabbed to death in Barry.

Compare this with the hundreds of blacks killed in mob violence in the USA in the same year.

This is off topic but when you think the left can't sink any lower, read this:

If the story I posted is accurate I guess Catholic parishes will no longer we able to sponsor Scout troups,

Catholic parishes all over the country continue to sponsor Scout troops. In the present moment, many bishops have reaffirmed their support for Scouting and have encouraged parishes in their dioceses that sponsor troops to continue doing so.

The story appears to be accurate but it also seems that the policy is not new by any means:

If your silly statement is true, then these bishops are apostates and have ZERO credibility, just like you Kavanaugh. As a Catholic parent I would never allow my son to participate in an organization which is now clearly aligned with the forces of evil

If you're looking for adventure of a new and different kind,
And you come across a Girl Scout who is similarly inclined,
Don't be nervous, don't be flustered, don't be scared -
Be prepared!

Returning to the original thread, the anonymous commentator who posted first has yet to give a clue as to his identity. He appears to be a humourless individual who has a grudge against Fr Hunwicke (he has posted before). He also has a cavalier disregard for the proper use of historical evidence.

Perhaps he is a former pupil who was a duffer at Latin and Greek and incurred his master's excoriation, which still rankles. Who knows?

At least he ought to know that Latimer and Ridley were not burned for being negroes. And he might well benefit from taking the good Father's advice and refrain from reading his blog until he has taken an intensive course in English humorous literature.

Come out, come out, whoever you are!