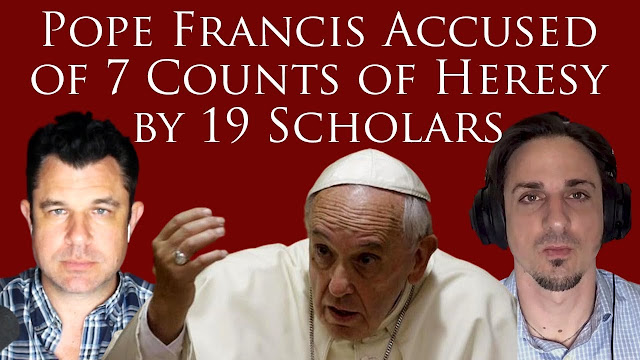 The problem that Pope Francis has is His Holiness confusing remarks, his denigration of orthodox Catholics, and eyebrow raising of the dualism between truth (doctrine) and the Lord.

Thus many Catholics actually think that perhaps the pope isn’t Catholic and believe that Pope Francis said what an aging atheist said he said. That’s the problem and it is of the pope’s making not Scalfari!

At the end of today's #SinodoAmazonico #AmazonSynod Presser; Paolo Ruffini says "the Holy Father never said what Scalfari writes”, in reference to an article by Scalfari which claimed Pope Francis said "Jesus of Nazareth ... was man of exceptional virtue, not at all a God."

Nobody in his right mind believed that Pope Francis had denied Jesus Christ's divinity.

"Many signs, many miracles that the Apostles performed were indeed a manifestation of the divinity of Jesus."

Francis denies the divinity of Christ every time he declines to genuflect during the mass or before Our Lord in the monstrance.

Here's the problem Mark, claiming that Christ became divine because of/or during/or after the crucifixion is HERESY.

It would be real simple to either actually refute what this friend/reporter is saying, or STOP talking to him about anything other than the weather.

As I read on a different blog, if a wife went to her husband and said "dear, your friend Tom the reporter is printing all these allegations that you've been telling him about an affair you're having, what's up with that?"

And the husband just replied something like the Vatican does and, and say "honey Tom doesnt tape our conversations so you cant expect him to have the exact wording you know..."

I'd say that isnt much of a denial!

You are dealing with a dim bulb. I recommend you give up trying

The problem, gentlemen, is not the point of Faith in the Divinity of Christ but that it is plausible that the Pope denied it. What is scandalous is that such a statement from someone, no matter how old and demented, isn’t laughable and absurd.

rcg - you are correct, and Mark Thomas would call ALL of those people who consider this possibility 'right wingers' or 'rad-trads' without ever considering the possiblity that what these people are feeling IS a problem.

The fact that it could even be possible for the pope to deny such a teaching well....

Speaking of heresy---or a move to encourage it---that has nothing to do with the controversy over the pope's words, Robert Francis O'Rourke (some may know him as "Beto") was quoted as saying that he would strip churches of their tax exemption if they did not support same-sex "marriage" And this guy supposedly was raised Catholic? Wonder if he still is? If so, maybe it is time for him to be denied the sacraments. I am not a fan of Trump and his inflammatory rhetoric, but what other choice is there next year when the Democrats are running as the atheist party? A party where there are few absolutes, where "right and wrong" is subjective? If Robert Francis O'Rourke, not so sweet Nancy Pelosi or "Sleepy Joe" showed up at my parish for Mass and I were pastor, I would have to direct them away at communion, telling them they must repent of their erroneous views on abortion and same-sex marriage before they can receive the body and blood of our Lord.