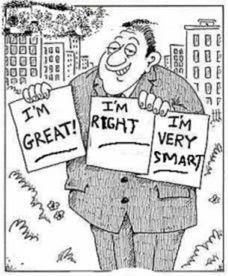 The problem with worship is also its strength. It is very personal and we all have our personal preferences, many of which are built upon our fallen nature, the sin of pride. So what is a Catholic to do with his pride? He should acknowledge it as sin, repent, confess, do penance and go and sin no more.

For example, some have commented that they don't like being distracted by singing, or should I say, chanting, during Holy Communion, yet the GIRM of 2002 states that the Communion Chant begins while the priest is receiving the Sacrament. How does one square their personal preference for the law of the liturgy in the Ordinary Form?

So let's review what the law is and in humble obedience which means setting aside one's pride, should we not follow it?

The pertinent GIRM requirements for the Holy Sacrifice of the Mass at Holy Communion, the Sacred Meal and Sacred Procession:


159. The Communion chant begins while the priest is receiving the Sacrament (cf. no. 86).

160. The priest then takes the paten or ciborium and goes to the communicants, who, as a rule, approach in a procession.

The faithful are not permitted to take the consecrated bread or the sacred chalice by themselves and, still less, to hand them from one to another. The norm for reception of Holy Communion in the dioceses of the United States is standing. Communicants should not be denied Holy Communion because they kneel. Rather, such instances should be addressed pastorally, by providing the faithful with proper catechesis on the reasons for this norm.

When receiving Holy Communion, the communicant bows his or her head before the Sacrament as a gesture of reverence and receives the Body of the Lord from the minister. The consecrated host may be received either on the tongue or in the hand, at the discretion of each communicant. When Holy Communion is received under both kinds, the sign of reverence is also made before receiving the Precious Blood.

If, however, Communion is given under both kinds, the rite prescribed in nos. 284-287 is followed.

162. The priest may be assisted in the distribution of Communion by other priests who happen to be present. If such priests are not present and there is a very large number of communicants, the priest may call upon extraordinary ministers to assist him, i.e., duly instituted acolytes or even other faithful who have been deputed for this purpose.[97] In case of necessity, the priest may depute suitable faithful for this single occasion.[98]

These ministers should not approach the altar before the priest has received Communion, and they are always to receive from the hands of the priest celebrant the vessel containing either species of the Most Holy Eucharist for distribution to the faithful.
Posted by Fr. Allan J. McDonald at Wednesday, July 18, 2012

Go and check the revised version of the GIRM, which removed that part that says, "Rather, such instances should be addressed pastorally, by providing the faithful with proper catechesis on the reasons for this norm," regarding Holy Communion.

That exists no more and if a person wishes to kneel, he must be allowed to do so, without a word from the celebrant. =p Just a technicality!

I still see no reason for all the EMHC's at St. Jo's. The designation should be changed to IMHC"s...Inordinate Ministers of Holy Communion. There is no reason in the world why the Priest and a Deacon could not distribute to everyone in a reasonable amount of time at any regular Mass at St. Jo's. The exceptions being a couple of the Christmas and Easter Masses. Seriously, there are usually eight EMHC's at 5 pm Mass where the Church is half empty at times. I think you just don't want to address it because of upsetting some of these people whose faith must hinge completely upon their tramping down the aisle every Sunday and pawing over the Elements. It must be some kind of power trip or something. While I understand your reluctance, I wish you would reconsider...

"For example, some have commented that they don't like being distracted by singing, or should I say, chanting, during Holy Communion"

No, you should not say "chanting" if what you mean is "singing". Non-sacred singing by the people is terribly distracting, whereas sacred chant by the choir lifts the spirit.

"Rather, such instances should be addressed pastorally, by providing the faithful with proper catechesis on the reasons for this norm."

You really ought to get copy of the final official version of the GIRM. Spurious litur-geist (think polter-geist) statements like this in the temporary provisional GIRM translation have been deleted. In any event, the word "pastorally" in this obsolete statement is ironic, since the standing norm, whatever its motivation, has manifestly been a pastoral disaster.

At my Dad's church up in Massachusetts I was told it is permissable for a communicant to receive the host in his hand the proceed to the EMHC who is presentling the sacred blood and "dip" his host in if he wants to receive under both species. I mention to my Dad, who is an EMHC, that I thought this was totally out of line and he said that his pastor had ok'd it. Am I right or wrong?

Tom I hope is well! But, no only the minister of Holy Comminion may intinct or dip the Host not the communicant.

Where does the GIRM say the congregation is to join in singing during Communion?

All it says, according to what you've quoted, is that the Communion verse is chanted (and that is typically done by the schola/choir).

The chanting of the Communion verse is not distracting, it is part of the Mass Propers. Vernacular hymns sung by the congregation are distracting.

Redemptionis Sacramentum [94.] It is not licit for the faithful "to take ... by themselves ... and, still less, to hand ... from one to another" the sacred host or the sacred chalice. Moreover, in this regard, the abuse is to be set aside whereby spouses administer Holy Communion to each other at a Nuptial Mass.

So is it wrong of me to sing the hymn while waitng to process up for Holy Communion?

I regard it as a form of prayer for me that guides and helps orient my mind toward the Eucharist.

Or is the laity supposed to consider the hymn as 'background music?

"I regard it as a form of prayer for me that guides and helps orient my mind toward the Eucharist."

Perhaps if it's Panis Angelicus or Ave Verum Corpus or O Salutaris Hostia, but in lieu of the typical borderline-heretical vernacular communion ditties, wouldn't it be better to say the Act of Contrition or the Confiteor?

I agree with Gene that EMHC's are not needed at St. Joseph. Some of them are out of control. My husband felt forced to receive standing and in the hand last week because the EMHC made it very clear by her body language that she didn't want to distribute the host in any other way. In fact, he asked me to say something to Father about it because it was so blatent. My husband is one of those 90%, middle of the road Catholics so that's really saying something.

"...wouldn't it be better to say the Act of Contrition or the Confiteor?"

Hadn't thought of that, especially since we don't say the Confiteor during Mass - maybe I'll try that this Sunday :-). What a great suggestion! Thank you Mr. Edwards.

I think if I hear "Gift of Finest Wheat" one more time during Communion, I might go insane.

I don't think I have ever once sung during Communion - it just never seemed like an appropriate thing to do. Prior to receiving, it's the Confiteor or Act of Contrition and after receiving, it's extemporaneous thanksgiving. If not receiving, it's a spiritual communion. None of that involves singing.

But, you know, everyone is different. Since there is vernacular singing at St. Joseph, I don't see why you shouldn't sing if that's what you think you should do.

I agree with everyone else on the over-use of EMHCs. Not only that, but the way they are used is strange - with their metallic, mini-stoles marching up during the Procession (is that allowed under GIRM 47 since they are not "ministers"?) and then scattering and then coming back. It's all just way too much. We have two priests and two deacons, we can handle Communion without EMHCs.

Marc, I do not sing during Communion and find it annoying. The EMHC's...I swear with those stoles it looks like a Star Trek set...

If singing is a form of praying for a person, it's better than the people watching and fashion examination that most do....you present company excluded, obviously. ;-)

Yet, an Act of Contirition is never a bad idea!

Waiiiiit there are EMs wearing STOLES? That seems blatantly wrong, just blatantly wrong. The stole is a status symbol, a symbol of rank. They are not bishops, priests or deacons.

Wearing an alb? That's fine I guess. I hate "vested" EMs any way they come, but the stole just seems wrong to me. How about they just start wearing mitres?

Not stoles but choir collars !

I know, right? How dare we bother to study Church doctrine, theology, history, and liturgics and then discuss those subjects on a Blog where the blogger has opened up for public comment posts about those very subjects!

I am such a terrible person for bothering to read a book from time to time...

Hey, Anonymous, Does the cartoon remind you of yourself any, since you are smart enough to scoff at the rest of us? BTW, has your Mama made your bed yet today?

The use and propagation of congregational hymn singing during Communion is by direction of the USCCB. This was published in their most recent document "Sing to the Lord: Music in Divine Worship"does (2007), and was their first document on litugical music published since 1983. As a professional church musician, I am of the opinion hymn singing plays an important function, but should not be a part of the Communion experience. With those concerned about the laity's "active participation," obviously the laity are involved in their most important activity. Personally, the opportunity to play/improvise music (usually based upon a proper chant) at this time is the second greatest spiritual occurrence I experience within Holy Mass. With this perpetuation of hymn singing, I feel the bishops have missed the mark.