IF UNITED METHODISTS CAN DO IT, YOU'D THINK UNITED CATHOLICS COULD TOO!

The video below and the pictures are Wesley United Methodist Church's new sanctuary in Evans, Georgia, a booming suburb of Augusta. This is their new $5 million church: 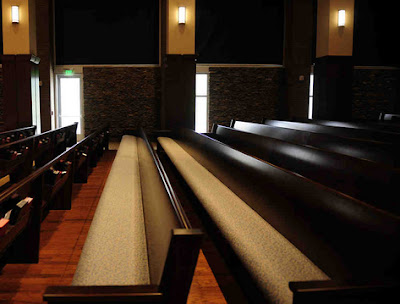 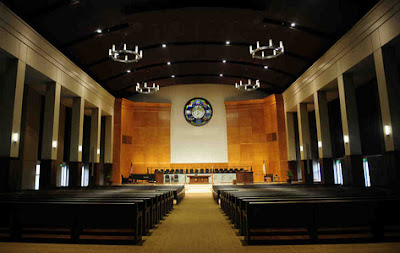 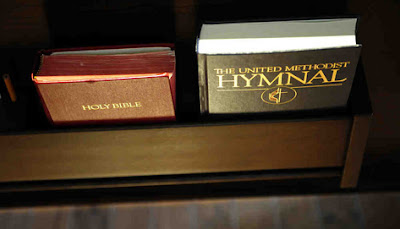 For the most part, Methodist Churches in the North Georgia District tend to build churches that look more like Southern Baptist Churches rather than high Episcopal. Usually the choir is dead center, with a large pulpit, dead center on the "stage" and then on the nave level, directly below the pulpit and up against the stage is a Protestant "Communion Table" with a plain brass cross and two brass candlesticks. Wesley United Methodist Church seems to have been influenced by the liturgical renewal of the Second Vatican Council which did indeed influence many Protestants, in particular the Protestant Episcopal Church in this country. After Vatican II the redesign of the Book of Common Prayer relied heavily upon Catholic liturgical principles in the post Vatican II renewal period. I do not know what this particular Methodist Church's worship looks like. Typically Methodists only have "Holy Communion" once a month, normally the first Sunday. Their liturgy in their hymnal has a format similar to the Catholic Church, but in the south is seldom followed word by word or order by order. It is normally more Baptist looking in expression and ministers may or may not wear robes. Liturgical vestments are extremely rare except for the altar servers who do wear cassock and surplice, oddly enough and the choir members typically wear choir robes. But I draw your attention to the video above and the photos. I believe this is quite a beautiful building both interior and exterior and could easily be adapted for Catholic use. It looks very Catholic doesn't it? It's central altar, more rectangular than box like and small, would work well as a Catholic altar, either facing the people or ad orentem. Add a nice size crucifix to the back wall, some nice statues or icons and it would be stunning. Of course add a choir loft at the back of the Church would be easy to do. But notice too that the United Methodist have a national hymnal. I don't think the Methodist Church allows for competition in having a variety of hymnals. What in the name of God is the Vatican thinking in not mandating that the various language groups have a national hymnal with what should be known by every Catholic in the world in terms of Latin texts and what the Vatican scrupulously approves for vernacular hymns? The money making machine of capitalism we have today with different publishing houses publishing different throw away hymnals and hard back hymnals with composers making money composing new music for new hymnals every few years is a scandal to the nth degree in the Catholic Church. We can learn a great deal from our Protestant brothers and sisters in putting an end to this silliness! The reason why Protestants have robust congregational singing is because they have a national hymnal and they learn what is in it and sing it regularly and don't change it or add new music to it. IT DOES NOT TAKE A ROCKET SCIENTIST OR A LITURGIST TO FIGURE THIS OUT FOLKS!!!! IF CATHOLICS CAN'T SING, BLAME THE VARIOUS PUBLISHING HOUSES FOR CATHOLIC MUSIC AND BISHOPS WHO HAVE FAILED IN MANDATING A NATIONAL CATHOLIC HYMNAL IN THE VERNACULAR (ALTHOUGH I FEAR WHAT WOULD BE IN IT IF THERE A CERTAIN CONSERVATIVE MUSIC ORGANIZATION IN THIS COUNTRY DOESN'T DECIDE WHAT SHOULD BE IN IT AND IF CATHOLIC OREGON PRESS GETS ITS WAY!) In the video, you will note very briefly that this new Methodist Church has quite a lovely altar railing! Yes, and altar railing. Typically Methodists, when they have Holy Communion once a month, kneel for Holy Communion. They don't normally have kneelers on their padded pews but Methodists will go and kneel at the altar railing for private devotions. Why in the name of God and all that is holy are modern liturgists so phobic about kneeling and having altar railings and kneeling for Holy Communion. It is truly astounding and the lame excuse that standing was the norm in home churches and ancient basilicas is, well, just lame! If the Methodists can build this, have altar railings and a national hymnal, you'd think Roman Catholics could too!
Posted by Fr. Allan J. McDonald at Monday, July 23, 2012

I am actually quite pleasantly surprised with this building. I must say, I like it very, very much.

There would have to be some cosmetic additions like statuary, iconography and painting. That awful choir seating in the apse would also have to be ripped out and shoved upstairs into a loft. But other than the choir seating I cannot think of anything currently present that I would change. Just some additions.

I think what makes this such a good rendition of modern is the fact that it relies quite heavily on traditional forms. The colonnades and side aisles are wonderful. The semi-vaulted ceiling is also great--I say semi-vaulted because the curve is rather low. Something that I think is rather genius is the apse area. They have essentially "created" an apse.

If you notice, the back wall is flat. This is of course not particularly traditional in Catholic architecture, as almost all respectable basilican (which is what this is) or cruciform plan Catholic churches have at least a small convex apse. However, what they have done with the wooden structures is they have essentially made an artificial apse. The structures are curved. Perhaps I would have curved them more severely, but you get my point. This is, in my opinion, a great way for a church to create an apse without having to spend more money on more masonry.

I think the least pleasing element is the altar. I do not like it. It is rather too small for the area. Also, it would be much better in marble. However most all Catholic churches have marble altars. With a slightly (25%ish) bigger altar and, more importantly, a ciborium magnum over it, the sanctuary would be absolutely perfect. I think a ciborium would be absolutely spectacular in this space.

1. Choir loft
2. Bigger, marble altar WITH ciborium magnum a MUST
3. Perhaps an elevated pulpit in a marble to complement the altar and ciborium

Overall, this is an excellent attempt at modern, in my opinion. I am pleasantly surprised.

Wonder if the Vatican is watching the NCAA presser tto see what oversight looks like. Reckless disregard for the welfare of children....more concern for the organization. Hope you get the hymnal, altar rail, music, and orientation you think so essential. Your blog that communicated that the Mass is over when the priest consumes was incredible. Distribution of communion to the people is not an essential part. That mindset brought us years of abuse. Even if that is a liturgical truth I'd keep it to myself.

Your interpretation of sexual abuse and posts I have written on the liturgy are incredibly ignorant.

Your take on sexual abuse, liturgy, "the organization" and whatever else peeves you indicates a lack of awareness that would qualify you for Special Ed. You apparently don't have a clue about what caused abuse or what Fr. M should keep to himself.

Please go troll some other site. You're out of your element here.

It becomes depressing to see various protestant churches and services which put to shame some of the local parishes.

I understand the role of the local libbers in all this, staffing, as they do, the committees, ministries, and RelEd dept, but what of the bishop?

k kids, let's get back on topic. This building.

Actually, the topic presented was if the Methodists can do it, you'd think we could too!

Ultimately, we can do it. But with many parishes dominated by Spirit of Vatican II--change the liturgy, change the world--folks, there are hurdles.

It would be a good beginning to get the Tabernacle back to its rightful place, and to introduce a prie-dieu, at the least, to accommodate those of us who wish to kneel to receive. If there is sufficient use of the prie-dieu, making the case for a communion rail becomes easier.

There is an ongoing discussion going on about GIRM 48 and the approval of Catholic hymnals at the Musica Sacra forum. The GIRM is quite clear about the issue, that a hymnal must be approved either by the local diocesan bishop, or by the national Bishop's conference. In Canada, the conference has approved a national Catholic hymnal.
In USA, however, the USCCB claims that what they are doing (allowing competition) is their way of interpreting GIRM, and that the Vatican supports them. Go figure....