WHETHER YOU LIKE IT OR NOT, IF IT IS IN THE RUBRICS, SAY THE BLACK AND DO THE RED?

The big difference between the photo below and what follows is that this is what is prescribed for an EF's Pontifical Solemn Sung Mass in its highest form whereas the next entry is purely idiosyncratic on the part of the praticipants at this "Clown Mass" and very much an extreme but typical expression of post-Vatican II "spirit of things" which is not to be found in the Extraordinary Form of the Mass or in Pre-Vatican II praxis: 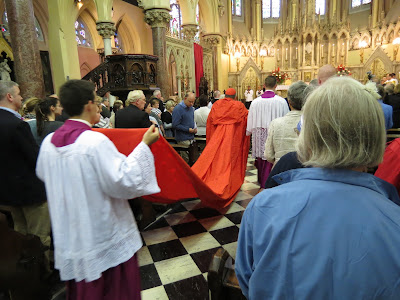 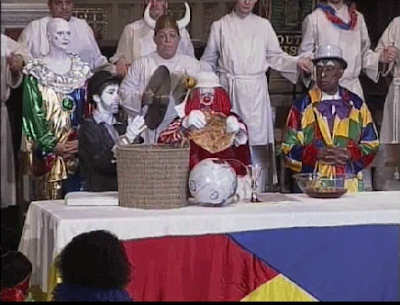 Some people who hate the pre-Vatican II Church and their Roman Catholic patrimony and heritage absolutely go apoplectic when they see a prelate wear the Cappa Magna. They compare it to the clown Masses that were and are common in some places in the post-Vatican II era.

But there is a difference. Clown Masses have no rubrics to them mandating or even permitting a priest or bishop to wear the garment of a clown or his facial make-up. This is an idiosyncratic quirk of the personality of the priest donning the clown outfit. Not so for the prelate wearing the Cappa Magna in the Extraordinary Form of the Pontifical Solemn Sung Mass. It is in the rubrics for the preludal procession prior to being vested in all the accoutrements of the high priest.

Recently Cardinal Raymond Burke who often wears the Cappa Magna when celebrating the EF's Pontifical Solemn Sung Mass made some excellent suggestions for the reform of the reform of the Ordinary Form of the Mass by bringing back the Prayers at the Foot of the Altar, the EF's Offertory Prayers and the Last Gospel, but he also recently offered some sober words about priests tinkering with the rites of the Mass:

In a wide-ranging interview, Cardinal Burke also outlined the reasons why a priest should not ad-lib his own words or prayers during Mass, since he “is the servant of the rite” and “not the protagonist – Christ is.”

He also noted with approval how the 1917 Code of Canon Law – since superseded by a new code promulgated in 1983 – explicitly stated that a priest should “accurately and devoutly observe the rubrics of his liturgical books to beware lest he add other ceremonies or prayers according to his own judgment.”

“What kind of thinking is it on our part for me to think that I can improve on the liturgy that has been handed on in the Church down the centuries? This is absurd,” Cardinal Burke stated.

My final Comments: As recently as a couple of years ago some of our deacons were complaining that a Jesuit priest who came to teach them during their formation would often ad lib the parts of the Mass because he felt his version of the Mass was better than what was written in the Missal. This was prior to the new English translation.

I was formed in the 1970's in the same school of thought that encouraged priests to ad lib here and there and for about the first six years of my priesthood I did precisely that--more so at "informal Masses" [These were common in the 80's especially at "home Masses"] and less so at Sunday or daily Mass, but ad lib I did! I stopped once Bishop Raymond Lessard placed his thumb on me when word of my ad libbing after I got assigned to the Cathedral reached the holy ears of the high priest of the diocese. But I digress, God bless those holy snitches.

But I have been faithful to a fault since that time, so don't condemn me for 6 years of rather nice ad libbing when I've been a paragon of virtue for 26 years since. I've repented, I've moved on and you should too.

1. At our Saint Joseph Feast Day Mass with Schubert's Mass, I celebrated the Ordinary Form of the Mass entire Ad Orientem with the Roman Missal on the Epistle Side of the Altar for the Collect and then transferred to the Gospel Side during the Gospel Acclamation, although the Liturgy of the Word was at the Ambo as is normal for the OF Mass. I also celebrated the normal Penitential Act beginning at the foot of the altar and then moving up to the altar as the Kyrie was sung--I did nothing different word-wise, but added that movement--should I be reprimanded? Oh, I also kissed the altar each time I turned from it to the congregation as in the EF and I added the double genuflections at the Consecration and one after the Great Amen! So if I was wrong in doing so, count this as an earnest repentant confession.

2. Twice now at a reform of the reform of the Ordinary Form of the Mass, I have celebrated as a prelude to the Ordinary Form of the Mass, the Extraordinary Form's Rite of Sprinkling Holy Water. I've justified doing this as it is, even in the Extraordinary Form, a prelude to the Mass and optional, but clearly not a part of the Mass and even the vesture is different-cope for the priest. Would that be a case of mixing rites and thus I should be censured? Keep in mind no one blinks an eye at a children's prelude pageant at Christmas Eve Masses or a choral prelude and even Cardinal Wuerl after the Processional hymn concluding the Fortnight of Prayer had everyone sit down prior to the Sign of the Cross and had a 25 minute pep rally and introduced all the celebrities at the Mass and a couple of them offered remarks!

3. Finally at three of our Sunday Masses, I am offering the option of Intinction and at all of our Masses now the "Minister" who distributes the host stands behind a stable kneeler allowing those who should choose to do so to kneel for Holy Communion. I make clear that "standing is the norm, kneeling is the exception, both are allowed and the choice is yours!" Is this an innovation and an ad lib and should I be censured for it?

Apart from these innovation, I am pretty much a say the black and do the red sort of person. Your thoughts on my innovations!
Posted by Fr. Allan J. McDonald at Wednesday, July 11, 2012

Apoplectic? No. This is just more of your pointless point-making hyperbole, Good Father.

It strikes many as odd that a servant would wear the regalia of a medieval potentate.

I think the movements and gestures are technically problematic, although I wish they were not. If I understand correctly, whenever the rubrics leave a question unanswered, we may refer to the traditional Roman practice. But I don't think that works in these cases. If it does, however, I would certainly be happy.

On 1): Is there anything in the Rubrics for the OF that specifically preclude you doing so? In my mind that is the question that needs be asked.

On 2): Same as 1), is there anything in the OF Rubrics that preclude you from doing so, and if so, why did they not preclude the other incidents you mention?

On 3): I think this is just silly. Of course this is permitted, who could argue otherwise?

To sort this cappa magna business out, this must be said:

For a prelate to wear the cappa in the context of EF celebrations is a humble act of deference to the Church's liturgical requirements.

For a prelate to wear the cappa in the context of a "most solemn" OF celebration is also a humble act of deference to the Church's liturgical requirements.

Our new pastor celebrated his first mass in our parish last Sunday. He ad-libbed some stuff and it left me pretty upset.

The Vatican has told priests how to celebrate the Mass and they should do it that way.

2 and 3 are fine - in the case of 2 the London Oratory have been doing it for decades. Even if the Asperges precedes Mass, it has been permitted to wear the chasuble since 1967.

At the OF Solemn Mass at the Oratory during the Credo most of the congregation make a point of kneeling at the Et incarnatus. I don't; I make a profound bow because the rubrics specify this. However, I make a slight bow at simul adoratur and cross myself at Et vitam venturi saeculi - there is nothing in the rubric to say I shouldn't, and it is traditional to the Roman Rite.

I have already put Ignotus right about the Cappa. It does indeed symbolize worldly pomp but he is divested of it before Mass, symbolically relinquishing the vanities of this world before donning the vestments of a subdeacon, deacon and priest.