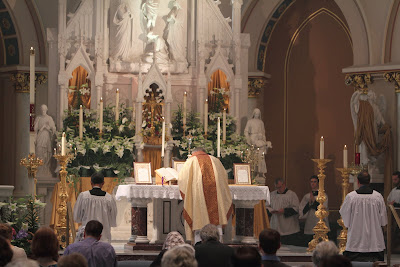 PRESS HERE FOR THE REFORM OF THE REFORM AND POPE BENEDICT'S VISION OF THE MASS
Posted by Fr. Allan J. McDonald at Friday, August 12, 2011

The placing of the Cross in the center of the altar (as well as the six,or seven, candles) is an excellent strategy to start bringing the external elements of the Mass more in line with the interior orientation we are all supposed to have at Mass.

However, it is only a way to begin what may be a long process of transition (a quiet catechesis, of sorts) back to the ultimate external orientation--ad orientem (or versus apsidem--depending on how your church is situated geographically). This is consistent with an article I once read about Pope Benedict XVI quietly "telegraphing" his ideas and attitudes by his actions and by his use of more traditional liturgical externals (and more traditional clerical dress, such as the ermine trimmed mozetta and half over-sleeved cassocks)

This explains his limited use of ad orientem in the Sistine Chapel, etc. Even he knows it will take a long process of catechesis and slow introduction. The Cross on the altar (in a Mass facing the people) is the beginning, not the end.