ARE THE METHODISTS ONTO SOMETHING: RETRACTABLE ALTAR RAILING!

Trinity on the Hill United Methodist Church in Augusta, Georgia recently underwent a $7 million dollar renovation of their sanctuary. They belong to the North Georgia Conference (diocese) of the United Methodist Church and their form of worship is decidedly more Baptist or low church than Anglican (from whence they evolved)or high church. Macon's Methodist churches are in the South Georgia Conference and are more high church in worship style and sanctuary design with a main "altar" table and the pulpit to the side with a lectern for the Scriptures. These churches could pass for Episcopalian whereas the Augusta ones could pass for Baptist.

However, most Methodist Churches, high or low still incorporate the altar railing for personal prayer and sometimes for receiving Holy Communion. Trinity on the Hill in Augusta also televises its Sunday morning service. They celebrate holy communion only once a month. I happen to watch it one Sunday morning and their young curate who was the main minister that day told the congregation at communion time that anyone could come forward to receive holy communion whether or not you were Methodist and whether or not you were even baptized!

But I digress, the heading for this post is retractable altar railings. Trinity on the Hill is consecrating its "renewed" sanctuary this morning. One of the more unusual aspects of its new design is that it still incorporates a rather traditional altar railing although the new design follows "non-denominational churches" worship design allowing for an auditorium appearance for services that are rock concert like.

The altar railing would be the envy of most traditionally minded Catholics although it also has a very unusual ability: IT IS RETRACTABLE! Can you imagine new Catholic Churches with a RETRACTABLE ALTAR RAILING? When it is up, it's got to be the EF Mass coming your way! If it is down, it's the OF Mass.

Why didn't the Catholic Church think of that? Leave it to the Methodists! I wonder if this congregation feels separated from the stage because of that nasty altar railing? No problem, it retracts for those who feel separation anxiety! 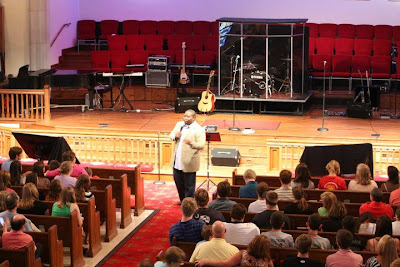 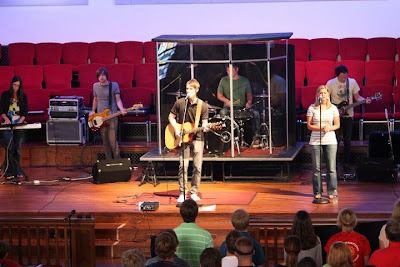 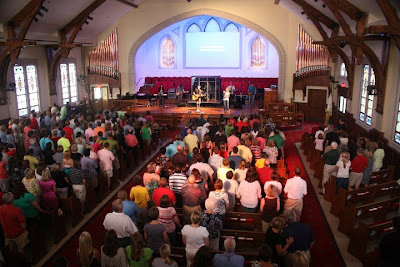 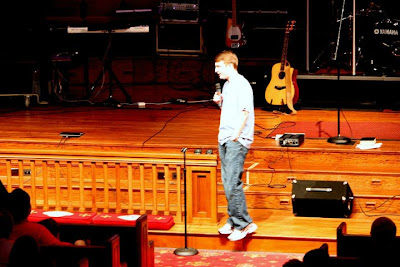 Maybe in the Krystal Kathedral. Instead on kneelers they can have sliders. The rail would always be there but am automated picture would show either of Popes John XXIII or Paul VI so the folks would know whether to kneel or not. Then they would use their retractible tongues to receive the host.

LOL, I think Pin covered all that needs be said.

I remembered that church after I recognised the glass box with the drummer in it. They filled it with sand and he crawled out while holding his breath. The Pentecostals have one like it but they fill it with snakes.

RCG, you seem to know a lot about this stuff...

If it were a Catholic Church it would be obvious, the guy in the glass cage would have asked for Communion kneeling, or Latin in an OF Mass.

Yep. Playing banjo makes snakes run away since they can't put their hands over their ears.

RCG, snakes do not have ears, at least not external ones. Their tongue picks up particles and vibrations from the air and ground and places them in the Jacobson's organ in their mouth. These are processed by a complex series of neurons which encompass taste, smell, and "hearing. They also pick up vibrations from the ground through sort of "lateral lines," not unlike a fish. Snakes probably do not appreciate banjo music in the samw wat that you do. They don't like accordians, either, I'm told.