YIKES: IS THIS LITURGIST ONTO SOMETHING?

"The Old Liberals talk all the day long about ecumenism, dialog and Shangri la. At the same time they swing a mallet against Catholics." 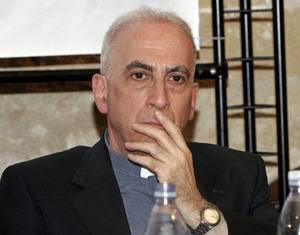 (kreuz.net) The Old Mass is experiencing a crescendo.

This is what the Italian Liturgist, Prelate Nicola Bux, said in an interview on 3. August for the website 'papalepapale.com'.

The Motu Proprio 'Summorum Pontificum' has opened a breach.

The Celebration Facing the People Stems From the Last Century

The idea that the Priest faced the people in the first centuries is "completely false".

The Old Mass is visited throughout the world, especially by the young, remarked the Prelate.

The youth have found in the Old Mass the Mystery of Faith.

Prelate Bux says the return to the Old Rite is "in no way second rank" for the faithful.

The Mass of All Ages promotes an encounter with God.

The Society of Pius X has already Experienced it: These Bishops Won't Obey

The Prelate said that the Bishops were encouraged to accommodate the faithful in their requests for the Old Mass with the instruction of 'Universae Ecclesiae'.

It is no secret that "some" -- in reality it is many -- Bishops do not value the Motu Prorio and oppose it "with all means".

These Bishops conduct themselves "like rebels against the Pope".

Top shepherds, who refuse to obey the Pope, should not expect it from their priests and faithful either.

The Ecumenists Cut Catholics Out

The withdrawal of the Excommunications of the four Society of Pius X Bishops in January of 2009 is hailed by Prelate Bux as a "gesture of great love".

The Church promotes dialog even with Jews and Heathens.

All the more must we strive to unite ourselves with those who share the Catholic Faith.

Prelate Bux sees a drama in the Church especially with the intransigence [and lack of nuance, we might suppose] especially as regards the Ecumenists.

I couldn't agree more, especially on this score:

"Top shepherds, who refuse to obey the Pope, should not expect it from their priests and faithful either."

Fr. McDonald,
Thanks for finding a translated version of this originally German article. I have been following Msgr. Bux for a while now on other blogs. If only more bishops (especially American ones!) would pay attention to the writings and interviews of this liturgist . . .