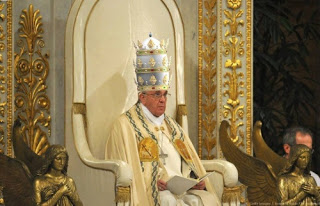 Pope Benedict wanted to propose to the bishops of the world his agenda of reform in continuity with the pre-Vatican II Church to show there was no rupture in Scripture and Tradition especially as it regards the Liturgy, the priesthood and religious life.

Pope Benedict was not authoritarian unlike Pope Francis while promoting "decentralization" in the Church interferes directly in other dioceses, religious orders, the Knights of Malta, the lives of Cardinals, priests in Nigeria and even calls parishioners of other dioceses and tells them to go to Holy Communion.

This, God willing,  will embolden a  more traditional minded pope in the future to be as authoritarian as Pope Francis when it comes to mandating the EF Mass where it is requested; the reform of the Ordinary Form Mass as Pope Benedict and Cardinal Sarah propose, a return to traditional forms of Religious Life to include the mandating of the habit and intervening in the lives of priests like the Jesuit from America Magazine who is promoting a heterodox sexual morality or should I write "homodox" that is at odds with the teachings of Christ?

Time will tell, but Pope Francis seems to be paving the way for popes to flex more muscles and be less willing to simply propose ideas!

VATICAN CITY (AP) -- Pope Francis is once again flexing his papal muscle by seeking to keep tabs on his cardinals who live in Rome.

Francis asked the head of the College of Cardinals to remind his fellow Rome-based princes that they must inform him when they leave town and where they're going.

It wasn't known if there was a particular cardinal whose activities irked the pope, but some of his more conservative critics have delivered speeches and lectures abroad that have questioned Francis' pastoral line, particularly concerning his divisive opening to letting civilly remarried Catholics receive the Sacraments.

Cardinal Angelo Sodano reminded his confreres in a May 31 letter that there is a "noble tradition" of cardinals informing the pope of their whereabouts. He asked that they revive it, particularly when away from Rome for long periods.

Asked Wednesday about the letter, Vatican spokesman Greg Burke said merely that it was a good and "long-standing tradition."

Francis' request comes on the heels of an extraordinary display of papal power last week, when he ordered all the priests of the Nigerian diocese of Ahiara to write him a letter within 30 days pledging their obedience. Failure to do so, he warned, would result in suspension.

The ultimatum stemmed from the refusal of Ahiara's priests to accept the 2012 appointment of a new bishop.

The most striking display of Francis' papal power came late last year, when he took over the Knights of Malta lay religious order. Francis intervened in the sovereign order during a governance crisis, forcing the ouster of its leader and naming a top Vatican official to help oversee the election of a new top knight and the revision of the knights' constitutions.

Francis has prided himself on the broad consultation and discernment process he engages in before making decisions that is typical of a Jesuit superior. But like any good Jesuit, he is also decisive and knows how to wield his authority.

In one of his earliest interviews as pope, he acknowledged that he ran into trouble when he was a young Jesuit superior in Argentina, where "my authoritarian and quick manner of making decisions led me to have serious problems and to be accused of being ultraconservative."

Ironically, Francis' latest display of papal muscle comes as he and his cardinal advisers wrapped up another round of consultations about decentralizing authority from the Holy See to local churches. According to a Vatican statement Wednesday, the three-day consultation touched on allowing local bishops' conferences to make decisions about ordaining permanent deacons as priests.
Posted by Fr. Allan J. McDonald at Thursday, June 15, 2017

"This, God willing, will embolden a more traditional minded pope in the future..."

Father......seriously!??? Do you really believe that. Come on. Please.

Look at the college of cardinals that elected Francis. All of them appointed by John Paul or Benedict. Kasper, Daneels, Marx, Dolan, Tagle, Wuerl and the list goes on and on and on. Clearly that bunch was not the brightest and the best or orthodox.

Look at the college today. Every single Cardinal, EVERY SINGLE ONE appointed by Francis is a radical leftist like himself. Game over. There isn't going to be a "traditionally minded pope" elected again. Liberals unlike conservatives NEVER give up. Benedict and John Paul appointed men they KNEW were heterodox. The superior of the Jesuits made a special effort to meet with Pope John Paul and begged, literally begged him not to make Bergoglio a bishop because he was a sociopath. And what did John Paul do. The entire Church is suffering because of one bad decision by a Pope who was a rotten administrator.

The next pope will be beyond imaginingly worse than Francis. My crystal ball tells me that the next one will make Francis look like Pius XII.

Father you have a right to your opinion. This is your blog. But it is frustrating to see that you are not realistic about just how dire the situation is under Francis. When he allows or demands that gay unions receive an official church sanctioned "blessing ceremony" are you going to do it? Are you going to rationalize that he is pope and I'm Catholic so I have to follow whatever he says without question. Or are you going to pick up the cross and follow Christ and the real teachings of the Church. Not these invented things that Francis dishes out on a daily basis.

Given that everyday more bishops' conferences seem to be adopting a morally heretical interpretation of Amoris Laetitia, it is very likely that there will be a recognized schism before or during the next papal conclave.

I think it is very likely that the Church of the future will have to determine that Francis was an antipope in order to undo his problematic writings, especially AL. That'll probably be based on the suspicions regarding Pope Benedict's resignation. It's unlikely to be sorted out in our lifetimes, but it'll have to be sorted out eventually, if the Church wishes to continue to maintain that it is in possession of the fullness of Truth. Of course, few of the current bishops seem to care about that since they are content to substitute their political motivations for the teachings of our Blessed Lord.

As always, we are wholly reliant on Divine Providence.

Could you be a LITTLE more unconvicted here?

I don't have a crystal ball! Also, I'm an attorney, so I'm trained not to make definitive statements. Allegedly.

"Since the death of [Pope] St. Pius X the Church has been directed by weak and liberal popes, who have flooded the hierarchy with unworthy and stupid men.

"This present conciliar set-up makes this all the more apparent."

For those unfamiliar with Monsignor Fenton...from Wikipedia:

Monsignor Joseph Clifford Fenton (January 16, 1906 - July 7, 1969), a priest of the diocese of Springfield, Massachusetts, was professor of fundamental dogmatic theology at the Catholic University of America and editor of the American Ecclesiastical Review (1943–1963).

He is considered one of the most outstanding American Catholic theologians of the 20th century, serving as a peritus for Cardinal Ottaviani at the Second Vatican Council. He was also Secretary of the Catholic Theological Society of America.

Throughout his life, Fenton wrote an abundance of articles, especially on ecclesiology and Church-state relations. Most of Fenton's articles were published in the American Ecclesiastical Review, though he also contributed to Columbia, America, Fortnightly Review, Catholic Educational Review and Le Seminaire. Fenton's writing career also encompasses six books which he authored:

Does God have any power to exert in Church affairs?

Ultraconservative by Jesuit standards? Wow. I'll need to reflect on that one for awhile.

To be reasonable, a leader wanting to know where his direct reports are is sensible. If, for example, the pope requires the counsel of one of the Rome-based cardinals who is out of the country for 1 month without him knowing where he is, how to contact etc and the decision is such that relying on the input of someone more junior isn't practicable, governing becomes difficult. That being said, I unfortunately don't share your optimism about the future and tradition, Father. With progressivism becoming increasingly entrenched in the Roman Church, centralization and authoritarianism will probably just serve as conduits to advancing personal agendas that aren't likely to be tradition minded.

“The superior of the Jesuits made a special effort to meet with Pope John Paul and begged, literally begged him not to make Bergoglio a bishop because he was a sociopath.”

Please provide some_reliable_ authority for this arguably defamatory statement. If you have no such authority for making it, please retract it.

Anon 2 - In a quick search the only place I can find such ranting is at the sedevacantist website Novus Ordo Watch. Of themselves they write, "This theological position we subscribe to is typically referred to as “Sedevacantism”, from the Latin term sede vacante, “the Chair [of Peter] being vacant”. We believe that the men who are considered by the world to be the successors of Pius XII — that is, John XXIII, Paul VI, John Paul I, John Paul II, Benedict XVI, and Francis — are usurpers, false popes (anti-popes) who have occupied the Chair of St. Peter not only illicitly (without permission) but also invalidly (without legal or moral force). Indeed, we believe that the Throne of St. Peter has been vacant (empty) since the passing of Pius XII, although we acknowledge as a possibility that a true Pope was elected at some point after Pius XII and then impeded from exercising his papacy."

It doesn't seem like an effective method of control in the days of twitter, facebook, email, and blogs. Especially from a pope who uses them all. He might be clamping down on some potential scandals.