This is a very appropriate hymn for the elimination of mediocre, superficial and banal music in the Catholic liturgy: 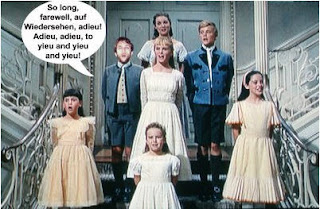 No matter how objective one might be about musical choices in the Mass, it still devolves to personal taste of the priest, the musician or anyone else who has an opinion, which is everyone!

What needs to take place in my most humble opinion is a reiteration of Musicam Sacram and placed in the General Instruction of the Roman Missal. No choices for the replacement of the Introit, and offertory and Communion antiphons may be allowed, although additional filler music may be allowed at the procession and at the offertory and communion to cover the action.

A national hymnal mandated for every language group must be establish as the Episcopalians, Methodists, Presbyterians and Lutherans already have--wouldn't this be a great ecumenical gesture to follow their lead?????

And this hymnal should have the propers in a simple chant setting that the congregation can learn, not to exclude more elaborate settings in chant or polyphony.

The hymnal only allows hymns that are doctrinally and dogmatically correct in Catholic theology, piety and spirituality and it should be made clear what is appropriate for the Mass and what is better suited for devotions.

Only when we get a national hymnal and put the money mongers in the Catholic music industry out of business will be see authentic post-Vatican II liturgical renewal!

Fr. Dwight Longnecker has an article in Crux which while good, still keeps that dag nabit door of personal preferences of music directors and priests, not to mention individual Catholics cracked open and thus will do nothing to move us forward and away from all the banalities that pass for music in the liturgy. His article is titled:

Here are some of his "soundbites:"


It is astounding how much the parishes and pastors who have embraced “the Spirit of Vatican II” have done exactly opposite of what the documents of the Second Vatican Council actually prescribe. The Council allows for four types of sacred music: “Gregorian chant, sacred polyphony in its various forms, both ancient and modern, sacred music for the organ and other approved instruments, and sacred popular music, be it liturgical or simply religious.”

A few months ago the pope addressed a conference in the Vatican convened for the fiftieth anniversary of Musicam Sacram - “Instruction on the Music of the Liturgy”- a Vatican document following the Second Vatican Council, which discussed the “ministerial role” of sacred music.

Lovers of the the suburban “folk mass” (sarcastically referred to as “the old folks mass”) will be surprised to find that the Vatican II document calls for Catholic liturgical music to consist of four types of sacred music: “Gregorian chant, sacred polyphony in its various forms, both ancient and modern, sacred music for the organ and other approved instruments, and sacred popular music, be it liturgical or simply religious.”


When it comes to “other approved instruments” the document states, “In permitting and using musical instruments, the culture and traditions of individual peoples must be taken into account. However, those instruments which are, by common opinion and use, suitable for secular music only, are to be altogether prohibited from every liturgical celebration and from popular devotions.”


That would seem to rule out the saxophone, xylophone, cowbells, slide whistles, accordions, kazoos, bongos, banjos and guitars.

It is astounding how much the parishes and pastors who have embraced “the Spirit of Vatican II” have done exactly opposite of what the documents of the Second Vatican Council actually prescribe.
How many parishes do you know where the liturgical music featured is Gregorian chant or polyphony?

Instead we have sentimental ditties with music that sounds like it comes from a third rate Broadway musical. Most American Catholics listen to music led by a praise band that features dubious theology, cliched music and sappy words about gathering together for a group hug.

“Mediocre, superficial and banal”? Rome has spoken. That settles it.

Firstly, the function of liturgical music is to enhance worship. St. Augustine famously said, “When we sing we pray twice.” In other words, the music serves the prayer. If this is the case, then sacred music should offer worship to God.

When evaluating a hymn or piece of music for the choir we should ask whether the words and music are about God or about us. This should be fairly obvious and yet when you open a contemporary Catholic hymnbook you will find an extraordinary number of hymns which are not about God, but about the community, its needs and its mission.

Secondly the music should be singable. Musicam Sacram insists that full participation is the aim of liturgical music. Ironically, much of the popular church music is difficult for congregations to sing. Often the music was written for a soloist to perform rather than for congregational singing.

The rhythms are irregular, the words and music are often jarring, and when led by a guitar or a praise band the effect is one of performance rather than participation. Simple Mass settings and well constructed hymns encourage congregational participation.

Thirdly, the words should be fully Catholic and complement the liturgy. Music is not chosen just because we like this song or that song. Instead the lyrics express theology.

Not only should the words communicate Catholic truth, they should also echo the readings and themes of worship for the day. In that way the music reinforces the full participation of the worshippers.

A mediocre praise band and a sincere soloist warbling a Joan Baez number is distracting, but so is a high falutin’ choir intoning an inaccessible medieval anthem or an operatic soprano belting out a Mozart aria.

In the ordinary Catholic liturgy, however, simpler standards should apply. The music should be high quality, reverent and profound - which is the opposite of “mediocre, superficial and banal.”
Posted by Fr. Allan J. McDonald at Thursday, June 08, 2017

You vill zing vhat we tell you to zing und you vill LIKE it!

I don't think this will work. The problem is that you can sing the songs just as you can pray a NO Mass: reverently or irreverently and they are both right. The key is to have the people seek out reverent and orthodox hymns as an assistance to expressing their orthodoxy rather than have them simply sing from a script. People often accuse the VO of having lost its relevance to people because they lost their understanding of it. It seems that what they lost was the will to seek it on even the most basic level. Strapping them in a high chair and feeding it to them is not the same as having them learn to seek good food to feed themselves.

The best way to pull the Novus Ordo out of the ditch would be a ten-year moratorium on any hymns at all at Mass. Just sing the Mass. What's so hard about this?

I think the comment provided at 10:13 am is exactly why nothing will change. Anger about the music is so entrenched that I don't see a way out short of something forced. Much education on what liturgical music should be vis-a-vis the liturgy would needed to stave off resistance.

At divine liturgy, propers are always sung. How good it would be if in the Latin Church, these too were treated as a non-negotiable. Then, and as you suggested Father, processional hymns could be added.

While much of the music since '69 is banal, superficial and not to my taste, it isn't horrible in entirety. To be fair and balanced acknowledging that like many here, I prefer propers, many too are attached to some of the more recent hymns and shouldn't be disparaged because of it. A hymnal that respects tradition and perhaps harvests theologically sound hymns from more recent years WITHOUT numerous options that would get us right back where we started is probably the best chance of something like this being successful.

No anger here. But a recognition that the Catholics of Spokane, La Jolla, Wichita, and New Bedford gain nothing by being given a "national" hymnal.

Anonymous @ 8:41 - Would you please help us to understand why the above mentioned wouldn't gain from having a national hymnal?

Thank you in advance.

Here's what they would gain:

That's what the "national" hymnal would gain for them.

Back to the article: I generally agree with the limitation of musical instruments but only because the average person would not seek to play a tune reverently on the banjo because they are playing it according to a limited model of the instrument. A priest with a terrible voice only needs to work on his execution to have adequate chant. A sincere effort to please the Lord can rehabilitate many instruments, I believe.

In fact, I am acquiring a hurdy-gurdy specifically to accompany chant in our schola. I don't see it on the List of Prohibited Instruments (check the history to see why) so it should go over well. I hope.

Unless one of the schola members has perfect pitch (which can be both a blessing and a curse) a hurdy-gurdy drone would counter the omnipresent tendency of unaccompanied chant to go progressively flat. I would prefer a serpent, which French scholas were still using in the late 19th century!

I will need to check into that, John. I am planning to play the drones in 'old A' nearer to Bb anyway. That is where I like my fiddle and mandolin for the Old Time music I prefer. Modern hurdy gurdies are much more easily tuned and stable than the old ones so I am hoping to be able to adapt to the choir and not the other way around.

If nothing else I can play it in the pub.

"Authentic renewal of the Ordinary Form Mass." Gives me pause, all by itself.

I grant that with skill, determination, and a great deal of catechesis, it is possible to approach moments of transcendence in the OF. However, the EF is transcendent, even with a weak celebrant.

As to a national hymnal, that could be a great thing, but on the other hand, the USCCB might well select "Breaking Bread", from OCP. Be careful what you wish for, Father.