I SUSPECT SARAH IS NEXT

Cardinal Müller has been dismissed by Pope Francis 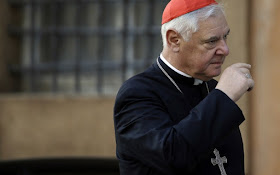 CORRISPONDENZA ROMANA and RORATE CÆLI have just learned that His Eminence Cardinal Gerhard Ludwig Müller, Prefect of the Congregation for the Faith since July 2, 2012, has been dismissed by Pope Francis on the exact expiry date of his five-year mandate.

Cardinal Müller is one of the cardinals who sought to interpret Amoris Laetitia along the lines of a hermeneutic of continuity with Church Tradition. This was enough to put him among the critics of the new course imposed by Pope Bergoglio.

NOTE: Please, be sure to mention Rorate Caeli in all references to this exclusive breaking news.

And why should this surprise us?

Maybe he will appoint that pro abortion, Anglican minister, who he appointed to the Academy for Life to become the new prefect. Or more likely he will get the head of the LCWR to be the new prefect. Would anyone be surprised at what that guy is capable of doing.

If the report in question, then the folks at Rorate Caeli must be pleased as they smeared then-Archbishop Müller when he was tapped (as well as prior to that time) to lead the SCDF.

Rorate Caeli, who attacks His Holiness Pope Francis 24/7, will employ the "sacking" of Cardinal Müller to attempt to defame Pope Francis. But then, that's the game that Rorate Caeli plays.

However, once upon a time, Rorate Caeli trafficked in vicious attacks against then-Bishop Müller.

But now, as they will employ him in their efforts to attack and defame Pope Francis, Rorate Caeli will portray Cardinal Müller as a great man of orthodoxy who was "dismissed" by big, bad Pope Francis.

I'll reserve judgement until I better understand his background; but, my initial reaction is the same as Gene's.