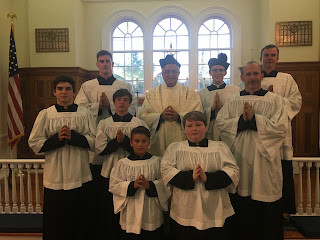 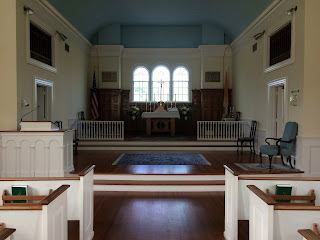 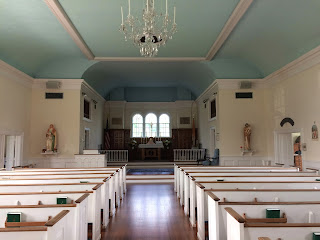 Not since the mid to late 1960's has the Extraordinary Form of the Mass been celebrated in the old St. Anne Church, also known as the Martha/Mary Chapel built by and attended by Henry Ford who named it after his mother and mother-in-law in the 1930's. In the mid 1950's it was acquired by the Diocese of Savannah-Atlanta and renamed St. Anne Mission and later Church.

We had about 150 in attendance on a Friday night at 7 PM for the Feast of the Most Sacred Heart of Jesus, many from the Cathedral's EF Mass Community.

I have been celebrating the EF Mass for almost 10 years. I continue to see it as a "boutique" Mass appealing to a small number of Catholics who can become a leaven in the Church to fight against the secularism that is infiltrating the actual beliefs of Catholics over the God given beliefs of the Church.

I continue to prefer a "renewal in continuity" approach to the EF Mass, but doing what Sacrosanctum Concilium actually desired, noble simplicity, maintain the chant and Latin patrimony of the Church and allow for some vernacular and expand the Scriptures in the lectionary.

I am perfectly happy with our lectionary as is but would prefer Graduals rather than Responsorial Psalms with its useless repetition.

These norms already allowed in the Ordinary Form's GIRM should be mandated with no other options:

2. Mandate Ad Orientem for the Liturgy of the Eucharist

3. Kneeling for Holy Communion and only intinction when the Precious Blood is offered.

Apart from these three things which are already allowed but some bishops unfortunately stranglehold, I'll let others decide on what parts of the Mass should be mandated to be said or sung in Latin. I personally believe a little Latin goes a long way and all Latin is way too much.

Finally, we have the template for a true renewal in continuity of the OF Mass in the Ordinariate's Divine Worship, the Missal! USE IT AS THE TEMPLATE FOR OUR RENEWED IN CONTINUITY ROMAN MISSAL! PLEASE!
Posted by Fr. Allan J. McDonald at Saturday, June 24, 2017

I agree with you Father. I really like the Novus Ordo but I think it went to far. I think the Church should restore:

2. For the Penetential Rite restore the old version of the Confiteor and Kyrie and have Mass begun at the altar.

3. Restore the practice of Low and High Mass. Have a Mass with hymns but when for the principal Mass on Sundays and Solemnities chant everything, no hymns and use incense.

5. Tighten up the rubrics and make it perfectly clear how a priest is to celebrate the Mass. No innovations allowed.

7. Restore communion on the tongue and kneeling at the altar rail.

9. Use only the Roman Canon in a low voice in Latin on a daily basis.

11. Restore the use of chapel veils for women and girls (in the Catholic Tradition sacred things and people are veiled).

12. Restore bowing the head at the Holy Name of Jesus.

13. Restore priest genuflecting immediatley after the consecration and the elevation.

15. The veiled tabernacle restored to the center of the altar.

You've posted this sort of thing many times before, and I certainly agree with your observations and pastoral inclinations. It's clear enough that no liturgical reform initiated by the Vatican is possible any time soon. So, a parochial, or even sub-parochial, approach is all that's possible.

But the trouble with the parochial approach is that you'll make parishioners angry and collections will drop, until you're reassigned.

A sub-parochial approach remains an option, with private Mass offered for invited guests of sympathetic, or at least open-mined, persuasion. But then there are bination rules, lack of support from some of the more inflexible EF crowd, and a general lack of time for a parish priest to pursue "underground" liturgical reform.

So, I just don't know what the answer is. The once promising liturgical bloggers such at Fr. Z and the NLM have gone so far into EF fantasy that they're no longer helpful. Perhaps the next pope will conclude that his predecessor has made such a mess of doctrine that it's better to focus on liturgical reform for a while until memory of Francis fades.

Or, a surprise divine intervention?

I agree with both comments above. I have said this over and over before and I will say it again. The single most appreciated reform of Vatican II was the allowance of the vernacular as it was done in the 1965 Missal. The vast majority of Catholics love to be able to worship in their native tongue. If the 1965 Missal had been the extent of the reforms of the Mass and nothing else, I think we would be in a far better liturgical place today. But alas!

While there can be some bottom-up liturgical renewal, much of what is being done today in terms of restoration is idiosyncratic and parochial. The next pastor will come in and undo and this will alienate the laity even further. We can't just keep yanking them around and without any consultation.

After years of being in Macon and with catechesis, we began to celebrate our 12:10 Mass (one of five Sunday Masses) ad orientem and only for the Liturgy of the Eucharist but in every other way it was exactly like the other Masses on Sunday. Then added kneelers for those who wanted to kneel for Holy Communion until we restored the altar railing and the Minister distrusted Holy Communion behind the railing in the chow line approach. then at the 12:10 Mass we asked people to kneel the full length of the railing and the priest and deacon would go to them. This was absolutely marvelous.

Then three years ago we moved the EF once a month Mass to the 12:10 Mass once a month. No one batted an eye.

While the EF monthly Mass continues at 12:10 the new pastor stopped the ad orietem celebration of this Mass rather quickly. Thus only the EF Mass is ad orietnem but he kept the keeling at the altar railing.

To me having the 12:10 Mass ad orientem led to our ability without anyone blinking an eye to having the EF Mass at this time too. Most thought the only difference was that the Mass was in latin!

People go along with ideas they think are their own. You are a gregarious person, you should have discussions with parishoners that are of a like mind and give them pointers how to support the change and confer with thm on how to get the rest of the parish on board. We are called sheep for a reason.

I do not agree that the NO is here to stay and is the way of the future forever. Why would it be more special and immutable than its predicessors?

With the use of the certain options contained in the current Missal, the Novus Ordo can be celebrated in a way that is very close (though not exactly the same) as the "1965 Missal." The biggest problem in most parishes is that many priests simply will not use the options that are closest to the EF and the "65" missal (for instance, penitential rite "A" with the Confiteor and simple, untrophed Kyrie, the Roman Canon and the possible use of at least some Latin, ad orientem canon, and the lawful option for Communion kneeling with the use of hand paten by servers).

More succinctly, the biggest problem with the Novus Ordo is its possibility of less traditional options which many priests choose to use almost exclusively.

Catholics prior to Vatican II prayed in the vernacular, and popular (extra-liturgical) devotions were mainly in the vernacular. However, few people in the Anglo-Saxon world wanted an English liturgy, or envied their separated brethren for having one.

They were not liturgical experts, but (at least in England) knew that their martyrs had died for the same Mass that they attended week in, week out; not Cranmer's Book of Common Prayer, despite its dignified and elevated English.

Out of the blue, we were told (and I was barely 13 at the time) that Latin must go and be replaced by unfamiliar texts set to unfamiliar and markedly inferior music. The vernacularization of the Mass also coincided with the change in orientation.

The views of a dwindling rump of Mass-goers in 2017, most of whom have only known a vernacular liturgy, is neither here nor there.

Good questions. Although Vatican II began with four stated goals, no one seems to have researched the measurable extent to which the post-conciliar reforms achieved, or failed to achieve, those goals. If VCII has been a success, then it should be measurable against its own four goals. If it was a failure, then the pope and bishops should be honest about it and leave it in the past, like Lateran V.

Agree with Dialogue but for one exception:

Fr. Z and the NLM perhaps, realistically, are sinking their energies into the EF reality as opposed to fantasy about how to change the NO. Any change to the NO isn't going to happen for some time, perhaps not even within our respective lifetimes. Increasingly, my efforts, and my heart, are devoted toward attending TLM when I can and Divine Liturgy near weekly. I'm exhausted, frankly, of debating changes that I would welcome with open arms (i.e. PAFOTA, AD Orientem, Propers etc) but I know in my heart of hearts will not be executed in the average NO parish anytime soon, if ever. So, let them have their NO already and burn themselves out with plummeting attendance while at the end of the day, the TLM will still be going strong albeit on a smaller scale and Divine Liturgy options will still remain numerous within a 25 minute drive from my home.