A BETTER SECOND LOOK AT THE 1965 "SACRAMENTARY" 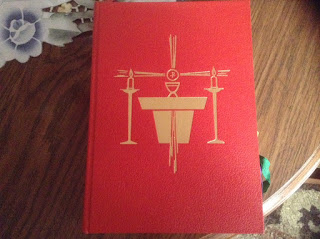 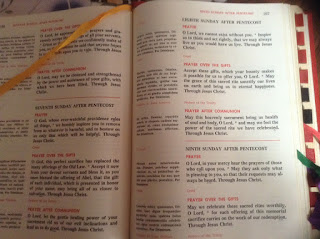 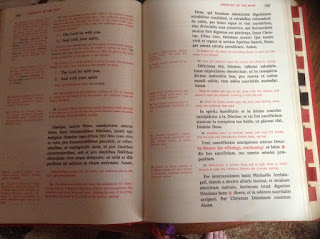 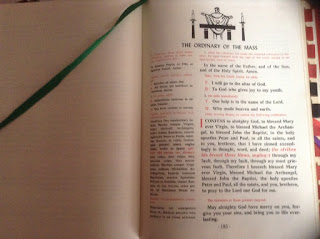 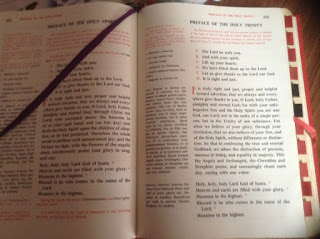 This 1965 so-called "interim" Roman Missal was quickly put together by the then USCCB (not called that then, but there was a national body). It used the English translation for parts of the Mass from the Maryknoll Sunday and Daily Mass pew missal used by the laity for the Mass prior to Vatican II.

Because it was quickly put together and into print in a rather nice altar book, I presume that those who did it thought this would be the revised Mass authorized by the Liturgy document of Vatican II. Of course this book was actually a waste of time and too quickly put into circulation. Only three years later new Eucharistic Prayers and a revised order of Mass (completely non-traditional order I might add) were promulgated and an insert had to be added to this sacramentary. The insert had the revised order of Mass, the three new Eucharistic Prayers, one a completely new composition and the new rubrics for the Mass and the Roman Canon and other canons.

But as I look at the pristine 1965 Sacramentary, I see a Roman Missal that if it had been maintained would have prevented so many of the liturgy wars that are on-going today. There would have been no need to suppress the 1962 Missal either. Both could have coexisted side by side and be the same Missal and Order of Mass despite one having more ritual and all Latin.

Unfortunately, it was with this 1965 "sacramentary" and very early in 1965 or '66 that folk music was introduced into the Mass and the elimination of chanting the propers.  Or maybe the folk hymns (four) were inserted only into the Low Mass version and the chanted or Sung Mass maintained the traditional way to sing a true High Mass. I don't know, others who do need to chime in.

But there seems to me to be a good use of some vernacular while maintaining Latin. All the priest's parts prayed in low voice, to include the Roman Canon, are in Latin and do not have an English translation in the Missal.

The English parts, for the Collect, Prayer over the Offerings and Post Communion Prayer have a smaller print of the same prayers in Latin next to it. But the English is clearly preferred in terms of its position in the Missal and size of print.

The 1965 Sacramentary has only minor rubrical changes. No longer is the paten placed under the corporal until after the Pater Noster. The Host remains on it thus no longer needed the additional rituals using the paten. This seems logical to me. The Per Ipsum no longer has it ritualized flair and is basically what the Ordinary Form has today.

The Prayers at the Foot of the Altar now has the Requiem and Passiontide form which eliminates the recitation of Psalm 42. If the Asperges or Vidi Aquam is used, the PATFOTA are eliminated which I think is a good revision. Keep in mind the Kyrie is not seen as penitential or a part of the PATFOTA or the Asperges and is always said or sung in this form of the Mass after the priest ascends and kisses the altar.

So there is an attempt at a sober "noble simplicity" that does not destroy the integrity of the 1962 Missal at all.   If only! But there is hope that the 1965 Order of Mass will be allowed for our new Ordinary Form Mass. Time will tell, but the Anglican Use already has it approved by Pope Francis!

I asked myself then and still do - why was the vernacular the preferred option for the sung Ordinary which everyone was familiar with in Latin? Where in the book are the Introit, Gradual, Alleluia/Tract, Offertory and Communion? In a Low Mass does the priest simply omit them?

The translation is in any case not the same as that used in England (and Ireland was different again). The Maryknoll Propers were much better than ICEL 1973 and we didn't have approved translations in England so they had to stay in Latin.

However, there is no point in lamenting 'the Mass of the Council that never was'. Read 'Inter Oecumenici' (1964) and it is clear that this was only a preliminary stage in the reform. The priest is already a 'presider' and the woodcut illustrations in your book show what is to all intents and purposes a Novus Ordo celebration.