YIKES, WE HAVE TO REMOVE OUR NEWLY INSTALLED ALTAR RAILING! 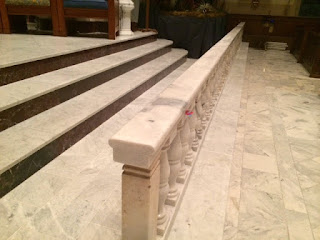 But don't panic over my sensational headline. I'm not being forced to do so by any liturgical terrorists in the diocese. We are a victim of circumstance and the altar railing will return as it is now.

At first I couldn't believe what I was seeing with all these lines or cracks appearing. But our contractor removed some tiles to see what was going on and admitted that his subcontractor had botched the job! The entire length of the new step has to have all the tile removed, the joists properly spaced and new marble tiles reinstalled! I'm not sure if the altar railing will have to be removed or not. The marble under the kneeling pad and on which the altar railing itself rests is more solid and a single piece of marble (as opposed to marble tiles) and no cracks have appeared in it. So I am hoping the reconstruction of the joists can go under the railing rather than removing the railing and then reinstalling it. WHAT A MESS!

It will take several months for the new marble tiles to be fabricated and sent to us and a few weeks of dirty, dusty reconstruction. Just pray that the railing doesn't have to be removed and then reinstalled to shore up the mistake in construction!

The only positive note is that we don't have to pay a dime to correct the contractor's mistake!
Posted by Fr. Allan J. McDonald at Monday, July 27, 2015

Bummer....When the contract for the work was awarded, I hope it didn't go to the lowest bidder.

It sounds like your contractor has stood up,to make it right. That is a good thing.

Glad it was caught before a catastrophe!

Is the work going to cost the parish?

lol, Anonymous @7:50, you should win an award for that comment! That particular acclamation you're referencing was the one I heard the most under the old translation.


The railing looked nice
'til came the interstice,
T'was installed, not so well,
and so rupture befell.

Some tiles now have split,
Leaving some with a rift,
Though tiles have 'come rended
It will all soon be mended.