I've had to delete some posts in order to correct some kind of posting mishap that placed a copied text on my general layout, which is weird! 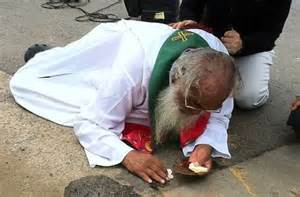 I recently celebrated a funeral Mass for a friend who had recently moved from Augusta to North Carolina. They had only been there a few months and he was ill the whole time. The parish where the funeral was had a magnificent bereavement ministry. There were limits to what the family could plan for the funeral. They had choices for the readings and hymns within a confined list.

But, and this is what I like, the readers for the Scripture and the Extraordinary Ministers of Holy Communion had to be from the parish's bereavement committee (in other words, parish installed readers and EMC's). This is excellent. I would recommend it for weddings too.

But we all know that the 1970's mentality taught to children beginning in Catholic elementary school was that they should and must plan liturgies, pick and choose, manipulate and be creative. Well the chickens are coming home to roost with our very narcissistic generation of liturgy planners who want it done their way (which is the theme song of hell, "I Did It My Way!")

Well, the Deacon Bench is reporting on yet one more Funeral Mass Gone Wild something poor former PI is in complete denial or hasn't had enough funeral Masses to know what he is talking about.

Here is the sad story as reported by the Deacon's Bench:
From a TV station in Rochester, New York:


A local family said a priest suddenly stopped their loved one’s funeral during the ceremony.

“This is the last time we have to pay respects to my sister,” said Klimchuk.  “She’s 35 years old. She just passed away, I mean we needed to do certain things in order to pay our respects and say goodbye.  He denied us that.” The family claimed he was rude and could have handled it differently, adding they were appalled. 13WHAM News reached out to the church Tuesday night and asked Father Sirianni if he would speak with us. He declined.

The Diocese of Rochester released the following statement Tuesday:

“The Diocese office has not received any complaints. The liturgical rites of the Catholic Church, especially as they concern the celebration of the Holy Sacrifice of the Mass, are governed by universal norms of the General Instruction of the Roman Missal, the Code of Canon Law, and the Order of Christian Funerals. The latter provides for Words of Remembrance after the Closing Prayer. Regrettably, there was a misunderstanding or lack of information regarding this optional part of the Rite. It appears that individuals became upset when instructed about the proper place for these reflections. When the upset continued, the Funeral Rites were completed with hymns, incensation of the body and final prayers. A Memorial Mass will be offered for the deceased tomorrow.”
The family said a letter has been sent to Rochester Bishop Salvatore Matano. They said they do not want similar experiences to happen to other families.

My comment: This whole thing reminds me that Catholics now see themselves as consumers and priests are sales persons like at Sears. The customer should get what they want. They are always right!

Did the priest overact? Maybe, maybe not. We don't know the back story and what he had to put up with in terms of this family wanting this, that and the other during the funeral. I'd love to know what music was chosen! I'd like to know what the planning process was like too.

Should a priest who becomes enraged by something happening at Mass, any Mass, continue and in continuing enraged, would it be a sacrilege? Is it better to end it or find another priest to end it if the Mass has proceeded to a point of no return?
Posted by Fr. Allan J. McDonald at Friday, July 24, 2015

The celebrant should not become enraged. I've given homilies where I've had to stop and finish at the end of the Divine Liturgy on account of the children in the church. I'm not going to scold them and their parents for something children do naturally.

This is a little different, I know, but wouldn't they have consulted the priest before the funeral? Why didn't this come up? Or did it come up, and he refused? I'd like to say funerals aren't the time to scold people (or become "enraged"), but some (FrZ sometimes posts articles about this) use the funeral as reason to try and receive the Eucharist in a state of sin, or whatever; later, they use the funeral setting as a 'scenery' when the drama is acted out on the news. This is just as wrong.

Someone help me: does the new Mass have a vigil the night before the funeral before? Honestly, had the priest refused to have an extra reading, this additional reading could have been done in conjunction with the Office of the Dead, or else along with other readings, assuming the funeral-proper is the only thing Catholic mourners do. The idea these days is that funerals are 'up and done' with no other action required.

Sorry this is unrelated, but Homiletic and Pastoral Review has an excellent article on KNEELING BANS that I think you would be interested in.

The body is received into the church the evening before the funeral and there is a ritual for this even in the Novus Ordo, the funeral rites of which are so lamentable that I shall refrain from referring to them. Vespers for the dead (Placebo) and Matins (Dirige) are unlikely to be used outside a monastic setting although in pre-Reformatiom England they were almost de rigueur.

This all reinforces the point I made a few days ago. In some parts of Europe and in the United States one even has a 'funeral Mass' in the presence of the already cremated remains. This would make sense if the deceased had been incinerated in, for example, an air crash, in which case they would be placed in a coffin. But the idea of interment preceding Requiem Mass turns the whole liturgy on its head. It's madness, but we Catholics are not strangers to this since V2.

When Orthodoxy was deeply compromised by the iconoclastic movement Rome remained orthodox. Perhaps the time has come when the Byzantine Church needs to rescue Rome from the tide of Modernism and relativism which seems to have engulfed her. Oremus pro invicem.

Carol:
I read the article. I did not know about this.

Below is the link:


To kneel or not to kneel?