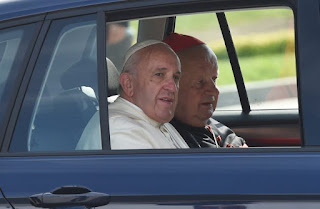 Orthodox Catholics, who are traditionalists also, always pray for the pope, never denigrate His Holiness and politely engage in conversations, written or verbal when points of disagreement occur.

Progressive type Catholics of the late 1960's who initiatially loved Pope Paul VI became completely unglued when His Holiness reiterated the doctrines of the Church concerning natural law and pro-creation--something progressives thought would change since all matters of things were changing in the 1960's. Progressives did not promote the development of doctrine to make it clearer, but wanted doctrines to change, such as our teachings on natural law, the nature of marriage, and even the dogma of transubstantiation to make it more appealing in the ecumenical realm.

When Pope Paul VI realized the extremes to which the progressives wanted the Church to follow, His Holiness was smart and savvy enough to put the breaks of such heterodox views and His Holiness paid the price for it; His Holiness was despised by the very same Catholics who lauded His Holiness leadership prior to 1968.

Today we have an ambiguous pope who is proving to be a progressive on so many areas but His Holiness ambiguity doesn't make all things clear. Thus there is a need for clarification and an answering of the concerns of those who have voiced concern to His Holiness, especially the cardinals and bishops of the Church, but the laity too, have a right to clarification.

Seeking this clarification must be done in charity, not rancor and as faithful Catholics we must respect the Pontiff even when we disagree with this, that and the other that is occurring and the massive confusion that ensues.

But most importantly prayer, not rancor must reign and our sure and certain faith that the gates of hell shall not prevail against the Church.
Posted by Fr. Allan J. McDonald at Tuesday, October 31, 2017

Pope Francis shows no charity whatsoever towards those he disagrees with. He sets the example. Yes a pope deserves respect but then again a pope would uphold the teachings of the Church.

Fr M:
You speak of Paul VI and how after 1968 (Humanae Vitae), he became the enfant terrible of the "progressives", going so far as to react in 1972 by declaring that the smoke of Satan had entered the Temple. During his pontificate he failed to see what these "progressives" around him were all about, the way they duped him particularly in the liturgical "reforms", until it was too late. At least he was able to exile one of its important leaders, Bugnini. I hope Francis will realise how he is being used by those around him to implement not his inspired ideas, but of those around him, those with the ideological agenda of philosophical Modernism, and who will stop at nothing to get their ways, that is to say, to get the pope's signature.

Pope Francis shows great charity towards those he disagrees with. He sets the example. Yes a pope deserves respect and he upholds the teachings of the Church.

"Pope Francis shows great charity towards those he disagrees with."

"Pope Francis shows great charity towards those [with whom] he disagrees." What is an example of this? He seems notably uncharitable towards such persons, at least from what I've read.

"Pope Francis shows no charity whatsoever towards those he disagrees with."

I pray for him every day in the prayer to St. Joseph, the part saying,

"Great St. Joseph, you were chosen by God to be the reputed father of Jesus, the chaste husband of Mary ever-Virgin, and head of the Holy Family; you were elected by the Vicar of Christ to be the heavenly Patron and Protector of the Church founded by Jesus Christ.

With the greatest confidence, therefore, I ask your powerful aid in this day for the entire Church on earth. Protect in a special manner with your true fatherly love our Holy Father, the Pope, and all the Bishops and priests who are united to the See of St. Peter; defend all those who labor for souls in the midst of the trials and difficulties of this life; and win for all nations unity of faith under one Shepherd..."

I pray for all of us, the Church.

Who's the Father of Ambiguity?

Thank you for your thoughts, Schoolmarm Padre....just because the Church is being gutted is no reason to abandon politeness.

Fraternally yours, all holy Francis, sincerely,


The dearest and politest servant of The Francis


I see this as a self-inflicted wound by the pope. Pope Francis is well known for making insulting comments. There is even a web site dedicated to listing his discourteous phrases.

In my view, Francis's is ambiguity is deliberate, not a glitch in his manner of speaking or writing. He is ambiguous in order to try and conceal his heterodox "progressive" agenda. Were he to be clear in his statements I suspect the outcry would be much more vociferous, from many more Catholics. Was Saint Nicholas polite to Arius? The increasing anger among the laity respecting his pontificate has a legitimate foundation.

Still, as an angry Catholic I do struggle to keep my criticism within the bounds of civil discourse. Having said that I no longer accept spiritual guidance from him period.

"Having said that I no longer accept spiritual guidance from him period."

"'Having said that I no longer accept spiritual guidance from him period.'


“If a future pope teaches anything contrary to the Catholic Faith, do not follow him.” - Pius IX