DID THE COMMITTEE THAT REVISED THE MASS MAKE IT TOO DIDACTIC, MEANING, TOO CONGREGATION ORIENTED, NOT GOD ORIENTED? HORIZONTAL RATHER THAN VERTICAL, IN OTHER WORDS, LATREUTIC?

A Scripture reading during Mass--is she using God's words during Mass to worship and praise God or is she reading them for the edification and instruction of those before her? 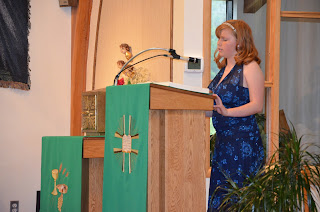 Read these two comments about the use of two separate ambos, one for the Gospel only and the other for the other Scriptures:

--Nor do I (get it) as a post Vatican 2 "student". Are you saying the readings should not be delivered from am ambo or pulpit? If so, I can't see any reason why they should not be---after all, they are being read to the congregation, right? The altar is where the sacrifice is made present---but the preparation of the gifts happens after the readings and the creed. Is there anything wrong with saying the Mass has two main parts?....
"after all, they are being read to the congregation, right?"-------------------
--Not so. At least in the traditional view, where the purpose of the readings is latreutic (directed toward God) rather than didactic (directed toward the people. They constitute praise of God in God's own words.

Just as turning the priest toward the people during the Canon diminished awareness of the latreutic character of the Mass, so did his facing the people for the readings.

To be honest with you, I have never been taught, pre or post Vatican II that the purpose of the readings at Mass were directed to God in praise of God in God's own words.

Given the fact that the Mass, all of it, is about the Church giving praise and thanks to God, it makes sense.

But with the Mass facing the congregation, we think it is all about God instructing us--which He does, but the Mass isn't about God's instructions, it is our worship and praise and thus viewing the readings as a part of this is wholly consistent with the meticulous organic development of the liturgy where all fits together in a logical whole.

HOW MANY OF YOU HAVE EVERY BEEN TAUGHT THIS? I KNOW I WASN'T, NOT PRIOR TO THE COUNCIL AND DEFINITELY NOT AFTERWARDS.

"To be honest with you, I have never been taught, pre or post Vatican II that the purpose of the readings at Mass were directed to God in praise of God in God's own words."

Well, you've had this mentioned to you... by me, on this blog, nearly 6 years ago. Here's a reminder (see the first comment).

I knew you would take the bait! 😇

You know me well, Father!

While we're chatting, I'll be visiting the Savannah area on November 29. If you're available, I'd love to get together.

I'm 29 years old and didn't become a catholic until 2014 but somewhere along the way I heard that the readings were an offerings to God in the liturgy of the word like the Eucharist was an offering to God in the liturgy of the Eucharist. It made sense to me especially after seeing Tridentine masses and realizing the Latin readings were for God and the English during the homily was for us. It was a gray parallel that helped teach me the meaning of the eucharist-just as we offer God his own word that he gave us, we also offer the Eucharist, which we can only give because He gave it first. It really emphasizes the fact that we have nothing to give to God that He didn't already provide for us to be able to give it. It puts us in our rightful place regarding His love and our salvation.

Marc, on the 29 of Nov. I am tied up in the evening. What about lunch that day?
email frajm5380@yahoo.com

"When the Sacred Scriptures are read in the Church, God himself speaks to his people, and Christ, present in his word, proclaims the Gospel" (GIRM, no. 29).

"These words from the General Instruction of the Roman Missal (GIRM) set before us a profound truth that we need to ponder and make our own. The words of Sacred Scripture are unlike any other texts we will ever hear, for they not only give us information, they are the vehicle God uses to reveal himself to us, the means by which we come to know the depth of God's love for us, and the responsibilities entailed by being Christ's followers, members of his Body. What is more, this Word of God proclaimed in the liturgy possesses a special sacramental power to bring about in us what it proclaims. The Word of God proclaimed at Mass is 'efficacious' that is, it not only tells us of God and God's will for us, it also helps us to put that will of God into practice in our own lives. How, then, do we respond to this wonderful gift of God's Word? We respond in word and song, in posture and gesture, in silent meditation and, most important of all, by listening attentively to that Word as it is proclaimed. Following each reading we express our gratitude for this gift with the words "Thanks be to God" or, in the case of the Gospel, "Praise to you, Lord Jesus Christ," and it is appropriate that a brief period of silence be observed to allow for personal reflection. Following the first reading we sing the Responsorial Psalm, a meditation on God's word through the inspired words of one of the psalms from the psalter, the Bible's prayer book."

CCC 1100 "The Word of God. The Holy Spirit first recalls the meaning of the salvation event to the liturgical assembly by giving life to the Word of God, which is proclaimed so that it may be received and lived:

In the celebration of the liturgy, Sacred Scripture is extremely important. From it come the lessons that are read and explained in the homily and the psalms that are sung. It is from the Scriptures that the prayers, collects, and hymns draw their inspiration and their force, and that actions and signs derive their meaning."

"Latin readings were for God and the English during the homily was for us."

A homily is a sermon or commentary on the Gospel. Did you mean "the English during the Gospel" and not the homily?
Beyond that, there are other parts of the Mass that also contain the Word of God. The Power, Love,Spirit and Wisdom of God are in His Word. He conveys of Himself to us through His Word and we give back to Him to the degree that we take in and accept what He offers us. And of course His Holy Word precedes His greatest gift to us, the Holy Eucharist which the priest offers back to God on our behalf.

In the Episcopal Church, often the choir faces each other (monastic style), one behind the pulpit and the other behind the lecturn. The clergy recite the litgurgy of the word from the side, and then after the peace (which occurs right after the prayers of the people), they proceed to the altar (sometimes which is a back altar, other times free-standing, "local option" here) for the preparation of the gifts and the liturgy of the Eucharist. The altar rail tends to be at the far back, behind the choir. As liberal as the Episcopal Church is these days, I have never seen a single parish where the clergy sit immediately in front of the altar.

I don't think Father M you would like the design of my church in 30327. The clergy sit behind the altar (above the altar) for the liturgy of the word.

George, at several of the TLMs I've attended, the readings during mass are in Latin and then they are read again in English before the homily

OK. It was the homily part of your first comment had me wondering.

I think you mean 'iconostasis' 'Iconoclastic' refers to the destruction of images.