"In Europe, theologians immediately have to have the exact Council text ready when words like 'faith' or 'mercy' are used. This kind of theology with which we are familiar doesn't exist in Latin America. they are more intuitive (inductive?) there...they look at a text without considering it as part of a whole. We must somehow respect and accept this style. But I nevertheless wish that as far as teaching documents are concerned, clear theological preparation must take place."--Gerhard Cardinal Mueller 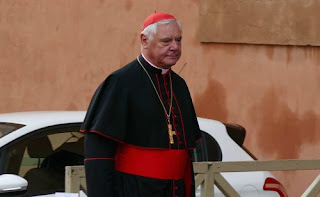 When I was on sabbatical in Rome last year at this very time, we had a local theologian try to explain Pope Francis' primary way of "doing" theology. Contrasted with Pope Benedict and almost every other pope prior to His Holiness, Pope Francis' method uses almost exclusively inductive  reasoning whereas the papacy prior to His Holiness, as well as academic theologians in Europe and the USA use a more deductive method of "doing" theology and teaching the faith.

Below is an article I reproduce on the differences in deductive and inductive reasoning. I reproduce it from a blog named  wiseGEEK.  It helps us to understand Pope Francis as well as Cardinal Muller's astute insights about Pope Francis' confusing method of reasoning and teaching which is quoted above.

A simplistic example of inductive reasoning might start with an observation such as “All of the cows I have ever seen are spotted.” One might, in turn, think that therefore all cows must be spotted. This is not actually the case, but given the available information, one might be forgiven for thinking it. The next step in this logic might involve attempting to find things which disprove the assertion that all cows are spotted, as might be done by asking other people if they have seen cows which are not spotted.

In a famous example of inductive reasoning, some people in the ancient world believed that meat spontaneously gave rise to maggots. Their conclusion was based on the observation that if meat was left out, maggots would appear on it. Someone else decided to test this theory by seeking for disproof — would it be possible to leave meat out and not have maggots appear? By sequestering meat in various containers next to fully exposed meat, the scientist realized that the maggots were, in fact, the result of eggs laid by flies.

The brain is so adept at both deductive and inductive reasoning that it often does it on a level which people are not fully aware of. Especially in the case of children, this type of reasoning is used to make sense of the world and the things observed in it. As can be seen, it is possible to use both approaches to explore a logical problem.
Posted by Fr. Allan J. McDonald at Wednesday, October 04, 2017

Yikes. “You know how those Latin American brains work differently than ours...”

Maybe someone can provide some "reasoning" this morning why, yesterday, 99 percent of House Democrats voted against a 20-week abortion ban? Granted, most abortions occur before then (not that it makes abortion any less evil, whether 20 weeks, 10 weeks or whatever), but am I wrong in thinking the abortion lobby's grip on the national Democrats is as strong as ever? The Democrats rail against the 59 killed in the Las Vegas massacre yet at the very same time defend the 3,000 or so abortions that occur every day in this nation. Even Nancy Pelosi could not vote for a 20-week ban........Canon 915, where are thou?!?!?

Abortion kills far more people in this country than firearms---seeming to suggest Congress should focus maybe more on the former?

Inductive vs. deductive reasoning does not figure here as the point is what is being said. The intuitive approach as Mueller describes it is just looking for texts to justify one's preconceptions, ignoring the meaning of the text in consideration of its relation to the whole. The pope may quote Aquinas, but he purposely avoids giving it a read in the context of what Aquinas meant by that quote in his argument. This is something one would expect of someone who is not particularly educated, but since that is not the case, it is clear that there is an agenda involved, probably neo-Modernist, that takes feelings as primary at the expense of ratiocination. If this is what is happening in Latin America, you have to wonder to what extent the Church there is Catholic.

But this is all a moot point, since the Church in Latin America is quickly disappearing in favour of the Evangelical and Pentecostal sects, and one does not have to wonder why.

We must somehow respect and accept this style. But I nevertheless wish that as far as teaching documents are concerned, clear theological preparation must take place."--Gerhard Cardinal Mueller

I could be wrong but, this reads as though the occupant of the Office is not wholly qualified and we must find a way to work around that.