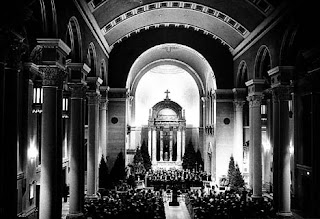 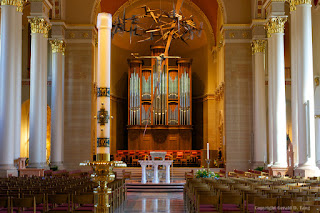 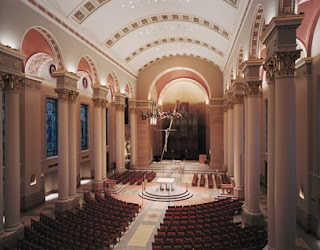 Raleigh's Most Holy Name of Jesus just consecrated in the now. Will some bishop in this cathedral's future make it into an after concoction according to the Milwaukee's cathedral's attempt at imposing a low Christology on it?: 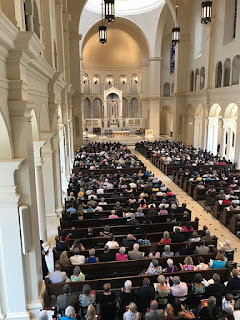 And now some musing on modern Catholic liturgical music today:

Tom Makin formerly of Macon, a former parishioner of mine from years and years ago at St. Joseph in Macon, made this comment on yesterday's liturgy dedicating this magnificent new Cathedral:

Watched for a while....very ecumenical, lacked solemnity and gravity, too much music as entertainment. When living in Omaha, was part of the building and dedication of a new and magnificent church, St Vincent dePaul. It was a solemn occasion...dedication with great dignity befitting the moment a church is brought to life so to speak. Sorry to see what happened today in what has to be a most wonderful space.

Vatican II's document on the Liturgy, Sacrosanctum Concilium, asked for noble simplicity in the Liturgy, which I believe to this day, referred to the pontifical Solemn High Mass with deacon, subdeacon and very, very complicated rubrics and choreography, not your typical parish Low Mass or High Mass.

Vatican II also called the Church to move away from "triumphalism." Yet, when it comes to Ordinations of clerics, be they deacons, priests or bishops as well as the consecration of churches and cathedrals, the music in American Catholic dioceses is anything but noble simplicity. It is triumphalism that boarders on or actually becomes "entertainment."

Instead of chant without accompaniment or simply the pipe organ, orchestras are chosen, trumpets and tympani are used with fanfares and flourishes and it all sounds like the music score from Star Wars or some other Hollywood (and now Georgia) movie music score.

I wish, oh, how I wish, bishops and pastors would take their cue for appropriate liturgical music which isn't triumphalism from papal Masses at St. Peter's Basilica. I have been to many outdoor Masses there with an extremely multi-cultural attendance and this is what is sung:

1. There may be an entrance hymn to accompany the procession, but once the pope approaches the altar to incense it, the Introit of the day is chanted. Why or why couldn't there be a Latin chanted Introit added to a hymn with only organ accompaniment at yesterday's dedication? There is a Latin Introit for the consecration of churches!

2. Why or why do we have to cater to everyone's language group or at least some or ethnic style of music at these cathedral Masses? At St. Peter's there is none of this. The only nod to doing this is at the Universal Prayer with different individuals praying in their native language  (a bit contrived I think and unnecessary.)  At St.Peters' the propers and the congregation's sung parts of the Mass, such as the Gloria, Credo, Sanctus and Agnus Dei are chanted in one of the appropriate Latin chants of the Church's chant patrimony. Cathedrals in particular should use only these Latin chants to unify the congregation rather than "Balkanize" the congregation by trying to appease each language or ethnic group. This is long past its expiration date!

Chant and sober anthems would go a long way to being faithful to Vatican II's desire for the Liturgy!
Posted by Fr. Allan J. McDonald at Thursday, July 27, 2017

"Vatican II's document on the Liturgy, Sacrosanctum Concilium, asked for noble simplicity in the Liturgy, which I believe to this day, referred to the pontifical Solemn High Mass with deacon, subdeacon and very, very complicated rubrics and choreography, not your typical parish Low Mass or High Mass."

I think you're wrong about this. "Noble simplicity" had the sound of a noble sentiment to which no one could object, unspecific as it was. But was planted like a time bomb so that it later could be--and was--used to justify ruthless pruning in the name of the simplicity that the principal framers of SC had intended even before Vatican II convened. This seems clear from a reading of the proceedings of the preparatory commission.

I watched bits of the Raleigh cathedral dedication ceremony as it was livestreamed. A college classmate is a priest of that diocese - I caught a glimpse of him during the broadcast! I have family that I visit there, so I should be able to see it in person before too long.

I was surprised to see how monochrome the interior is. I like the use of marble, but found it, in a sense, bland. I would have chosen to use some gentle colors in the arches and cornices, not just to break up the white on white on white walls, but to add some "depth" to the interior. Some gold along the cornices of the stark white walls would have been my choice.

It's wider than I had imagined from seeing only images of the exterior.

I would think over time flourishes would be added as ar the Shrine of the IC in Washington. W
Stain glass I would think would be in the future although not technically a feature of pure Romanesque but I do like the starkness within magnificence.

An EF low Mass is noble simplicity if there ever was one, Pontical EFSolemn Mass not so much!

"An EF low Mass is noble simplicity if there ever was one, Pontical EFSolemn Mass not so much!"

Neither exhibits noble simplicity in the sense intended by the framers of SC. Both have the same redundancies like the triple Non sum dignus, multiple genuflections, altar kisses, and signs of the cross.

I doubt that a goal of simplifying the solemn pontifical Mass per se was mentioned in the discussions of the conciliar commission that prepared SC; it' not apparent in the minutes of their 50+ meetings.

I live in Raleigh and I was at the Cathedral for the dedication yesterday. I thought the music was beautiful and heard many comments from others who also liked the music. Yes the interior of the cathedral is rather plain but it is not finished. I read somewhere in one of the many articles published recently that work on the interior will continue for two more years. Also, about half of the windows are stained glass removed from a church in Philadelphia that was closed. The other half of the windows will be replaced with stained glass as funds are donated. The cathedral is currently paid for in full with no outstanding debt.

Southern - Good to know the work on the interior continues! (I hope they don't go overboard.)

Regarding noble simplicity and the triple Domine non sum dingus in the EF---what about the repetitive refrain, "Glory to God", in at least one of the English sung versions of the Gloria?

Not to mention the repetition of the response in the Psalm, completely redundant when (as is usually the case) it isn't sung. I've even heard the reader announce: 'The Responsorial Psalm. The response is ...'

There is some repetition in Chant, for example the antiphon at the Introit, and the Alleluia repeated after the verse; but nothing to rival one 'modern' version of the Sanctus where 'Hosanna in the highest' is repeated about twenty times, each repetition drawing ever more attention to the triteness of the music.

I liked the interior of the Raleigh cathedral. Of course it's not finished - neither is Westminster Cathedral after well over a century. The free-standing altar is of good proportions and can be used in either orientation. The reservation of the Sacrament under a ciborium magnum at the apse end is not traditional for a cathedral, where it usually has its own chapel, but is nonetheless striking.

The liturgy itself was mind-numbingly dull. Far too much talk, and the Mass itself, inexplicably, was not sung. There was a moment of comic relief when the altar was washed and dressed by an army of 'Mrs Mops' complete with 'pinnies'. Hardly PC!

And the commentator seemed to think IHS is a Latin inscription. I don't know about anyone else, but I couldn't have sat through four hours of this.

Compared to some in it's peer group, this cathedral is a triumph. I can only imagine how stunning it will look as, over time, decoration of all types is added to finish this beautiful space. Kudos to Bishop Burbidge. As John points out, though atypical for a cathedral, the centrally reserved sacrament certainly sets an appropriate tone with appropriate permanence when compared to the renovations and flexible seating inflicted upon the cathedral in Milwaukee.