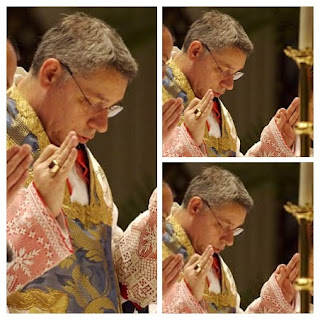 The law of prayer, of course, is the law of belief. Some Catholics are dualists and perhaps the Ordinary Form of the Mass has formed them in this heresy.

This is what they complain about as having too much emphasis compared to the Ordinary Form which is minimalistic:

1. EF Masses involve too much material beauty, like sumptuous vestments--look at the glorious vestments at the head of this blog from a recent Mass at Notre Dame--this, especially the albs worn, are anathema to dualists.

2. The priest has too many external gestures required by meticulous rubrics which do not allow for ad libbing. The dualist believes that the priest should not make multiple physical signs of the cross on himself or anything he blesses or consecrates. Think of the number of "signs of the Cross" the priest makes over the unconsecrated and then consecrated species of Holy Communion. Dualists hate this and what it eliminated as it implies too much physical worship associated with the priestliness of the priest.

3. The multiple signs of the Cross are anathema to the dualists when the priest prays the Roman Canon? They do not believe that the body should be used too much in worship. They don't believe that making the sign of the Cross over and over again is like praying the Rosary with its multiple Hail Marys or Our Fathers or Glory bes--one should be sufficient for both the canon and then logically for the Holy Rosary.

4. Like the Sign of the Cross which when multiplied during the Mass is a physical form of prayer, using one's body to aid in the worship of God, so too are the multiple genuflections that incorporate the entire body of the priest in an act of worship. Dualism despises this. Thus the multiple genuflections of the Extraordinary Form of the Mass at the consecrations, after the Per Ipsum, any time the pall is removed from the chalice of Precious Blood, at the Incarnatus Est, at the Last Gospel, is deemed too much use of the body at worship and thus eliminated in the Ordinary Form. Most priests today don't even bow their heads at the Holy Name of Jesus, Mary or Joseph, let alone bow at the Incarnatus Est of the Credo! They may do spiritually, but who knows.

5. And then these heretical dualists complain about what they call a "fetish" when the priest, using his index and thumb, honors and worships even the smallest of particles of the Most Holy Eucharist attached to these digits. Dualists hate when the body is used to honor God!

I could go on and on but let me make my last point. These physical acts of worship of the priest, many of which are private, are meant to enhance and strengthen each priest's personal Catholic Faith and is done so publicly.

But these physical acts of worship of the priest in the Extraordinary Form of the Mass also strengthen the awe and reverence of the laity who know why the priests uses his body to worship God.

Those people my age and older will recall that the generation of Catholics fully form in Catholic truth about God and the required awe and reverence in His Divine Presence was exceptionally powerful, physical and spiritual in the Tridentine Mass but not so much in the Ordinary Form of the Mass.

Many orthodox and well-formed Catholics who knew that dualism was a heresy, resented the dualism of the Ordinary Form of the Mass and how so many priests went beyond what the OF Mass offered, often not even genuflecting at the Mass whatsoever and using minimalistic vestments, such as only the alb and stole, if even these. Sad, to say the least.

These Catholics at the cusp of the changes in the Mass stated the obvious, from the physical point of view, the Ordinary Form of the Mass was not and is not as reverent as the Mass of the Ages. How sad is this truth?
Posted by Fr. Allan J. McDonald at Tuesday, July 11, 2017

As soul and body are created at the same time, it seems appropriate that in addition to the mind, they are engaged for divine worship. As for detailed rubrics, multiple signs of the cross and conjoined digits; to me, they ephasize the magnitude of that which is taking place when the spirit is called down upon the altar, forces discipline therefore eschewing sloppiness and provides the ultimate in terms of care and respect in terms of handling the consecrated and then broken host.