By one of the greatest writers of the 20th Century, Paul Claudel, writing for the most important French daily, as the proponents of the "Liturgical Upheaval" that would lead up to the post-Vatican II disasters, especially the New Mass, started to abuse the Traditional Mass with the illicit posture "facing the people". 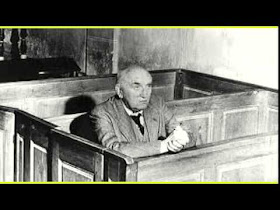 I wish to protest with all my strength against the growing practise in France of saying Mass facing the people.

The most basic principle of religion is that God holds first place and that the good of man is merely a consequence of the recognition and the practical application of this essential dogma.

The Mass is the homage par excellence which we render to God by the Sacrifice which the priest offers to Him in our name on the altar of His Son. It is us led by the priest and as one with him, going to God to offer Him hostias et preces [Victims and prayers]. It is not God presenting Himself to us for our convenience to make us indifferent witnesses of the mystery about to be accomplished.

The novel liturgy deprives the Christian people of their dignity and their rights. It is no longer they who say the Mass with the priest, by “following” it, as the saying very rightly goes, and to whom the priest turns from time to time to assure them of his presence, participation and cooperation, in the work which he undertakes in their name. All that remains is a curious audience watching him do his job. Small wonder that the impious compare him to a magician performing his act before a politely admiring crowd.

It is true that in the traditional liturgy the most touching, the most moving part of the Holy Sacrifice is hidden from the view of the faithful. But it is not hidden from their hearts and their faith. To demonstrate this, during Solemn High Masses the sub-deacon stays at the foot of the altar during the Offertory, hiding his face with his left hand.We too are invited to pray, to withdraw into ourselves, not in a spirit of curiosity but of recollection.

In all of the Eastern rites the miracle of transubstantiation takes place unseen by the faithful, behind the iconostasis. It is only afterwards that the celebrant appears on the threshold of the sacred door, the Body and Blood of Christ in his hands.

A vestige of this idea lingered for many years in France, where the old missals did not translate the prayers of the canon. Dom Guéranger protested energetically against those who had the audacity to do away with this custom.

Today’s deplorable practice has turned the ancient ceremony upside down, to the great consternation of the faithful. There is no longer an altar. Where is it, this consecrated stone which the Apocalypse compares to the Body of Christ Itself? There is nothing but a bare trestle covered with a tablecloth, reminding usdepressingly of a Calvinist workbench.

Naturally, as the convenience of the faithful was held up as the guiding principle, it was necessary to rid the aforementioned table of the “accessories” cluttering it up: not only the candlesticks and the vases of flowers, but the tabernacle! The very crucifix! The priest says his Mass in a vacuum!When he invites the people to lift up their hearts and their eyes…to what? There is no nothing left in front of us to focus our minds on the Divine.

If the candlesticks and crucifix were kept, the people would be even more excluded than in the old liturgy, because then not only the ceremony but the priest himself would be completely hidden from view.

I would resign myself to this situation with the greatest grief, as henceforth, it would appear that not the slightest spiritual effort will berequired of the common people. It seems necessary to stick the most sublime of mysteries in their faces, to reduce the Mass to the primitive form of the Last Supper and in doing so, change the entire ritual. What is the meaning of  Dominus vobiscum [The Lord be with you] and orate fratres [pray brethren] spoken by a priest separated from his people and requiring nothing of them? What is the significance of the sumptuous vestments worn by those we have delegated as ambassadors to the Divinity?

And our churches, is there any reason to leave them as they are?
Posted by Fr. Allan J. McDonald at Saturday, July 29, 2017

Father, just a suggestion. Everybody reads the same blogs that you read. Many of us have already read the articles that you repost. I think it might be good if you wrote your own article s instead of just copy and pasting from other websites. There isn't anything wrong with sharing articles but not so many and all the time. Just a thought.

Except that this particular blog is visited by a number of people who are actually interested in liturgy,and can have their views expressed in a combox which is not inundated with dozens of diverse opinions.

One advantage of having Father McDonald post, for example, stories (the rational stories) from Rorate Caeli is that Rorate Caeli's comment box closed a couple (or so) of years ago.

I enjoy the blog the way it is, Kavanaugh and all.

Father McDonald's blog is outstanding. Father is a holy man who confronts with honesty the collapse (in many parts of the world) of the (Latin) Church. But Father McDonald doesn't give in to left-wing and right-wing extremist views.

Father McDonald, in the manner of a true Catholic, makes known his Church-related concerns, as is his right and duty, in charitable fashion.

Father McDonald sets a beautiful example for us.

I hope that Father continues to blog, as he's an important voice within the Church, for many, many years.

Fr. McD - I really appreciate your publishing the variety of articles you do, because even if many of your readers have already seen them, in every case I have not. I apparently don't visit web sites you do. You provide a valuable service of being a sort of Catholic consolidator, assembling articles you find interesting, or controversial, or informative. I don't read every article you publish here because sometimes one or the other just doesn't interest me, but I appreciate your selection of them nonetheless.

And I also appreciate your readers comments more than I do the ones on the more visited sites. The comments here seem much more focused, insightful and relevant...and sometimes so scholarly I have no idea what they are talking about! But I appreciate them nevertheless.

I especially appreciated the article of this entry. The line, "...it would appear that not the slightest spiritual effort will be required of the common people." struck me as very insightful. Wow. A prophet. :-)

Hope you had a restful and relaxing vacation.
God bless.
Bee

I'm sure, as a pastor, Fr. AJM has more than enough to do yet, despite this reality, this blog survives. Yes, often the articles posted here are easily found elsewhere but, the group of regular commenters, being smaller, makes participating in the discussions much easier. While I enjoy Fr. Z's blog, the comment box, at times, gets to be overwhelming. Here, it is more manageable and I therefore check this blog first. Additionally, most of what is copied over to this blog are current issues/challenges etc. facing the Church. Last, the tone of this blog and the accompanying discussions are reasonable/realistic as opposed to extremist, one way or the other.

Thank you to Fr. AJM for continuing this blog and while I don't know the other commenters personally, I feel like we to some extent do know each other. We are even fortunate to have easily identifiable priests (not relying on pseudonyms) actively participating. I'm therefore glad this is part of my day and I enjoy this blog the way it is.

Interesting that Claudel referred to the 'growing practice' of Mass versus populum at such an early date (January 1955). Although not illicit, it would not have been much in evidence in England and the US.

When, on 7 March 1965, Paul VI celebrated Mass in Italian (to the extent it was allowed) in a Roman parish church, he did so at a dining table set up in the nave of the church. Ironically, the rubrics concerning a papal Low Mass were still in place and adhered to. One assumes that this was not the first time this arrangement had prevailed in this particular church, and I would assume that the pope was sending a clear (if unfortunate) message as to how Mass should be celebrated elsewhere.

The use of a common table instead of an altar was highly significant in those countries which had experienced the protestant Reformation and did more than anything else to desacralize the Mass - possibly even more than the use of the vernacular which occurred at about the same time.