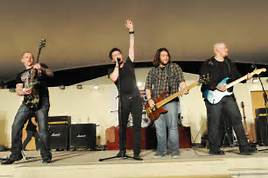 I recently had a conversation with a lapsed Catholic who desired to return to the true Church. In the conversation, she stated she had been to many denominations and so many of them it seem to her that the worship was in reality entertainment or it came across that way.

To be frank, I've had many Catholics tell me that a sung Mass seems like entertainment to them.

And yes, there is a fine line in the liturgy between the perception of entertainment and worship. We are trying to make the Liturgy beautiful through good chanting, instrumentation and quality.

But prior to Vatican II, even when a complicated setting of the Mass was sung, written by one of the masters, no one thought of it being entertainment, although there were/are elements of it. And certainly with Gregorian Chant and Polyphony, that fine line existed too, but no one saw the sung Mass as entertainment.

Today, some do. Why is that?

Because the priest when chanting faces the people and the horrible novelty of moving the choir to the front of the church, right next to the altar with the choir confrontationally facing the congregation, it appears that the priest and choir are entertaining, not praying.

This is not true with  the ad orientem style of Mass either in the EF or OF and with the choir in the choir loft where they should be!

I was at a priest's funeral recently and the choir was good but they sat next to the altar and priest on the same level, confrontationally facing the congregation--a horrible arrangement to say the least on many, many levels, not the least of which is the distraction that they present that moves one's eyes away from the altar to the entertaining choir!
Posted by Fr. Allan J. McDonald at Saturday, July 01, 2017