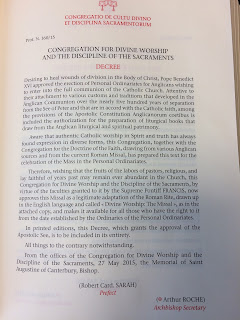 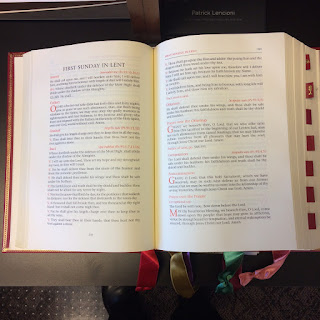 Cardinal Sarah agrees with Pope Francis that the "reform of the reform" is off-putting and create more unneeded fiery rhetoric.

He prefers, and I would think Pope Francis would not be alienated, the use of the language of reconciliation and renewal in continuity which in fact is closer to what Pope Benedict envisioned.

What Cardinal Sarah is seeking to institute for the Ordinary Form of the Mass is a similar spirituality between it and its more ancient predecessor codified in the 1962 Roman Missal, which is the Missal celebrated throughout the Second Vatican Council's proceedings. There should not be independent theologies of the Mass, but a cohesive theology for both forms of the one Latin Rite.

In fact, Cardinal Sarah is agreeing with what Pope Francis has already approved for the Appendix of the "Divine Worship, The Missal" of the Ordinariate which has recovered so many elements of the Extraordinary Form except for Latin. Instead a modified older usage of English is incorporated, a sort of "sacral" English.

These are the 6 Appendices at the back of the Ordinariate's Divine Worship the Missal and easily brought to our normal Ordinary Form Mass.

APPENDIX ONE: Prayers at the Foot of the Altar is an option which includes the double traditional form of the Confiteor allowed in English and as the Introit is chanted.

APPENDIX TWO:  The Rite of Sprinkling Holy Water is celebrated by using already Blessed Water, and as a prelude to the Mass which the priest wearing the cope and is exactly as it is in the Extraordinary Form but in English. After its final prayer, the priest changes into the chasuble the Introit is sung (this presumes the omission of the Prayers at the Foot of the Altar, a common sense reform when the Rite of Sprinkling is used as an option).

APPENDIX THREE: The Last Gospel is rectied after the Dismissal

Within the Missal, The Introit with its traditional format, including the Gloria Patri is printed as well as the Offertory and Communion antiphons.

The Gradual/Tract is clearly printed in the Missal and encouraged (It is allowed currently in the Ordinary Form, yet no one uses it that I am aware of).

There are double genuflections at each consecration in both canons as well as the kissing of the altar in the middle of the first sentence of the Roman Canon and any time when the priest turns from the altar to face the congregation, which presumes an ad orientem stance.

The priest genuflects after the "Great Amen."

The "Lord I am not worthy" is recited three times.

Kneeling for Holy Communion and receiving on the tongue.

The Roman Canon or any other allowed canon to be exclusively in Latin and prayed in a low voice.

Of course, this Mass could be offered entirely in Latin as is already the case with the Ordinary Form (I have a large Latin Roman Missal for the altar for such occasions), but Cardinal Sarah seeks some required Latin which I would venture to guess would be the Gloria, Credo, Sanctus, Canon, Pater Noster.---that would be plenty, no?

One of the interesting differences between the EF and OF is how fast the consecration comes in the EF. The priest does not wait for the Sanctus to be sung, but proceeds immediately to "say" the Canon. Often, just as the Sanctus is finished being sung, the bells sound to alert everyone of the coming of the most sacred moment of the Mass, the consecration which occurs moments later. This raises the issue of why the Roman Canon is avoided so much in the NO, since it is very long especially if it is recited slowly for everyone to hear, while in the EF it effectively appears much shorter for the people.

Wonderful...but when will the talking end? That is, for decades, there has been endless talk from Churchmen about the need to restore sanity to the Roman Liturgy (Novus Ordo) which almost everywhere, by numerous accounts, throughout the Latin Church is in a state of collapse.

During a 2013 A.D. press conference, even His Holiness Pope Francis offered the following:

"Once, speaking of the Western Church, of Western Europe, especially the Church that has grown most, they said this phrase to me: “Lux ex oriente, ex occidente luxus.”

"Instead you keep this beauty of God at the center, the reference. When one reads Dostoyevsky – I believe that for us all he must be an author to read and reread, because he has wisdom – one perceives what the Russian spirit is, the Eastern spirit. It’s something that will do us so much good.

"We are in need of this renewal, of this fresh air of the East, of this light of the East. John Paul II wrote it in his Letter. But so many times the luxus of the West makes us lose the horizon."

Dear Churchmen...stop talking...take action. Do something other than offer talks. Just repair the collapsed condition of Latin Church liturgy. Come on.

With regard to Latin usage, I would also include the Confiteor as well as the Ecce Agnus Dei, both significant parts that are said by the people.

Ad Orientem should be required and the high altar restored. Aside from the elevations, it is difficult to see/participate much beyond watching the priest reading from the missal, being perturbed by exaggerated orans postures (excluding the posture employed by the Dominicans) and consuming the consecrated host/precious blood and at times, that consumption is totally undignified. We should all be unified in prayer from one side of the altar. Currently, I'm reminded of going into a store where the salesperson and customer interact from their respective sides of the counter.

At the end of the day, one should be able to attend mass in either form where differences are limited to minor details. The chasm that exists between the two forms should be closed or, the addition of these types of appendicies, though beneficial, will be less impactful from the perspective of re-establishing continuity.

Last, just do it. Stop talking about it. Don't form a commission to study it for years on end. Had the changes envisioned by the counsel actually been implemented, the people would have been at peace and the experienced upheaval limited to non-existent. Just do it already.

In case you haven't noticed Pope Francis never genuflect during the Mass so I highly doubt he would restore the double genuflection. Francis has also allowed others to teach in his name that receiving the Eucharist in the state of grace is no longer an absolute. The Eucharist isn't for the perfect....ok. So I really really doubt that a pope who has done the incredible damage to the office of the papacy, the sacraments of the Eucharist, Pennance, Marriage and the Priesthood like Francis has done gives a dam about fixing liturgical problems. I mean he hasn't even abolished priestly celibacy yet or concelebrated publicly with a Protestant yet. Well I'm not including Kasper, Daneels or Wuerl, Spadaro or Marx in that last one.

Wait, why would we have to have the Prayers at the Foot of the Altar OR the Right of Sprinkling? Is out attention span so short that we can't have both? I have to say that I think we should get rid of all the options and have more things made mandatory.

People will fuss about using Latin exclusively in the Roman Canon, but this is a shiny object that obscures the deeper controversy of using sotto voce for the Canon. If the priest is required to use a low voice, it doesn't much matter what language he's using; the congregation won't hear it.

If we are to go down that path, I'd imagine music during the canon would again be normative. If my geography, as it were, is correct, you'd essentially have music from the Orate Fratres straight through to the Lord's Prayer. If we're chanting everything, there would be music or singing from the Orate Fratres to the end of the Agnus Dei, or possibly even to the end of those receiving communion. I could go for that.

RSC+
What you say is interesting. This is one of the big differences in the TLM celebrated before the Council and nowdays when music is involved.
It seems that as time moved more and more into the modern age, people became more and more afraid of silence in a more and more noisy world. Even in the Mass, music is used to cover up the silence. But this is precisely what Cardinal Sarah has been warning us about, that we need Silence in a noisy world. The power of Silence is so great that it casts fear into many people, because it has the power to awaken in them the consciousness of their very being, and can lead to an experience of the mysterium tremendum et fascinans, not something one may be prepared for on a lazy summer morning.

Certainly. As an introverted sort, I appreciate silence more than most. I was imagining music--and here I don't mean hymns, really, but Mozart or other suitable Mass settings--and ad orientem worship as an alternative to syrupy hymns and Father oogling the congregation from behind the altar. I can also see doing the whole thing silently except for the parts that are spoken in a louder or chanted.

I'll admit that the Low Mass of the EF I've seen stateside is a bit much, though, even for me; in Nantes, the congregation says the server's responses, too, and that's a bit closer to what I'm used to seeing coming from an Anglican background.