OH, TO HAVE A YOUNG, TRADITIONALIST, CATHOLIC POPE, BUT MAYBE NOT THIS ONE

After all it is fiction but do viewers of drama have the good sense to distinguish between fiction and truth. The show is silly but nicely filmed and acted. But here is another critique that is more sinister: 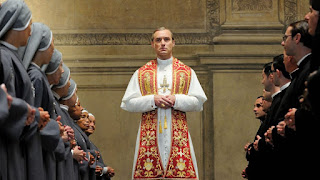 Media Casts 'The Young Pope' As Super-villain For Being Catholic

A long time ago in a decade far, far away, in Catholic high school I was assigned to write a personal obituary. An unholy spirit prompted me to characterize myself as the first American pope, elevated after attracting a sizable number of youths to the one true faith by means of a marketing campaign titled “Christ is my buddy”—this 22 years before George Carlin introduced the Buddy Christ in Kevin Smith’s 1999 simultaneously hilarious and often sacrilegious film “Dogma.” It’s not difficult to conjure the dismayed expression of Sister Diane when she read a high-school poem written by yours truly based on his observations of our small-town parish: The bishop went golfing today While the congregation ...

I watched some of the episodes and it's a bizarre show. A lot of false information disseminated as well. I like Jude Law but this is not one of his better performances

But would it be acceptable to have a show where Muslims are portrayed as villains? Hollywood hypocrisy at work. Bigotry against Catholics- the only acceptable form of bigotry since 1970.

Before Vatican Disaster II Hollywood portrayed Catholicism with great respect: Bells of St. Mary's, Going My Way, etc. Do you think the Democrat Party would be promoting abortion and gay marriage if the Catholic Church today were as powerful as it was before the Council? Dishonest bishops and clerics ignore this because it points to their pathetic leadership.

Good point, but in fairness, the Freemasons had made great strides in undermining the Faith in European and Latin American nations before VCII.

I never understood the fascination with Freemasonry. Kind of a silly organization, something Bugnini would be attracted to for some reason since he lost his faith in God