ABUSE ENCOURGED BY MALIGNANT PASSIVE ENCOURAGEMENT BY THOSE IN LEADERSHIP

Even as a child, I prayed this prayer from one of my prayer books, thus I was made aware that priests came in all sizes and personalities and some were good, bad, indifferent, tepid and down right evil. So when the scandal of abuse in the Church accelerated in the 1970's, liturgical and otherwise, I was not shocked:

O Almighty and Eternal God, look upon the Face of Thy Christ, and for love of Him Who is the eternal High-priest, have pity on Thy priests. Remember, O most compassionate God, that they are but weak and frail human beings. Stir up in them the grace of their vocation which is in them by the imposition of the Bishop's hands. Keep them close to Thee, lest the enemy prevail against them, so that they may never do anything in the slightest degree unworthy of their sublime vocation.

But above all I commend to Thee the priests dearest to me: the priest who baptized me; the priests at whose Masses I assisted and who gave me Thy Body and Blood in Holy Communion; the priests who taught and instructed or helped me and encouraged me; all the priests to whom I am indebted in any other way, particularly (your priest’s name here). O Jesus, keep them all close to Thy heart, and bless them abundantly in time and in eternity. Amen. Mary, Queen of the clergy, pray for us; obtain for us many and holy priests. Amen.

I don't know if there is a connection between the horrifying proliferation of sexual abuse of the vulnerable in the Church by clergy and their supervisors who encouraged it by a nod and a wink or rewarded it with months of useless therapy to overcome it, but liturgical abuse went on steroids after Vatican II as did the abuse of minor males by the clergy. Neither were punished by their bishops.

In fact the John Jay College of Criminal Law discovered that 1974 was the year where more priests abused male minors in the Church. There was a heck of a lot of other abuse going on too, especially the raping of beautiful churches by the iconoclastic liturgical elite as well as the horrifying liturgical abuse that often led to the desecration of the Most Holy Eucharist, not only in its sacrificial aspect but in the Species of the Sacrament.

There are two stories of recent interest in this regard, one from almost 100 years ago that Rorate Caeli resurrected and another from Guam where sexual abuse of minors by the chief shepherd, their bishop is being tried by none other than Cardinal Raymond Burke.

In terms of the trial of the bishop, the current administrator of that diocese has order priests to start following the General Instruction of the Current Ordinary Form Missal rather than ad libbing it or making up one's own way of celebrating the Mass. In other words, it appears that not only has sexual abuse be ignored but also liturgical abuse. A connection???? I suspect so.

Then this horrific story from about 100 years ago. Please note how this murdering priest executed for his crimes celebrated the liturgy of the Church--the pre-Vatican II Church at that, thus show that there was some liturgical abuse back then too not to mention other kinds of horrific breaking of priestly promises.

A tale of Mass murder and homicide

On 18 February 1916 a Catholic priest was executed by the state of New York at the Sing Sing prison, the only priest in America to receive the death penalty for a crime. The New York Daily News today did a look back at the story from a century ago.
Father Hans Schmidt was convicted of murder, following an affair he had with a woman. Before he killed her, he also paid for their baby to be aborted. 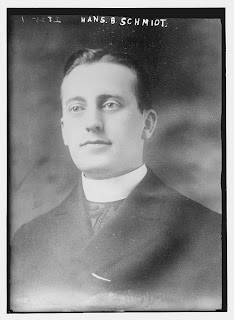 What was especially interesting was this passage from today's article:
"...Schmidt, a 1907 Bavarian emigre, was a square peg who refused to conform to Catholicism's meticulously rounded holes. He altered the church's ritual prayers to suit his eccentricities, and his ceremonies often were a mess of scriptural error."
No further comment is needed.

A certain traditional, conservative priest in the Archdiocese of Seattle fled the country in 2015 after he placed a hidden camera in a boys bathroom and then lied to the police during the investigation.

Yes, all those terrible, horrible abusers come from the progressive, Novus Ordo wing of the Church . . .

This priest sounded like he was mentally ill, big time.

Phew, what a loony! I blame the mother.

His mother, that is.

Traditional Catholics oppose not only child molestation, but all sexual activity that is not between a man and woman who are legitimately married to each other.

Dialogue - And they even oppose some forms of sexual activity between husbands and wives...

Apparently the local bishop didn't transfer him to another parish to hush it up. This also came at a time when anti-Catholic sentiments were very public and anti-German sentiment was equally strong. So the temptation to box up Fr. Schmidt and send him to another place, far, far, away would have been overwhelming.

When I see or hear of liturgical abuse I know something evil is lurking nearby, either as a motivator or as an opportunist.

I don't see *real* traditionalists claiming that the olden days were perfect or sin-free. In fact the really hard core traditionalists can recite details of Church history and sinful clergy that will curl your hair. They will then tell you that, just as with all morality plays, that the deviation from the Church teachings was the departure point. Progressives will claim no such link with the loss of Catholics to false religions and widespread abuse of children as the result of selling out the liturgy to modern times.

It is good to both pray for the soul of Fr. Schmidt and to tie the noose well.

I concur. I am a victim of spiritual abuse caused by a myriad of priests committing liturgical abuses and causing me untold anguish. I am putting my list of abusers together right now. I may sue!

Most OF's I attend are too sterile and boring to cause anguish...only disgust. I imagine I am at the manger in Bethlehem and the Wisemen come in wearing Braves caps and Grateful Dead t's, then toss the gold, myrhh and incense to Joseph, saying, "Hey, Dude, here's your kid's stuff."

Henry, I think you are on to something. The lowering of expectations for everyone in the Church, laity and religious, has also lowered our resistance and resiliance. After communion I frequently read St Augustin's prayer where he admits that he is a sinner with a frequent flier card. He tries and fails and is grateful for the forgiveness. St Bonaventure pairs nicely with it wherein he admits failure is assured without the help of the God he desires to please. Nowadays we try to excuse the behaviour of Fr Schmidt as the pressure of celebacy or being open minded to 'alternative' relationships. The woman might even have been referred to Planned Parenthood by a nun sympathetic to her plight. We have played with fire and it is burning us.


Yes, that's true. Every such act must be open to conception. But those persons whose pride drives them to abhor Church teaching can easily find another religion to suit their lustful tastes.

God will give them their just desserts.

The higher their eminence, the greater their punishment.