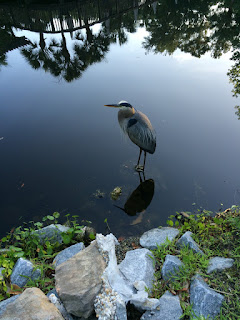 I am on my weeklong winter vacation in a far off island. Thus I attended the Vigil for Sunday and like the Diocese of Savannah the diocese in which I am vacationing is having their kick-off of their Bishop's Annual Appeal.

Like my diocese, this diocese has a video presentation from the bishop on his requests which is shown during the homily time after a brief introduction by the celebrant.

I always have anxiety attacks that when I show our video, that the dang thing won't work.

But I have never had this anxiety!

After the celebrant gave the brief inroduction to the video, the person in charge of turning it on was having some trouble and it a took a little bit of time for something to appear on the screen.

What appeared on the screen? Law and Order, that is an episode of the NBC crime drama, Law and Order! At first we all thought it was the video but soon we knew that this was a big glitch!

Fortunately, what we were treated to didn't have any racy scenes, but oh what we could have seen given today's amoral standards for television shows.

Now, I will not only have anxieties about if my video equipment will fail when I show the Bishop's appeal but some ungodly video will be in the machine!

There was no explanation from the pulpit how in the name of God and all that is holy that a Law and Order video was in the video player rather than the Bishop's video. Did the diocese make a mistake or did someone try to be funny at this parish and pull a prank? And what is the mentality toward Catholic reverence if someone thought this would be funny at Mass?

And in a church that seats about 1,500 people, few were amused or laughing.  The visiting priest though, did a good job of summing up the Bishop's appeal extemporaneously! God bless him.
Posted by Fr. Allan J. McDonald at Sunday, February 19, 2017

How nice. It is so edifying to see that some many Catholics take their Faith so seriously. God forbid that the celebration of the Holy Sacrifice of the Mass be sober, dignified and prayerful. If the message from the bishop is all that important then why not have it set up in the gym and invite people over to see it, discuss it and get to know each other. And for those who don't care to go and see the video have a bulletin insert for them to read. But I guess all of those suggestions involve REAL caring and preparation. So let's just F up the Mass as usual. Boy the fruits of that Council just keep falling off that tree.

The whole use of audio visual technology at Mass smacks of amateurishness. I have never seen it that it didnt seem out of place and inappropriate. Our priest simply stated, in his jolly Midwestern way, that we don't do that here and then read bits from the letter and explained the goals of the appeal.

In a previous parish we had Martin Sheen send his recorded appeal. He is a local boy who still holds some sway.

Why not set it up in the gym? Because Catholic are lazy and won't walk 50 yards to hear a message from their bishop, about school tuition, to buy donuts from the youth group or cookies from the girl scouts, that's why.

And if you think they read bulletin inserts and act on them, then you have little experience of the relationship between Catholics and their church bulletins.

Please, don't give them any ideas!!!

Father McDonald, you might enjoy watching this report:
https://youtu.be/CHmX8IZbpxs

Given the same old dog and pony show about the needs of the diocese and how compassionate everyone at the top is, I think I'd rather watch Law and order.

As Catholics, we follow our bishops. It seems perfectly reasonable for bishops to use modern means to communicate their instructions to the whole flock. As for the error in this case, someone needs to be fired or removed as a volunteer.

We had an audio last week at my Atlanta parish, at the end of which the archbishop asks the parishioners to follow the instructions of their pastor (even when he is not celebrating Mass, as our has not been recently because of ill health) and fill out their pledge cards. While we hear what the "goal" is in terms of what the parish raises for the annual appeal, it is not really a goal but a "demand"---raise it or else the archbishop will get it anyway from the parish collection. When did dioceses start doing these appeals? I don't remember them growing up.

We are obliged to respect the office of bishop.

However, I think it would be hard to think of a time in the last century when the church had as many weak, corrupt or just plain lousy bishops as we do now. The 2002 sex abuse scandal has still not been justly resolved because too many powerful men in the USCCB protected their own and until we get a new breed of bishop, it will continue. Recent appointments by the pope indicate that such a change isn't coming any time soon.

So we must continue to respect the office that is held by men who are very hard to respect. Maybe quietly suffering unjustly while our Church is dismantled before our very eyes is the penance God calls us to in our time. But let's be honest: The current situation stinks and writing a check to your diocese isn't going to fix it.

Some of those bishops should have gone to the slammer. Not reporting alleged sexual abuse of a minor is a crime, period.

Well anonymous at 1011, give us some specific examples of bad or lousy prelates? The process is so secret for selecting them, the public never really knows what was the criteria in selecting ABC for XYZ Diocese. When I war growing up, Atlanta's second archbishop was Thomas Donnellan, who had served as bishop of some diocese of upstate New York. I don't think he had ever stepped foot in Atlanta in the 54 years of his life before he came here.

I know we are not congregational in government, nor should we be, but it seems like an inordinate amount of our parish money---maybe a third---leaves the parish for the diocesan office in one way or another---school subsidies, seminaries, whatever. Perhaps why eyes gaze over when we hear about our annual appeal up here in north Georgia. I don't think you see as high a percentage of parish funds going to the bishop's office in the Episcopal Church. I have supported our one up here in Atlanta, and its worthwhile causes, but I'd be more enthusiastic if it were a "goal" and not a "demand."

Lastly, I'll say that if you are looking for examples, you don't have to go far to find them.

Draw your own conclusions.

Anonymous, you can be for "social justice" and stand by traditional moral teachings at the same time---they are not mutually exclusive. Sometimes "shouting the loudest" doesn't convert many people and can backfire. Our bishop here in Atlanta does speak on social justice---especially the touchy issue of immigration---but that hardly means he embraces abortion on demand.

Yes, one can be for social justice and stand by traditional teachings at the same time. In fact, I would go so far as to say that they cannot possibly be mutually exclusive for a true Catholic. No organization stands for social justice the way the Church does.

However, too many bishops, WAY too many, hit their wall with the social justice and can't seem to bring in the traditional teachings and morality to their realm of thinking. What immediately comes to mind is a well-known archbishop being told in a public forum that someone is a homosexual and applauding that person. Perhaps he wanted to assure the person that the Church doesn't hate gay people, which is fine. But to applaud it? That sends a very, very wrong and dangerous message and that message was picked up all over the Catholic side of the internet.

The term "social justice" is a non-Biblical and theologically meaningless term. I wish the Church had never used it. There is only one justice in Holy Scripture, and that is God's justice...spoken of by Amos and Incarnate in Jesus Christ. Surely, no one believes that the justice spoken of by Amos is the same justice meted out by the courts or reflected in the frequent idiocies and failures of Congress. Sometimes the Church is a little weak on Biblical theology as it intersects culture.

Social justice = use government coercion to steal from the productive and give to the non-productive. I don't recall where Jesus advocated this? I thought charity was something done on an individual basis.