THE COMMON CHALICE AND THE SPREAD OF DISEASE REDUX 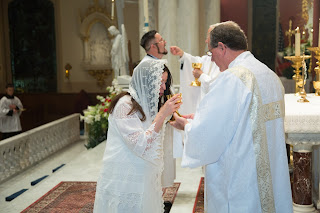 While the article I link below does not deal with the transmission of Hepatitis C, which can only be transferred by blood to blood contact, it does indicate that disease can be spread from the common chalice. This was made explicit during the H1N2 crisis years back when the common chalice was banned by bishops.

I would be more concerned about those who consume what remains in a chalice as well as drinks the ablutions, like the priest celebrant.

We know that if someone has bleeding gums or mouth sores that are bleeding, even in a small amount, it is possible blood can remain on the chalice or in the dregs at the end of the last person receiving. If the person who drinks the dregs has bleeding gums or mouth sores then Hep C could be transmitted. The hep c virus can live for four days on the surface of anything. Again, it is only blood to blood contact that Hep C can be transmitted.

Many people who have Hep C don't know they have it because they have no symptoms for upwards to more than 30 years! When they discover they have it, or have gotten rid of it on their own, they do not know how they got it because they have not done anything risky in terms of blood to blood contact. So who knows how many may have contracted Hep C from the common chalice, if only a small number.

Even if it is rare that one contact any virus shouldn't the Church take an abundance of caution in an optional ritual of drinking from the common chalice, especially those responsible for the ablutions, normally a priest or deacon in terms of blood to blood contact in the mouth?

Holy Communion is a Christian practice that consists of a group gathered to share bread and wine from a minister or priest.18 The wine is frequently shared from a cup or by dipping the bread into wine, a practice called intinction. After each participant drinks from the cup, the minister wipes the rim prior to the next communicant drinking from the cup. Also, in some churches, communion wafers are placed into the cup containing wine, and a spoon (known as a cochlear) is used to retrieve a communion wafer from the chalice and placed into the recipient's mouth. The common spoon is not wiped between recipients.
The capability of the chalice to spread infection has been debated in the medical literature since the 19th century when Forbes and Anders hypothesized that contamination from the mouth may lead to bacteria in the wine.19Since then four experimental studies, a review, and several opinion pieces including one from the CDC have been published that discuss the infection risk of the chalice.
The risk of infection depends on several factors including the bacterial or viral load in the communicants’ saliva, the ability of the organism to withstand the antimicrobial properties of the gold/silver chalice and the alcohol content of the wine, the linen cloth used to wipe the rim, and the recipient's ability to destroy any pathogenic organism. Examples of potential pathogens are those that are transmitted via saliva, oral/labial skin lesions, fecal-orally, or droplet and airborne routes.18, 19, 20, 21, 22, 23 and 24
In 1946 Burrows demonstrated that when human volunteers shared a communion cup, with instructions to get as much saliva as possible on the rim, bacteria were recovered in small numbers.18 In 1967 Gregory showed that in a more realistic simulation of a communion service, various species of bacteria could be recovered from the cup, including staphylococci, Neisseria species, beta-hemolytic and non-hemolytic streptococci, and Micrococcusspecies.18 In 1967 Hobbs and colleagues performed experiments that concluded that silver and wine may have antimicrobial properties. However, the time interval between each communicant drinking from the cup, which is typically less than five seconds, is not sufficient to cause a significant decrease in bacterial counts. They also found that rotating the chalice was ineffective at decreasing colonization; however wiping the rim with the linen cloth decreased bacterial counts by 90%. All studies concluded that the risk of spreading disease cannot be excluded but is extremely low.19
In 1993 Furlow and Dougherty swabbed silver and pottery chalices before and after eight services. They cultured potentially pathogenic organisms, such as Staphylococcus aureus, Haemophilus parainfluenzae, and Moraxella catarrhalis. They concluded that individual cups (challicles) should be used to eliminate infection risk.20
Finally, in 1998 the CDC reported there had never been an outbreak of infection related to the communion cup.23They referenced a study from 1997 in which 681 participants who drank daily from a common cup were at no higher risk of infection than those who participated less frequently or who completely abstained from Christian services. They concluded that it is probably safe to participate in services where a common cup is used, with the caveat that any member of the congregation with active respiratory illness or open labial or mouth sores abstain from partaking.23
In conclusion, there is experimental evidence suggesting that sharing a communion cup contaminates the wine and cup. However, there has never been a documented case of illness caused by sharing a chalice reported in the literature.
Posted by Fr. Allan J. McDonald at Saturday, February 04, 2017

The usual suspects will race here to post that this is not true. My point is totally different. I recall there is papal legislation which indicates that offering the chalice of Christ's sacred blood is not supposed to be a routine event. It would also eliminate the army of priests wannabees flooding the sanctuary every Sunday.

My (ordinary diocesan) parish has never had communion from the chalice as a regular everyday practice--only on special occasions. Nor does it have armies of extraordinary ministers. A case of causual correlation, the main reason for regular communion from the chalice obviously being to justify ordinary use of so-called extraordinary ministers, largely female.

"They concluded that it is probably safe to participate in services where a common cup is used, with the caveat that any member of the congregation with active respiratory illness or open labial or mouth sores abstain from partaking."

As with touching doorknobs, shaking hands at a business meeting, drinking from a public water fountain, etc., the common cup presents no significant danger.

"In conclusion, there is experimental evidence suggesting that sharing a communion cup contaminates the wine and cup."

Of course it does. No one ever suggested otherwise. Keep in mind, however, that every bit of food or drink you consume is also contaminated. From the FDA guidelines:

Ground Paprika ALLOWED: up to 75 insect fragments per 25 grams

Canned Fruit
Juice ALLOWED: up to 5 Drosophila or other fly eggs per 250 ml

Oregano ALLOWED: up to 1mg of mammaliam excreta per pound.

"However, there has never been a documented case of illness caused by sharing a chalice reported in the literature."

And there's the information that sensible people understand. CAN one get a horrible disease and DIE from the common cup? Sure. Is there any reasonable cause for fearing this or letting this control our communion practices? No.

Father Kavanaugh, I knew you would arrive to hyperventilate over this silly practice. You never disappoint.

I have NEVER taken the Sacred Blood from a Chalice and its been almost 60 years since I made my First Holy Communion. Just another unnecessary practice which adds nothing since we receive our Lord fully and completely through the Sacred Body via the Host. I also have NEVER grabbed the Host with my paws but insist on the traditional, inveterate practice of receiving the Body of Christ on the tongue.

We mustn't overlook the spiritual value of sharing the saliva that accumulates in a shared vessel. It becomes a symbol of our fraternal communion. For this reason, perhaps the Rite of Peace should include mouth-to-mouth kissing. I have lots of great ideas like these.

I figured it wouldn't be too long before Kavanaugh would be knocking people down to get to his computer and respond to this one. Now, ask yourself why it is that Kavanaugh is so insistent upon people taking the common chalice...or receiving in two kinds at all.

Paws? You have PAWS?

If you have paws, is there drool splatter all over your computer screen too?

This picture is too disturbing.

"So that the fullness of the sign may be made more clearly evident to the faithful in the course of the Eucharistic banquet, lay members of Christ’s faithful, too, are admitted to Communion under both kinds, in the cases set forth in the liturgical books, preceded and continually accompanied by proper catechesis regarding the dogmatic principles on this matter laid down by the Ecumenical Council of Trent."

"The purpose, then, of receiving Holy Communion under both kinds, is not that the faithful receive more grace than when they receive it under one kind alone, but that the faithful are enabled to appreciate vividly the value of the sign."

"'The Roman Missal points out, “Holy Communion has a fuller form as a sign when it takes place under both kinds.'"

INTINCTION FULFILLS ALL THAT YOU QUOTE IN A SANITARY COMMON SENSE WAY NOT JEOPARDIZING ANYONE'S HEALTH AND LIFE NO MATTER HOW INSIGNIFICANT THE NUMBER WHO ARE VICTIMS OF DISEASE CAUGHT FROM THE COMMON CHALICE.

As for me and my house, we will stand with the Lord and the Church who have given us today's Prayer After Communion:

O God, who have willed that we be partakers
in the one Bread and the one Chalice,
grant us, we pray, so to live,
that, made one in Christ,
we may joyfully bear fruit
for the salvation of the world.
Through Christ our Lord.

Lex Orandi and all that...

What is a greater sign of this unity than the Sacred Host and Precious Blood administered as one via intinction? After all, it's not as if one species is exclusively His Blood, and the other exclusively His Flesh.

Dialogue - The greater sign is both partaking of the one Bread and the one Chalice.

And partaking in these "greater signs" is contemporaneous with the collapse in belief in the Real Presence (may I dare say "Transubstantiation") among American Catholics. We were doing much better from a belief perspective when we approached the Commmunion railing with awe.

If you want to look at collapse in belief in the Real Presence and other assorted but related collapses, look no further than:

THE RISE OF DIVORCE AND SEPARATION IN THE UNITED STATES, 1880–1990, STEVEN RUGGLES

"Marital dissolution for reasons other than widowhood has increased dramatically over the course of the past century. Only about 5% of marriages contracted in 1867 ended in divorce, but over one-half of marriages contracted in 1967 are expected to end in divorce (Cherlin 1992; Preston and MacDonald 1979). Scholars and commentators have consistently explained this change as a product of the changing sexual division of labor. Writing in 1893, Durkheim (1960 [1893]) pointed to the sexual division of labor as a source of interdependence between men and women, producing what he called “organic solidarity.” Durkheim warned that if the sexual division of labor receded, “conjugal society would eventually subsist in sexual relations preeminently ephemeral” (p. 60). Fifty-six years later, Parsons (1949) expanded on this theme, maintaining that sex-role segregation prevents disruptive competition between husbands and wives. The argument was formalized by Becker (1981), whose economic model assumed that the chief benefit of marriage arises from the interdependence of men and women, which in turn results from the specialization of women in domestic production and men in market work. The model predicts that when women obtain another source of income (either by market labor or through welfare) the incentive to remain married declines."

No one wants to come to the defense of the new praxis and assert the new praxis has resulted in a new Catholic spring, renewed belief in the Real Presence, and Mass attendance going through the roof?