NOW MANY PEOPLE THINK THAT I AM CLAIRVOYANT AND I'M BEGINNING TO THINK THEY ARE RIGHT!

This is a Solemn Concelebrated Mass in the Ordinary Form by the Bishop of Birmingham, Alabama (leave it up to us southerners, the agents for true renewal in the Catholic Church in the USA). Father Z opines the following:

This morning EWTN televised Mass celebrated by the ordinary, Bishop Robert Baker, at the Shrine of the Most Blessed Sacrament in Hanceville, Alabama. The occasion was the 50th Anniversary of the founding of the community of Poor Clares (Mother Angelica’s order) in Birmingham. Of particular note is that Bishop Baker celebrated the Novus Ordo Mass ad orientem. This is standard practice at the Shrine, but the fact that it was televised globally makes it newsworthy, especially given the whole EWTN ad orientem debacle some ten years ago. The Mass re-airs on EWTN at noon and midnight ET, if you’re curious to see.

Now, haven't I been declaring that this sort of worship is the wave of the future? Haven't I? And I suspect, but would like to know as I don't know now, that Holy Communion was received kneeling? 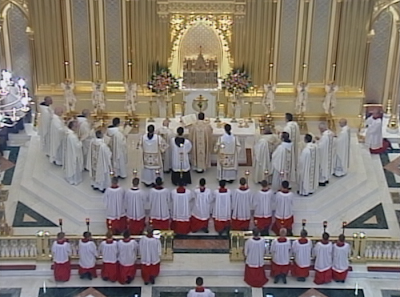 My comments: There is no doubt that in this style of Mass, even if all vernacular, there is a great continuity between it and the Extraordinary Form. I cannot imagine a bishop anywhere in this country celebrating the Ordinary Form of the Mass in this fashion ten years ago. We have to thank our Holy Father, Pope Benedict XVI for his strong prayer and desire to bring inner healing to the heart of the Church between that which is pre-Vatican II and that which is Post-Vatican II. Thank God that being called "pre-Vatican II" is no longer an insult intended by those who saw Vatican II as some sort of rupture with our Catholic past and that only those who embraced the spirit of rupture were with it in the Church all others neanderthals. How silly and how divisive was that!

I remember reading about the ad orientem flap with the previous bishop in Raymond Arroyo's book several years ago. It really bothered me that the bishop not only wouldn't celebrate the Shrine's dedication Mass ad orientem but he saw to it that ad orientem Novus Ordo Masses would not be broadcast as well (a kind of ecclesiastical censorship to suppress the potential spread of a legitimate liturgical practice).

This is the kind of thing that had caused a lot of hurt feelings and suspicion among Catholics of a traditionalist bent toward bishops in general. I hate to say it, but, for a long time we had almost come to expect the worst out of them (when it came to having a progressivist attitude on liturgy) until certain of them would do something concrete (like Bishops Slattery and Sample) to demonstrate otherwise.

Back to the EWTN story, as I recall, this is the reason the EWTN Masses have continued to be broadcast from the smaller chapel in Birmingham rather than from the Shrine at Hanceville (because the Shrine Masses, are, as I recall reading, ad orientem, at least in the main church).

I'm glad Mother Angelica has lived to see this--she has done a lot of good for the Church in the U.S. as well as around the world. I hope a lot of other U.S. Bishops will now follow suit in implementing this liturgical practice!

EWTN was one of the things that gave hope to Catholics like myself in the era before Pope Benedict and his ad orientem Sistine Chapel Masses and Summorum Pontificum.

For some reason, I knew that you will be blogging about this when I watched it this morning at 9!! I love it!!

A friend and classmate of mine in DC, who is a young Dominican priest and working on his DMA in sacred music, routinely celebrates the Novus Ordo facing the liturgical East and in Latin. Tradition perseveres!

As for communion received kneeling, it is never received any other way at the Shrine, nor is Mass ever celebrated except ad orientem and much Gregorian chant. My post at Father Z's:

Not only did Bishop Baker celebrate this televised OF Mass ad orientem and with gorgeous brocade vestiture and great solemnity, beautiful sacred music, lots of incense, Greek Kyrie, Sanctus and Agnus Dei in Latin Gregorian chant, Roman canon, no handshakes of peace, communion on the tongue by all kneeling at the altar rail with hands under the houseling cloth, etc.

This is how the Mass is celebrated seven days a week at the Shrine, except with a good deal more Latin. I cannot think of a more effective support of Pope Benedict’s reform of the reform than offering this Mass on world-wide EWTN daily.

Of course, the Shrine was designed precisely as a home for not only the nuns but also the televised EWTN daily Mass. But too long ago, someone at EWTN said that the famous television ban is still in effect. I suspect there still is considerable pressure from without, as was brought to bear on Bishop Foley (Bishop Baker’s predecessor) a dozen years ago. (It might be mentioned that in retirement Bishop Foley is the go to celebrant of the TLM in Birmingham.) Let us hope that this first televising of Holy Mass as it is celebrated at Mother Angelica’s Shrine is a harbinger of change to come.

Frankly I usually hate seeing concelebrated Masses with tons of priests up at an altar, but when it's done ad orientem, it just looks so, well, right. For lack of a better word.

It is becoming increasingly conspicuous that ad orientem is the proper eschatalogical orientation--for that is what a Church is, a physical eschatalogical foretaste of Heaven and not some stupid houst like liberals would have us think--for the sacred liturgy, and that altar rails are an essential part of church architecture.

It makes me want to bash my head on a sharp corner when someone claims it's "offensive" to celebrate Mass ad orientem and to have an altar rail. It really just blows my mind how truly and irretrievably self-centered some people--Catholics of all people!--are.

The versus populum movement, perhaps with exceptions like St. Peter's where the massive nature of the church diminishes this and is original to the building and was done for a reason (it would have been unthinkable to build an altar facing away from the tomb of Peter in the 17th Century), is fueled by closeted selfishness and a drive toward self-worship. You can dress the argument up however you like, but this is essentially what it comes down to. And the incessant moaning about altar rails is part of the same problem.

What hurts very badly is when a new church is built extraordinarily beautifully, but then it is ruined with an Ikea altar shoved in the middle of a transept crossing and with no rail. It's like having a beautiful red Ferrari but with no seats and the engine of a Pinto. And the other thing that bugs me to no avail is this obsession with three-sided seating arrangements. Again, this ruins the eschatalogical one-directional emphasis on the liturgy.

Christian worship is not cyclical, it is not omni-directional. The direction comes from one point (Earth), and is pointed to one point (Heaven). Seating coming from several directions, even if the church is cruciform, is ruinous and is barely better than a junky fan-shaped church-in-the-round.

PS: The Sisters get it, obviously.

In watching the Mass I noticed something--where are the "altar girls" and why are the altar boys wearing those ("controversial" and reserved to clerics which clerics never wear except in theory or in Rome) cassocks and surplices? Could this also be part of this model for OF liturgy for the future?

Joseph Johnson, only a matter of time!

Interestingly I was having a conversation with a Franciscan brother the other day and he told me that throughout history, almost all real heresies started on the right, not the left.

His reasoning is that the left has no inkling of the truth usually, while the right has a lot of it. And then some overzealous priests and bishops on the right take their truth and mess it all up, resulting in a heresy.

And his overall point was that whenever some nuttiness starts on the left, it usually dies out in two generations or so. And he immediately connected this with what happened after Vatican II and the recovery mode situation we are currently in.

I'm not sure if I buy all of it, but he has good points about tradition always winning out against liberality throughout history.

ytc, You nailed it with your "eschatological orientation" comment. The entire Mass is an eschatological moment...Christ draws us toward Him even as He meets us in the Mass. The Priest faces toward the Eschatological East because he is offering the Sacrifice to the Risen Lord who comes from the East...which is more than a compass point...it represents the beginning of God's initiative in Creation and the consummation of that initiative in our Redemption and His return. We say the Priest is "in persona Christi" because God's initiative is renewed and continued in the Priest in every Sacramental act, especially the Mass.
The key word here is God's initiative. The Mass is not about human initiative or human self-expression. We are there in obedience and humility, in praise and expectation. The Mass is about us in only one respect...that we are sinners redeemed by Christ and
renewed by His Presence in the Sacrifice. Our presence there points to Him and nowhere else. That's why we face East. How could a whole gaggle of Cardinals, Bishops, theologians and a Pope or two miss that? Go figure...