UNFORTUNATELY, ACTS OF THIS KIND ARE NOT UNCOMMON TODAY!

If this works, that is, you can see the you-tube video from my blog and planted there by little old me, well, I thank Miss Ellen E. who left the very simple directions that I could actually follow on the comment site of a previous blog! I am most grateful and besides myself that I can do this. But sadly, my first pasted video shows the total disrespect for the Holy Eucharist that is described in this post!


Do you think that someone is likely to take the host and give it to someone else in the pew or elsewhere by this method of receiving our Lord, a method that most Catholics of the Latin Rite used for over 1500 years? Duh! 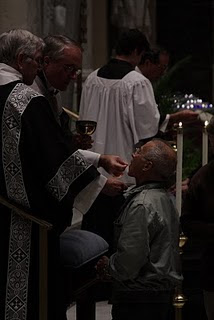 This act of disrespect toward the Holy Eucharist, i.e. the Real Presence of the Body, Blood, Soul and Divinity of the Savior of the World,(in the article below these comments of mine) happened in Costa Rica, but it also happens in almost every city in the world where Communion in the Hand is permitted. In all the parishes that I have been a priest, the laity have reported to me, or I have been able to see by mine own eyes, people taking the host (not receiving) breaking part of it off, giving it to a small child or bringing it back to someone else in the pew. As recently as last week, a parishioner told me that a person placed the host in their pocket not knowing what to do with it and fortunately this lay person demanded that the Host be given to her and the person complied and my parishioner consumed it. Thank you! In Augusta where there is a known "Satanic Cult" and have sacrificed cats on the Church property there, an unusual looking young man was the first to make his way to receive Holy Communion, snatched the Host and ran out of the Church pursued by ushers but the ushers were unable to get to him. So there is a problem my friends in Christ. I know that as I distribute Holy Communion, that those who receive in the hand do not always place the host in their mouth in front of me, but walk off and place the host in their mouth. It is difficult for me to notice those who simply walk off with it. I do believe this is a cause for concern, not that the Lord can't take care of Himself, certainly He will, but that we are permitting a practice that can easily lead to an abuse of the Most Holy Eucharist, an abuse that is so disturbing to our faith, as it should be.

I should also say, that I have catechized often on the proper way to receive Holy Communion in the hand, that one must place the Host in their mouth prior to departing the one who offered them the Host. But in our parish, we have many visitors including non-Catholics, Protestants and others of no faith at all. They simply don't know what to do when they come forward, thinking they should do something. Sometimes we can tell who is befuddled about what to do and we don't allow them to receive. At other times, they get by.

In addition to this, many Catholics now only come to Church a few times a year and no matter what their state of holiness or lack thereof, they proudly present themselves for Holy Communion but still seem to be at a loss as to what to do with it once they receive in the hand. They grab the host, they cup their hands, they do weird devotional practices. I had one person actually take the host from me with his thumb and index finger, stood to the side of me, elevated the host for him to adore, broke it in half and then consumed it, at least to the side of me where I could watch the spectacle. I did not know who he was. I intended to speak to him after Mass about it, but I was told by someone else that as soon as he received our Lord, he was out the door! I guess he wanted to avoid the parking lot rush!

Catholics in Costa Rica outraged by disrespect toward Eucharist

San Jose, Calif., Feb 12, 2010 / 07:08 pm (CNA).- Catholics in Costa Rica continue to express disgust following the actions of Deborah Formal, the girlfriend of presidential candidate Otto Guevara. Last Sunday, Formal broke off a piece of the Eucharist and placed it in her boyfriend's pocket.

The Costa Rican media has continued to air footage of the Mass which shows Formal receiving Communion, bringing a piece of it back to her seat, and giving it to Guevara.

Being divorced, Guevara did not present himself for Communion.

“It was never my intention to disrespect the Catholic Church,” she said.

Formal is seen receiving Communion in the hand, consuming a portion and carrying what was left back to her pew, where she leaned over and put it into Guevara’s shirt pocket.

“I tried to do something that would allow Otto to carry a part of God in his heart,” Formal explained.

After priests were notified of Formal's actions, they asked the presidential candidate to return the consecrated host. He returned it and it was immediately consumed by one of the concelebrating priests.

Numerous Catholics interviewed by the media expressed outrage over the actions of Formal, saying she displayed not only ignorance in describing the consecrated host as a “blessing” instead of as the Real Presence of Christ, but also complete disrespect for Communion and for the Eucharistic Host.

Perhaps we could put in the bulletin an announcement: "Only Catholics in a State of Grace are inited to receive Holy Communion. No morons, please."

Then there are those occasioned by people who have decided that the Sacrament of Reconciliation is not for them. Every week at Mass, I marvel as pew after pew completely empties as people join the queue for Communion. As one whose sins frequently prevent him from going to Communion until after I have partaken in the Sacrament of Reconciliation, I'm usually left in splendid isolation all by myself in the pews as every other soul makes his or her way forward to the altar, sometimes amid sideways glances which say "what is your problem!?"

Am I the only serious sinner in Church?


However, I can't help but feel that short lines at Confession + long lines at Communion = sacrilegious Communions.

Years ago, people attending a Mass at which I was also present (but did not see) brought to the Pastor that someone in the congregation, after receiving Holy Communion, brought the Body of Christ to the back of the Church, broke it in half and placed one half in her "husband's" mouth. I use quotes because the couple, although Catholic were living in a non-sacramental relationship (yes, a fact we all knew at the time). I was not privy to the Pastor's handling of the situation, but the scene in Costa Rica reimnds me of how this desecration contiunues to occur. Just very sad!

I have started an online petition to stop communion in the hand.

We will send this along with these kinds of video as evidence to the Holy Father for us to convince him to put an immediate stop to the sacrilege being committed against the Eucharistic Lord.