MAYBE "BLACK CHILDREN ARE ENDANGERED" WOULD HAVE BEEN A BETTER SLOGAN

There is a national controversy concerning the slogan on this "right to life" bill board appearing in Georgia. The article below is from the "secular" press and continues to use the fallacious term "anti-abortion" when describing those who are Pro-life. It is, though, appropriate to call those who are "pro-choice" pro-abortion since what they promote is the choice for abortion, not the life of the human being within his/her mother's womb. Fr.AJM 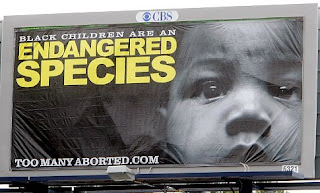 Monday, February 15th 2010, 9:42 AM
This series of billboards have been displayed throughout Georgia as part of an anti-abortion campaign.

A series of anti-abortion billboards targeting the African-Amerian community in Georgia have pro-choice advocates crying foul.

The series of ads, which went up last week, state that "Black children are an endangered species," and promote the website, www.toomanyaborted.com.

"To use racist arguments to try to bait black people to get them to be anti-abortion is just disgusting," said Professor Beverly Guy-Sheftall, who teaches women's history and feminist thought at Spelman College.

"These one-issue approaches that are not about saving the black family or black children, it's just a big distraction," she said.

The billboards, sponsored by Georgia Right to Life, are part of a push to have legislation established in Georgia that would make it a crime to "solicit a woman to have an abortion based on the race or sex of the unborn child."

Black women accounted for the majority of abortions in that state in 2006, even though blacks make up just a third of its population, according to the Centers for Disease Control and Prevention.

"I think [the billboard campaign] is necessary," said Cheryl Sullenger, senior policy adviser for Operation Rescue. "Abortion in the black community is at epidemic proportions. They're not really aware of what's actually going on. If it shocks people ... it should be shocking."

Have you watched the film: maafa21? this documentary shows the clear links to Black Genocide using Planned Parenthood and Margaret Sanger's own words. It is researched from their papers and it is very convincing - even to the pro-abortion skeptic. Watch a clip here: http://www.maafa21.com ( It is over 2 hours long)

Clearly it is meant to shock. A time honored way of getting lots of free publicity for a cause out of proportion to the amount of funds expended in the original effort. One they get the shock out there, it generates attacks against them, and then they will get to defend themselves, and while do so will likely point out that not only in GA, but nationally, Blacks account for a percentage of abortion significantly out of proportion to their demographic percentage; that abortion providers are disproportionately located near black communities; and the Nation's Leading abortion provider (Planned Parenthood) was founded by a woman who openly preached Eugenics and her desire to see minority races suppressed through abortion.

So, is it shocking? Yes, but so is the reality, and therefore I find the shock value justified.

The evil of Margaret Sanger. How these liberals praise her is beyond me, but so is legal abortions.

"We should hire three or four colored ministers, preferably with
social-service backgrounds, and with engaging personalities. The most
successful educational approach to the Negro is through a religious appeal.
We don't want the word to go out that we want to exterminate the Negro
population, and the minister is the man who can straighten out that idea if
it ever occurs to any of their more rebellious members."
-- Margaret Sanger's December 19, 1939 letter to Dr. Clarence Gamble, 255
Adams Street, Milton, Massachusetts. Original source: Sophia Smith
Collection, Smith College, North Hampton, Massachusetts. Also described in
Linda Gordon's Woman's Body, Woman's Right: A Social History of Birth
Control in America . New York: Grossman Publishers, 1976.

Great softballing on the part of the Daily News there. Make the feminist speak to the statistics: "How many abortions are carried out on African-American mothers in relation to all abortions performed?"

It is relevant, and even the hardcore pro aborts can't deny that abortion is being sold to the black community