Sacred Heart Church in Augusta was closed in 1970. It was purchased by a Methodist family in Augusta and turned into a community cultural center. They preserved however, all the windows, statues and altars. The pulpit with its acoustical shell is still there along with the Baptismal font. It can be rented for whatever you wish. It was built by the same Jesuit brother who designed St. Joseph Church in Macon. Sacred Heart is more whimsical and does not have the same quality art work as St. Joseph. Sacred Heart is about six blocks from the Church of the Most Holy Trinity in downtown August, into which its congregation was merged in 1970 along with Immaculate Conception Church.

The exterior is magnificent with the most detailed and unusual brick formations. St. Joseph in Macon has some of the same brick work. 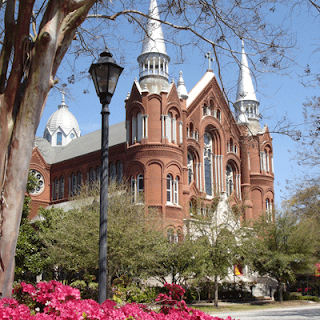 As Sacred Heart Cultural Center looks today, rent it for what you want. 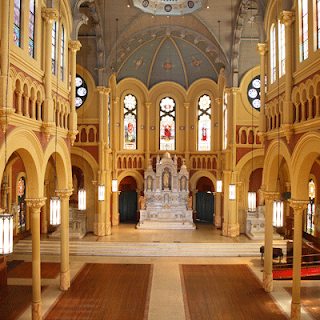 The High Altar, once had the Last Supper in the table part, now at Most Holy Trinity in Augusta. 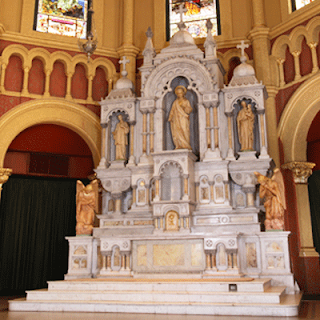 Mayer windows which St. Joseph also has as well as Most Holy Trinity in Augusta. 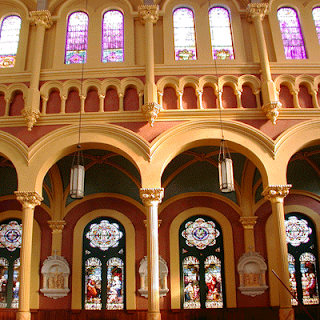 Another wedding party, but all kinds of parties and debauchery are possible. 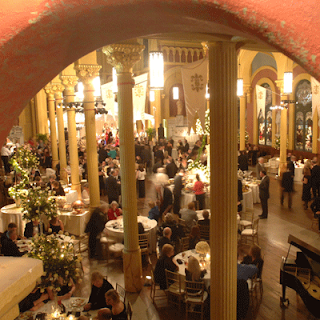 You can rent the cultural center for anything, like weddings and receptions: 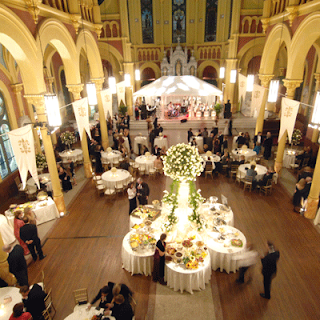 This, along with a few of the Churches highlighted in your blog of Churches you have served, were highlighted in the Southern Cross the week of February 11th! The article describes the marvelous stain glass work found in these Churches.

I drive past this building nearly every day and every time I pass, I say a prayer to the Almighty that it will one day be returned to the use for which it was constructed; Divine worship.

It fills me with sadness to see it standing idle and misused. It's a monument to the religious indifference and apathy of those whose falling away from the faith led to its closure.

But deep inside I just have a feeling.....

Kiwiinamerica, great minds think alike. I drive by it almost every Monday and say the same prayer and that prayer has been said by me ever since 1991 or in fact when it was closed in 1970. It was a shocking decision at the time and still shocks me today as Sacred Heart was the symbol of Catholicism in Augusta and beloved by the whole community--that's why a Methodist bought it and restored it thankfully, otherwise it would have been in complete ruins today.
I have always had a "premonition" that it would return to the Catholic Church one day and I always kidded the new owners, the Knox family, who I know, (a most wonderful and civic minded family) that I wanted them to fully restore it, get all the leaks out and then give it back. At one time the late Peter Knox would have returned it to us and I think freely if it could be used once again as a Catholic Church or Shrine. But Augusta, I mean every Catholic in Augusta, would have to support such a thing--a big budget and a lot of upkeep. A pipe dream I know. Fr. Allan McDonald

Thank you for the information, Father. I'm a relative newcomer to Augusta and I knew nothing of SHC's history. I still remember the first time I saw it. I was new in town and looking for the Catholic Church and as I drove along the Calhoun Expressway, its cupolas stood out from a quite a distance. I thought "ah-haaa that's got to be a Catholic Church!!"

I guess we'll know that the "Reform of the Reform" has really taken a hold when there is a groundswell of support for taking back this treasure. I've never been inside but every time I see it I think "high altar...........Latin........lots of smells and bells!!". I can almost see the Mass being celebrated!

Its still hard to believe that magnificent building was basically given away....it was the heart of Catholicism in Augusta for a long time. I'm told that the Bishop was given poor advice about the price of repair..true?

To WMJACK, I don't know if the bishop was given bad advice. Certainly Most Holy Trinity was easier to maintain, less roof leaking problems and certainly the oldest and most historic. I do think that prior to Bishop Lessard selling the property to the Knox family that he indicated that if Augusta could raise the money, provide a good scenario for its use, he would consider keeping it. However, there was no leadership of any kind, even lay led, that went anywhere with that--which would have been a huge city wide fund raiser, and perhaps using Sacred Heart or even Most Holy Trinity as one parish with two church buildings, one a shrine and one the official parish church--but no one could pull that off and it would have cost mega bucks and Most Holy Trinity alone could not maintain to such large edifices. But the Knox family, and their board of Trustees for the building have pulled it off, because it is within the tradition of Protestantism to do these sorts of things independent of a hierarchical figure. This has good and bad aspects to it of course. Fr. AJM

I visited this social hall many years ago with my good priest friend. I was heart broken then and I remain the same today. How could the Church of Savannah allow such a thing to happen one of its own parishes. I understand that at the time those many years ago, the building needed much upkeep, well look at is now. Someone ELSE loved the building enough to make it look spectacular again. What a loss to the Catholic people of Augusta and to the entire Diocese of Savannah.

How sad, how very sad. It's like it's just waiting for Mass to be back there.

But I am so impressed that a church in Buffalo is going to be dismantled and moved piece by piece to, I think, Atlanta. Well, better than becoming mosques and Buddhist temples.

Gratefully, here in Toronto, we've not had to experiences this.