IT'S THE FIRST LENTEN FRIDAY, CAN I TEMPT YOU?

Yum, yum, yum!
But be forewarned, you will be condemned to the everlasting fires of hell to burn for eternity if you eat meat, chicken, pork and fowl products today. GOD'S WORD® Translation (©1995) Mark 9:48:
"In hell worms that eat the body never die, and the fire is never put out." So as pleasant as this appetizing picture is, looks can be deceiving! 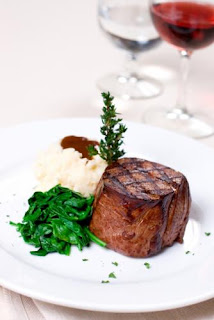 All day Ash Wednesday, I had cravings to eat between meals, have larger than normal small snacks and images of Ruth's Chris in my head. Well, today is our first Lenten Friday. Our Church recovers the communal abstinence that was once common for every Friday of the year. Meatless Fridays, which includes no poultry,pork, other fowl and food products, such as soups made with these meat, poultry and fowl products. No Gumbo, if it has sausage in it, along with oysters, crab and shrimp!

The question I had on Ash Wednesday and will again on Good Friday is the age in which I don't have to observe this canon law on fasting, which is 18 to 59. Does that mean when I turn 59, I don't have to observe it or do I have to wait until I'm 60 which is only 3 to 4 years away? Either way I can't wait! But wait, I'll be 59 or 60 and that much closer to you know what!

And the old question, will a hot dog eaten on Friday during Lent send you to hell?
You better believe it buster! Of course, it has to be eaten with the explicit knowledge that you are eating it to defy our Holy Religion.

Finally, just one blast from the past. When I was a child, my father was in the army and army personnel and their dependents, of which I was one, were dispensed from the Friday law of abstinence. This was in the the 1950's and early 60's. So my mom, being a faithful Catholic, embraced this wonderful gift of a dispensation from the Church and sent me to St. Mary on the Hill School in Augusta, at which I was a second grader, 1960-61, with a hamburger sandwich in my lunch bag. As soon as I took it out of the bag and began eating it, one of my classmates turned me in to Sister Angela who in turn informed the principal, Sister Mary Gerald, both of whom were wonderful, but sadly misguided, Sisters of St. Joseph of Corondelet out of St. Louis. They told me to stop eating that sandwich, as though I would go to hell for it.

I told them I had a dispensation. They didn't like a second grader telling them what he could lawfully do. (I still have this happening to me from higher ups like bishops!) At any rate, after my parents were called, my father set them straight, my biological father, not my Father in heaven, although I'm sure our Heavenly Father noted this injustice toward me to these sisters at their personal judgment. There is justice in the afterlife after all! Fortunately, my second grade teacher was Mrs. Chavous. She was not a Catholic, I believe a Methodist, so she re-cused herself from this whole sordid controversy.

But there was to be more fallout. The newly ordained priest who was assigned to St. Mary on the Hill was consulted by Sister Mary Gerald and she indicated to my father that this assistant pastor, who as I recall had red hair and spoke with a funny accent, even funnier than my mother's Italian accent. I can't remember his name; I think I've repressed it. He was from some weird place I had never heard of, that my classmates called Ireland. Well, this priest told Sister Mary Gerald that even though I could lawfully eat hamburgers on Fridays, that this would be divisive in the school. So my father, being an honorable and obedient man, told my mother to send me to school on Fridays with Spaghetti a la Marinara. Of course she enclosed for me Parmigiano Reggiano, freshly grated, for me to sprinkle on my Friday penance, not to mention a lovely thermos of fine, lush Chianti as is our Italian custom. (Just kidding on the Chianti, my mom wouldn't push the envelope of division.)

But there is more to the story. After this whole scenario of me being turned in by a classmate for eating a hamburger on a Friday from which, as I pointed out to the authorities, I was properly dispensed, Msgr. Daniel Burke, the pastor, came into my second grade class and told all of us children who actually lived in St. Joseph Parish on the south side, (the other side of the tracks) that we could no longer attend the parish school of St. Mary on the Hill Church in the next academic year, because we were not parishioners of the same parish and they were overcrowded with their own people. However,I am convinced to this very day that this was in retaliation for me not only eating a hamburger, properly dispensed on a Friday, but because I was so divisive and had the nerve to tell Church authorities that I was lawful and I was dispensed. I embraced this martyrdom with dignity, but had to spend the rest of my elementary and high school years in a public school, where I found my vocation. God acts in mysterious ways.


But in case you don't think a steak or a hot dog will send you to hell if you die unrepentant while choking to death on these on Fridays of Lent, take note of these medieval images of hell, not a pretty sight! And music in hell is even worse!
Medieval Images of Hell
Posted by Fr. Allan J. McDonald at Friday, February 19, 2010

It seems so little, the fasting in which we are asked to engage. Yet many complain or avoid following even the simplest acts of devotion...like going to Confession,attending Mass,giving to the Church,and praying the Rosary, for Heaven's sake! When I read of the fasts and devotional acts of the Saints and Martyrs, I almost laugh at what is asked of us today. It is almost like the Church is displaying her sense of humor and irony, asking us to fast and otherwise perform so little in light of the sacrifices of the Saints of the Church. God forgive us!

You have a cruel sense of humor Father, LOL!!

I see we are making more progress on the Blog (embedded links now), congratulations.

Personally in our home we follow the abstinence from meat penance on Fridays all year round. My younger children have come home from school on Fridays and said "so and so is Catholic too and she said we don't have to do that anymore". I've explained to them, and shown them, what the Catechism really says and that I decided it just easier to abstain from meat than try to remember to do some other form of penance. I told them, we're taking the easy way out by abstaining. Not sure they still like the idea but when they realized it wasn't a choice of doing or not doing, but rather a choice of what to do, they stopped complaining about abstinence.

My son maintained a Fast throughout Lent last year (1 meal + 2 snacks) and was subjected to relentless pressure from his friends at school to eat. To them it was a "silly religious game". he held his ground, maintained his fast, and guess what, this year 2 of his friends (1 Catholic and 1 Methodist) are joining him in his Lenten Fast. Another of his friends (a Baptist) has attended Latin Mass with us twice and wants to convert to Catholicism when he is 18.

Our devotions to our Faith, linked to a coherent whole of our faith that includes tradition and orthodoxy, are powerful weapons in the war to save souls.

I can understood how you felt then as a child, Father, but it's hard for me to see how as an adult you would not now agree that it would have been "divisive" for a Catholic 2nd grader -- even or perhaps especially if claiming a dispensation no one there has heard of -- to eat a hamburger in the presence of his classmates who could not.

Enjoying your sense of humor :-D

You know, in your Medieval Images of Hell slide show...I swear one of those hideous monsters looked a lot like Al Gore...except the genitalia were too large...

I loved your sense of humor about eating meat on Friday and when I clicked on the link for the images of Hell I laughed out loud. Thank you for this blog today. Now I will go make my salmon patties for dinner.

I talked with a Catholic friend in the neighborhood and the subject of Friday abstinence from meat came up. He said,"We always look forward to it because we go to red Lobster or Bonefish Grill and pig out on lobster and stuffed flounder." He seemed a bit offended when I suggested that this was not exactly the concept of self-denial the Church had in mind with the Friday injunction regarding meat.