I report; I decide! No, actually the Church decides! 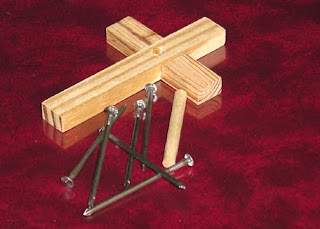 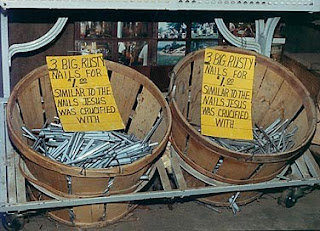 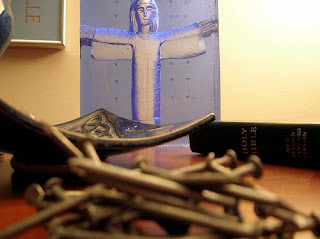 I have XM Satellite Radio in my car. Yesterday I was listening to a talk show on the Catholic Channel. The host asked for call-ins describing their "good experiences" at Mass on the First Sunday of Lent. One caller was gushing about the fact that her priest at Mass gave out nails to everyone. I'm not sure what part of the Mass this occurred, but evidently there was a procession to receive these nails (or were they imposed?) The caller went on to say that "Father" told them to keep the nails throughout Lent as a reminder of their part in "nailing" Jesus to the Cross. By this I think she meant that our personal sins are the reason for Jesus' crucifixion, which He heroically embraced for our salvation.

The priest went on to the tell the congregation that at Good Friday's Liturgy of the Passion and Veneration of the Cross, they would have an opportunity to bring their nail to a rough wooden cross and hammer that nail into the cross. I believe this would be instead of kissing or venerating the Cross as is prescribed for the Good Friday Liturgy.

I almost drove off the road! I don't mind devotions that recall for us what our sins did and do to our Savior. I don't mind these kinds of gimmicks in "para-liturgies" but these do not belong in the official Liturgies of the Church, either Mass or the Good Friday Liturgy of the Passion. I'm doubtful about it even being done during the Stations of the Cross on Good Friday, the Stations being a devotion, not an "official" Liturgy. After all, the Good Friday Liturgy is a part of the three day celebration of the Easter Triduum. It is a part of the victory of Jesus over sin and death. Especially on Good Friday when the Passion According to St. John is proclaimed or sung, the emphasis in St. John's Gospel is that the Holy Cross is the "throne" on which our Savior is lifted up for the salvation of the world. He embraces this "throne" as the Victor in St. John's Gospel, not only as a "Victim."

Woe, is me Father Allan. I am a brother guilty of all that you heard on that radio program and then of adopting those "rites" (ugh) into the Liturgy for Good Friday. Our liturgy committee wanted these adaptations so badly I lost my spine and allowed them to be incorporated int our Triduum. How embarrassed I am even 25 years later. Woe is me.

Years ago I attended a Lenten Mission and one night and the group facilitator had nails in the center of our table. We were asked to pick up the nails and hold them....I really felt awkward and was not sure what effect I was supposed to "feel" WOW what can I say except that I sure am glad I am not part of that Parish's Triduum....makes me want to cry and shudder!!!