POPE JOHN PAUL II APOLOGIZED FOR THESE FORMS OF MASS IN 1980!

Below the pictures is a message from Pope John Paul II in 1980. He tells it like it is and the very nature of what the Mass is. This is very much the hermenutic of continuity that the Second Vatican Council expressed concerning what the Mass is and how we as priests and laity should celebrate it. 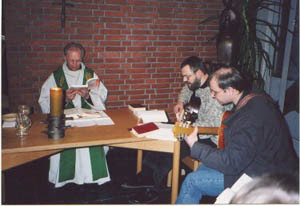 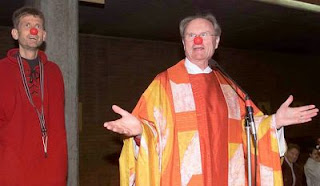 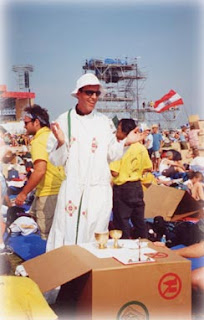 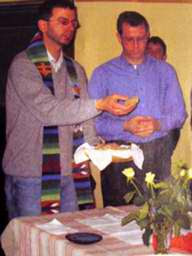 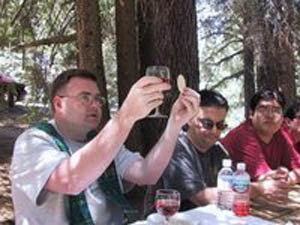 Every priest who offers the holy Sacrifice should recall that during this Sacrifice it is not only he with his community that is praying but the whole Church, which is thus expressing in this sacrament her spiritual unity, among other ways by the use of the approved liturgical text. To call this position "mere insistence on uniformity" would only show ignorance of the objective requirements of authentic unity, and would be a symptom of harmful individualism.

This subordination of the minister, of the celebrant, to the mysterium which has been entrusted to him by the Church for the good of the whole People of God, should also find expression in the observance of the liturgical requirements concerning the celebration of the holy Sacrifice. These refer, for example, to dress, in particular to the vestments worn by the celebrant. Circumstances have of course existed and continue to exist in which the prescriptions do not oblige. We have been greatly moved when reading books written by priests who had been prisoners in extermination camps, with descriptions of Eucharistic Celebrations without the above- mentioned rules, that is to say, without an altar and without vestments. But although in those conditions this was a proof of heroism and deserved profound admiration, nevertheless in normal conditions to ignore the liturgical directives can be interpreted as a lack of respect towards the Eucharist, dictated perhaps by individualism or by an absence of a critical sense concerning current opinions, or by a certain lack of a spirit of faith.

Upon all of us who, through the grace of God, are ministers of the Eucharist, there weighs a particular responsibility for the ideas and attitudes of our brothers and sisters who have been entrusted to our pastoral care. It is our vocation to nurture, above all by personal example, every healthy manifestation of worship towards Christ present and operative in that sacrament of love. May God preserve us from acting otherwise and weakening that worship by "becoming unaccustomed" to various manifestations and forms of eucharistic worship which express a perhaps "traditional" but healthy piety, and which express above all that "sense of the faith" possessed by the whole People of God, as the Second Vatican Council recalled.(70)

As I bring these considerations to an end, I would like to ask forgiveness-in my own name and in the name of all of you, venerable and dear brothers in the episcopate-for everything which, for whatever reason, through whatever human weakness, impatience or negligence, and also through the at times partial, one-sided and erroneous application of the directives of the Second Vatican Council, may have caused scandal and disturbance concerning the interpretation of the doctrine and the veneration due to this great sacrament. And I pray the Lord Jesus that in the future we may avoid in our manner of dealing with this sacred mystery anything which could weaken or disorient in any way the sense of reverence and love that exists in our faithful people.

I think my favorite photo is the clown noses.

The clown noses, alone, are sufficient reason for de-frocking...perhaps even burning at the stake. What a mockery of the Holy Mass.

Together with the use of multi-colored backdrops and some very tasteful and subtle lighting effects, the liturgies would be a credit to the Cirque du Soleil.

One almost expected the Cardinal Archbishop of LA to arrive on a trapeze but that could well be incorporated in a future performance, I suppose.

Fr., Do I need to come to Confession if I watch the aforementioned "nubile young ladies in skin-hugging costumes" dancing?

Deliver us from evil. Amen.

I often wonder where these Priests are today and what would be their response to such photos. They are scandlous to many, many Catholics. For whomever and whatever parish they did this for to "entertain" they did not think for a second how millions of others would see this, nor what the Church asks of Priests and the Ars Celebrandi. Sad to see this and attach it to Catholic or Mass.

Anonymous; If my experience in my own part of the world south of the Equator is any guide, many have now left the priesthood and are either married or shacked up. They wrecked.......excuse me........renovated the churches, monkeyed with the liturgy, inflicted untold heretical homilies on us and then flew the coop leaving us to clean up the mess.

That should come as no surprise. Anyone who celebrates the sacred mysteries in such a frivolous and superficial manner is unlikely to have had a serious grasp of the sacredness of their vocation.