IS THE OLD TRANSLATION OF THE ENGLISH MASS PIG LATIN? MANY THINK SO! 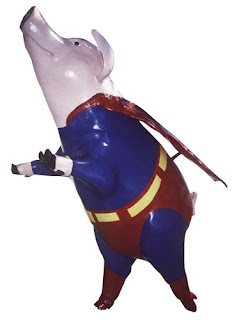 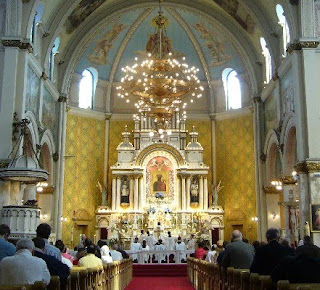 Our new English translation of the Mass to be implemented sometime next year is not like the old English translation (old, not to be confused with "Elizabethan English") that many people actually thought was "Pig Latin!" The following is an abbreviated adaptation of the homily I gave this past Sunday at St. Joseph Church, Macon, Georgia. Enjoy!

The mission of every Catholic parish is tied into the three-fold mission of our pope and our bishops in union with the Holy Father, to teach, to govern and to sanctify God’s people. Priests are ordained by bishops to assist them in their three fold ministry of teaching, governing and sanctifying.

Sometimes we do a better job at teaching than at other times. It is the nature of things, unfortunately. Currently the Church is in a major time of transition as it concerns our implementation of the documents of Vatican II. Pope John Paul II began this process with his election in 1978. In the last five years since his election, Pope Benedict XVI has kicked things up a notch. Many people call this period of Church history we are currently in with Pope Benedict, “The Reform of the Reform.” It has everything to do with making stronger our Catholic identity. If our Catholic identity, faith, morality and spirituality have been in any way weakened in the last 45 years since Vatican II, we are in an era of rediscovering who we are as Catholics, what it means to be Catholic as well as the sacredness of our worship. If awe, wonder and reverence in our worship have been diminished in any way by the immediate reforms of the Mass after Vatican II and the implementation of poorly translated English from the Latin original, the Church is now making a course correction.

But as if concerns teaching, I feel that many of us in the Church have failed to do an adequate job. I want to quote you something, and then ask you two questions?

“The use of the Latin language, with due respect to particular law, is to be preserved in the Latin rites....Care must be taken to ensure that the faithful may also be able to say or sing together in Latin those parts of the Ordinary of the Mass which pertain to them.”

First—have you ever heard a priest at any church you have attended ever quote this to you? Raise you hands. (At all Masses where I asked this question no more than 5 out of every 450 raised there hands having ever heard this).
Second—do you know where this quote comes from? (The same response as the previous question).
It comes from the Second Vatican Council’s document on the Liturgy called, Sacrosanctum Concilium.

Third, have you have heard priests and nuns and other teachers in the Church tell you that the Second Vatican Council did away with Latin in the Mass. Have you ever heard that? (The vast majority raised their hands at all Masses). You were misled, either intentionally or unintentionally! If priests who taught this could be sued for malpractice, what a case lawyers would have!

In about a year, we are going to be implementing the new and more sacred sounding English translation for all of the Mass including the parts that you sing and say. One of the big changes will be going back to the original response to the priestly greeting, “The Lord be with you,” with your response, “And with your Spirit.”

Has anyone ever taught you why “And also with you” is not the same as “And with your Spirit?” I was never taught that—I thought it was just a greeting for Mass. In fact, some priests forgo the formal greeting and just say “Good morning people!” And what do you say? “Good morning Father!” That is a total corruption of the sacred nature of what we do at Mass. We’re not just offering each other pleasantries. This is why we are changing your part back to “And with your Spirit:” But what’s the big difference? Are we splitting hairs?

The earliest English translation of the Mass from 1965 actually used this wording. St. John Chrysostom explains that when the people respond in this way they are affirming the an indelible spiritual change in the soul of a priest that has taken place in the priest by virtue of the Sacrament of Holy Orders, thus enabling him to call down the Spirit upon the elements of bread and wine, transforming them into the body and blood of Christ.—in other words you are greeting the Spirit of Christ present in the priest that empowers him to “teach, govern and sanctify!” You are greeting Christ, represented by the priest, every priest, not just your favorite priest, who in fact presides at every Mass. The priest simply acts as an “alter Christus” or “In Persona Christi” in a sacramental way—but it is Christ who “teaches, governs and sanctifies” through the sacramental nature of the Church and her priests and bishops. So your response has everything to do with faith in the Risen Christ who presides at Mass although now through the sacramental nature of the priest or bishop. This is not just a matter of a more formal language, but also of theology and Catholic doctrine.

I know that learning the Latin parts is making for more work for you and that you now have to think about what you are saying sometimes having to read it, whereas before you didn’t have to really think, you just said it by rote or habit—but maybe that is the problem. We need to reflect and think about what we are doing at Mass and why.

St. Joseph Church in Macon is using this rather unique and unprecedented time in the life of the Church to actually implement the Liturgy document of the Second Vatican Council as highlighted above as it concerns Latin. As soon as it is official for us to do so, we will begin to implement the new English translation. We will return to English, but we will at that time also have a “Latin repertoire” available for special occasions and seasonal celebrations of the Mass. It will also help those who attend the Extraordinary Form of the Mass to see the continuity between it and the Ordinary Form of the Mass.

Excellent post! I would copy and present it to our parish priest but fear that I have over stepped my boundaries already. Wish we had a priest like you in our area but alas... Thank you for the inspiring message.

Your final question reminded me of the story about a parish where the DRE, a past or present religious sister without the appearance of one, entered the church one afternoon and discovered the children's choir rehearsing the Kyrie (in Greek).

She angrily told the choir director this was pointless, since the children undoubtedly had no idea what it meant. To prove her point, this DRE pointed to a little boy on the first row and asked, "Son, can you tell me what Kyrie eleison means?"

He replied. "Yes, Sister, it means Miserere, Domine." She turned and stormed out without further comment.

Fantastic, a model for every parish and Priest. Good news for the people and it will be worth it. How good it is to see you Father implement the SC and also support the Holy Father and Magesterium. Things like this make a person proud to be a Catholic.