THE WAY TO TRUE REUNION WITH THE CHURCH OF CHRIST, THE CATHOLIC CHURCH

The Anglican Use Catholic Mass at the Basilica of the Sacred Heart in Newark, New Jersey (they like ad orientem and don't freak out at kneeling for Holy Communion, Holy Communion from the Chalice and married clergy. PRESS HERE FOR MORE INFO 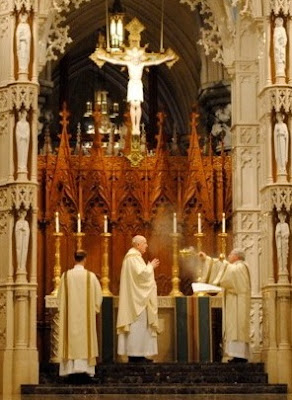 The "spirit of Vatican II" ecumenical theologians despise that Pope Benedict establishED the Anglican Ordinariate to bring into the Full Communion of the Catholic Church disaffected Anglicans and Episcopalians. If you know anything of the direction of the Episcopal Church in terms of doctrine and morals, you will understand quite well why so many Anglican and Episcopalians are disaffected. Just read my post on birth control.

But the spirit of Vatican II form of ecumenism was to water down as much of traditional Catholic identity, liturgy, architecture and piety as possible to help Protestants feel at home with the Catholic Church.

But these theologians didn't really want a substantive reunion with the Catholic Church, they wanted all the denominations of Protestantism to feel at home in the Catholic Church and Catholics feel at home in their denominations and pretend that there was unity through Baptism alone as though Baptism in and of itself is some sort of ecumenical panacea. They wanted inter-communion at all times even when there was no organic communion between these denominations ant the true Church.

Pope Benedict has confounded this spirit of Vatican II form of ecumenism by showing that true unity between the Catholic Church and Protestant denominations is by them accepting the fullness of the Catholic Church but also recognizing how the Holy Spirit has preserved elements of "Catholicity" in their spiritual and liturgical heritage. This is something indeed that Vatican II opened the door.

What is also very interesting is that former Episcopal priests who are married are being ordained Catholic priests and former married Episcopal bishops are being ordained priests. They cannot be ordained bishops due to their marriages, but these former Episcopal bishops are going to be allowed to be "Ordinaries" in these Anglican Ordinariates which means that they will have all the administrative authority of a bishop, be able to wear the insignia of the bishop including the miter and staff!

Cardinal Donald Wuerl, Archbishop of Washington
Cardinal Wuerl was the Vatican’s representative for the implementation of Anglicanorum coetibus in the United States

It is with great joy that I welcome the establishment of the Ordinariate of the Chair of Saint Peter, and the announcement that Reverend Jeffrey N. Steenson, DPhil, has been appointed its first Ordinary.

Today’s events are the fulfillment of the hopes of many Anglicans in the United States who have longed and prayed for reconciliation with the Catholic Church while retaining cherished elements of the Anglican patrimony.

The establishment of the Ordinariate of the Chair of Saint Peter is the culmination of careful preparation and much consultation with Vatican officials and the United States Conference of Catholic Bishops. I am especially grateful for the generous assistance and fraternal welcome that many local bishops have extended to those Anglican clergy and groups seeking to join the Ordinariate.

As the former Episcopal Bishop of the Rio Grande, Father Steenson brings to the position of Ordinary great pastoral and administrative experience, along with his gifts as a theologian. Under his leadership, and through the intercession of Our Lady of Walsingham, the Ordinariate of the Chair of Saint Peter will both flourish and be a rich blessing to the Catholic Church in the United States.

Cardinal Daniel DiNardo, Archbishop of Galveston-Houston
Cardinal DiNardo has been very supportive of the ordinariate, which will be based at Our Lady of Walsingham parish in Houston.

I welcome the establishment of the ordinariate and the appointment of Father Steenson, whom I have known since 2009.

He is a wise and prudent administrator who will bring a vibrant intellect and humility to his role as head of the ordinariate. He has a very deep sense of the meaning of Church. Father Steenson is not only an outstanding patristic scholar, but a priest with a strong pastoral sense and an abiding respect for all people. He will surely be an effective, kind and joyful leader who will love and guide God’s people with the attitude of Christ.

I am not as optimistic about this Anglican/Episcopalian business as some. I believe it is only a matter of time before they begin asking for small accomodations, then larger, then more, etc. Plus, they bring with them a pretty universalist/Gnostic theological bent which does not need to get any further foothold in the Catholic Church.
It is sort of like when Yankees move South to get away from all that urban crime and squalor theat they created. They come down here and bring their Yankee values with them, thus giving us what they like to call "the New South..." Right. So, I believe the jury is still out on all this ecumenical hand holding...I see trouble.

I am very happy about the establishment of the Anglican Ordinaries.

The Anglicans who are becoming Catholic are leaving the Anglican Union for the same reasons that we Catholics don't like to see liturgical abuses in the Church. I witnessed a beautiful and reverent liturgy at Ely Cathedral. Just add the Catholic prayers and Ordination with Papal authority and it would have been very Catholic.

To all of our formerly Anglican brothers and sisters, I say "Welcome Home!"

As a former Anglican who's very familiar with this phenomenon, I can safely say that you need not worry. Anglicanism was--and I'm sure you know a lot of this story already--an agreement to disagree at the outset, unity of form at the expense of unified doctrine, a way to try to satisfy both Elizabethan Catholics and Elizabethan Protestants. Thus there have always been different stripes of Anglican--the more conventional, the more traditional, the more Catholic (with sub-varieties of both liturgy and doctrine), the more Calvinist, the more nonconformist, and, in recent decades, the groovy (the latter being remarkably similar to the left-wing Catholic dissenters).

The stresses of the sexual revolution have turned out to be the straw that broke the camel's back. First the ordination of female "priests"; second, the ordination of female "bishops"; and finally the ordination of an openly gay and practicing male "bishop." This trend has fostered the exodus to Rome not of Anglicans in general, but rather of a particular kind of Anglican: one who was more orthodox to begin with, and who was more liturgically High Church to begin with. If you think about it, the type of Anglican you fear has no reason to become Catholic because his Anglican church already possesses all the things that Modernists in the Catholic Church are agitating for.

In my experience--and again, it is a pretty long and extensive one--every single Anglican I know who has become Catholic is, both liturgically and doctrinally, _extremely_ orthodox. This includes, by the way, at least two Episcopal clergymen who are now Catholic priests.

Keep in mind, further, that the liturgies in the Book of Common Prayer are pretty much the Sarum Rite of the Catholic Church, with some Cranmeresque theology thrown in. All you need to do is to remove the Cranmer, and you have a Mass that is actually older than the Tridentine, and a lot more beautiful and (typically) reverent than the NO. For the result, google "The Book of Divine Worship." (I have a copy if you'd like to see one.)

So trust me, on this score you have nothing to fear. In fact, it's the basis of what many Anglicans-turned-Catholics say in not very joking way: We'll give the Anglicans our modernists if they'll give us their orthodox Christians. The movement that Fr. McD writes about is half of that equation.

Anon, thanks for the encouraging clarification. Yes, the Whiskeypalians can have all our modernists if they will give us their orthodox...LOL!

my small iphone publish, delete button caused me to delete Henry's comment, so I copy it here:

Henry Edwards has left a new comment on your post "THE WAY TO TRUE REUNION WITH THE CHURCH OF CHRIST,...":

The high church AngloCatholics who are returning are far from ordinary low church believe-nothing Episcopalians, who in fact are too close for comfort to the typical suburban Cathoic parish desperately needing reform.

I'm reminded of what the great Fr. George Rutler said when asked what he'd missed most since he left the high Anglican Church to become a rock-solid Catholic priest. "The Mass in English", he replied.

Pin, let me second what others are saying about the C of E people who have converted. They are very orthodox in many ways, Fr Rutler came to mind as I read this post.

I do agree that there is a chance we will see an exchange, of sorts, of Catholics who have become more Protestant than and vice versa. The couple who taught the New Translation courses for our parish come to mind. The husband is exactly the sort of person Frajm described who had become comfortable with the post V-II Church and has told me that is why he 'converted'. For example, he includes the doxology "For Thine is the Kingdom, the Power, and the Glory..." with the Lord's Prayer as a tip toward his Protestantism. This annoys me for that reason, only, understanding its use as an acclamation.

New Year's Day, due very poorly planned personal schedules, we attended Mass at a local parish that treated us to a homily based on Youtube and music provided by a rock band. You, Pin, actually came to mind as I struggled with the decision to march out in protest. My wife and daughter were actually enjoying my pain. But the Eucharist was present, and I was also reminded of the Gulag, and how pathetic their services must have been. So I figure I can't let a long haired priest and snare drum stand between my family and Our Lord. It is almost certainly a sin for me to wish these people would leave the Church, so I have to wish that they would at least get with the program or make a commitment of some kind.

I think the Anglicans, et al, will make that commitment as they have at least three choices: stay where they are, become Catholic, or something else altogether. I think the choice is far more difficult for the Catholic who is feeling the spirit of Vatican II slip away.

RCG, "...a sin to pray for these people to leave the Church." As far as I am concerned, they already have. And, yes, I would have left the service.

I'm with Pin, I would have headed for the door.

We are obliged to attend Mass.

The Church is obliged to give us a real Mass to attend.