SHOULD POPES HAVE A RETIREMENT AGE OR SHOULD THEY REMAIN IN OFFICE UNTIL DEATH? 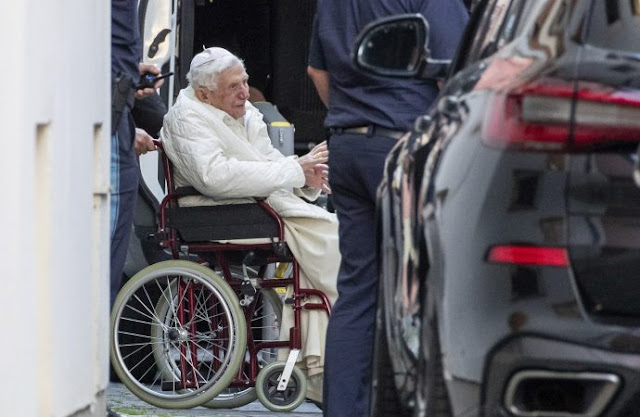 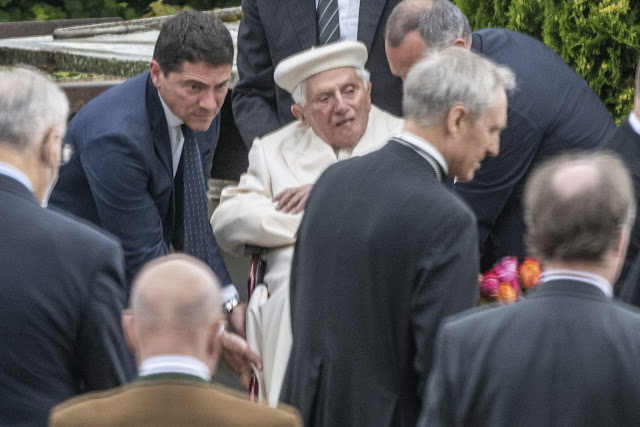 There is a danger in having retired popes. They can still use or be used by their former status as the reigning pope.

We have seen this tension in Pope Benedict's retirement. Perhaps he doesn't like the direction of the Church under his successor and has made veiled points about it in his writings and meetings with various people.

Or others use him for their theological and ideological purposes. Pope Benedict's recent visit to his homeland to go down memory lane with his dying brother (let's face both are dying) was used as a diatribe against the reigning Pope Francis, all fantasy of course, or is it?

What if Pope Benedict leaves a testimony after he dies that calls into question the papacy of the reigning Pope Francis.

Thus having retired popes can created division and schism in the Church.

We have been living through the "Benedict Option" or should I write "experiement." It is an experiment in the retirement of popes. What has it told us and should this experiment be institutionalize do or abolished?

If popes remain for life, we will be dealing with an incapacitated pope, similar to Pope St. John Paul's last years and months.

If a pope has a debilating stroke but a healthy body, he could live for years in a totally vegetative state. The same with demential or Alzheimer's disease or other diseases of that type.

Is there a way to have a "Vice Pope" that is simply a caretaker who makes sure that the Curia does it job without overstepping their purpose?

Should popes have a retirement age or should they remain for life no matter what?

And what can be done with a pope who goes crazy but is not incapacitated. Should there be canon laws to deal with a rogue pope who might be a heretic?

Or should we just trust the Holy Spirit who eventually uprights the ship that lists?
Posted by Fr. Allan J. McDonald at Monday, June 22, 2020

"Til death do us part"

Father McDonald said..."What if Pope Benedict leaves a testimony after he dies that calls into question the papacy of the reigning Pope Francis."

Should that prove true, then Pope Emeritus Benedict XVI has — and I don't believe the following — has lied repeatedly from 2013 A.D. to date.

1. In 2013 A.D., Pope Benedict XVI — and from that time to date, Pope Emeritus Benedict XVI, —insisted repeatedly that he resigned the Papacy freely.

2. He has insisted that Pope Francis is Pope.

3. He has pledge his loyalty to Pope Francis.

It's a reason every pope should CAREFULLY not only select the cardinals and prelates in charge of the various dicasteries, but should be extremely careful in who he allows to be consecrated a bishop. John Paul II was far less of a disaster than Paul VI, though had some very unfortunate choices for the episcopate and even worse choices for the cardinal's hat all of whom have undone the work of his pontificate and opposed his theology. Carlo Maria Martini, Walter Kasper, Reinhard Marx... Jorge Bergoglio...

If true, this whistle blower bombshell could rock the Catholic Church:

Exiled Chinese dissident Guo Wengui alleged this weekend the Chinese Communist Party (CCP) “allocates $2 billion a year” to pay off the Vatican for its silence concerning Chinese atrocities...“In order to do this, he is ready to make a few concessions: say nothing about Hong Kong, do not get too excited when the Chinese leader talks about rewriting the Bible,” he added, in reference to announcements that the CCP intends to retranslate the Bible and other sacred texts to make them conform to socialist ideology.

Because of this overarching desire, Mikozy said, the pope is willing to turn a blind eye to the CCP’s violations of religious liberty and other human rights issues.

According to Mikozy, the pope’s silence on Hong Kong suggests that he will go to great lengths not to offend the CCP.

If this report is true, and evidence is found that Pope Francis has been accepting bribes from the Chinese Communist Government, would this be grounds to remove him from the papacy?

If a diocesan bishop has to resign at 75 how much more so should a pope retire; a man who leads the universal Roman Church? Desire for power, not the good of the Church have made the Office of Peter a lifetime ministry. The Lord said nothing of this when He made Peter the primate of the Apostles.

Yes, there will those who don't like a pope and come up with conspiracy theories to try to make a retired pope, pope again. So this might be another cross the Church has to endure. She is used to the crosses. The pope emeritus would also have to go along with this craziness.

When the Church of Rome began to teach "No one may judge the first See" that is when the problems began. An all powerful demigod who is judged by no one is not what the Lord intended. we know Paul rebuked Peter to his face.

There can be no "vice pope." There must be a mechanism in place to deal with impeded popes, senile popes and other incapacitated popes.