PRO LOBSTER OR IS IT ANTI-LOBSTER--JUST WHAT IS THE EPISCOPAL CHURCH'S MORAL POSITION?

This giant lobster near my father's childhood home in Judique, Cape Breton--it only makes sense for the Episcopal Church, as liberal as it is, to stop the senseless killing of lobsters! Have they ever seen the movie, "The Birds?" 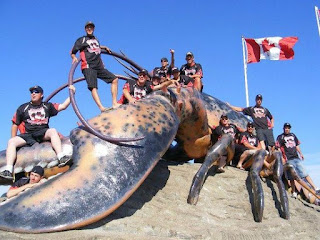 At churches from Maine to Maryland to Mississippi, the annual community supper means one thing: Lobsters.
To animal rights activists, that’s a problem.

People for the Ethical Treatment of Animals, the prominent advocacy group, has honed its focus on one beloved tradition in Episcopal churches across the country: the lobster boil. The animal-rights group sent a letter recently to Bishop Michael Curry, the presiding bishop and primate who leads the nationwide church, asking him to end the practice of lobster dinners in favor of something more vegetarian.

“Most of us grew up believing that killing lobsters and other animals for food is what must be done, but if we contemplate it, all killing requires conquering, violence, and separating ourselves from the rest of creation,” PETA wrote to the bishop. “God designed humans to be caretakers, not killers.”

The letter cited both the Old and New Testaments and the writer David Foster Wallace, who examined the practice of boiling lobsters alive for consumption in his well-known essay “Consider the Lobster.” PETA described the practice as “cruelty that I know doesn’t reflect the tenets of the Episcopal Church.”

Ben Williamson, a spokesman for PETA, said he didn’t know if there was any particular link between Episcopalians and lobsters, and several Episcopal church leaders whom The Washington Post asked about the connection didn’t have an answer either. But PETA staff noticed a pattern of lobster dinners as church fundraisers, and decided to look into it. They identified 28 Episcopal congregations advertising lobster fund-raisers in more than 10 different states.

The PETA staffers looked into how many lobsters each church cooks at a fundraiser and got answers ranging from 75 to 2,000. In total, PETA said Episcopal churches kill well over 10,000 lobsters a year, a total that could not be verified by The Post.

It’s evident, however, that the number is high – St. Timothy’s Episcopal Church in Greenville, North Carolina, for instance, boasts on its website that its annual fund-raiser has sold more than 65,000 lobsters since 1978. “Put in perspective, we’ve sold around 40 tons of lobsters, or the equivalent of a couple of school buses,” the website says, with accompanying jovial clip art of buses. (Lobsters at St. Timothy’s cost $16 each, and children can also enjoy a bouncy house and a hay ride.)

A spokeswoman for the Episcopal Church said that Curry is on vacation and did not respond to further questions. Many of the churches on PE-TA’s list did not respond to a reporter’s inquiry.
Posted by Fr. Allan J. McDonald at Saturday, September 02, 2017