FOR THOSE WHO LOVE TRADITIONAL VESTMENTS!

I wonder how my new parishioners in Richmond Hill would feel about purchasing this chasuble for me and my first Mass with them the weekend of June 25/26? Tradition on steroids? 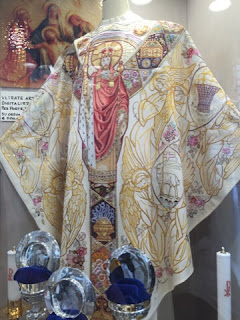 Surely you jest. Unless you mean the "tradition" of the drugged-out 60s and 70s, when whatever seemed in a psychedelic daze like it might feel good was ok to try, at least once.

Maybe tradition on acid. Of course it would be a great way to introduce litugical reform to your new parish. "Wow! Father that is an amazing chasuble! Turn around so we can see the back."

Suggestion from an old guy...who has been around the block more times than most of you....for the first year of your new assignment...don't change anything....don't buy anything...(I'm guessing you'll ignore this tip...)

It's said that every bishop tells every new pastor he appointments, “Don’t change anything until you’ve been there a year.” Another common piece of advice (from others) is “What you don’t do during your first year as pastor, you’ll never do.”

In his book Letters to a Young Catholic, George Wiegel tells what happened within a day or two after Fr. Jay Scott Newman arrived in Greenville, SC as the new pastor of St. Mary’s Church:

"When the people of St. Mary's came to church on Sunday morning, July 1, 2001, they noticed that things had changed in the previous twenty-four hours. The tabernacle, which had been banished to the side of the sanctuary in 1984, had been restored to its proper place at the end of the long axis of the church, enthroned on the reredos at the rear of the sanctuary. A large icon of Mary had been hung — the first image of the parish patroness to be visible in the church twenty years. Burlap banners made by second graders had been removed. The tattered paperback 'worship resources' (which is what some confused people call 'hymnals') had been removed from the pews and consigned to the parish dumpster; a music program for that Sunday's Mass had been made for every congregant. But these changes were merely a harbinger what was coming next."

Two years later: "One June 22, 2003, Corpus Christi Sunday, the parishioners of St. Mary's packed the church for a Solemn Mass. In a little less than two years, the church had been transformed. . . . . A glorious new golden tabernacle had been installed . . . But if you'd been there that day, what would have struck you most powerfully would have been how the congregation itself had been transformed. More than six hundred people lustily sang three classic hymns: 'At the Lamb's High Feast We Sing,' 'Alleluia! Sing to Jesus,' and the Latin motet Adoro Te Devote; the choir sang Cesar Franck's Panis Angelicus and William Byrd's Ave Verum Corpus; both congregation and choir were accompanied by organ, trumpet, tympani, violin, and viola. The congregation had learned to chant its proper parts of the Mass — the Kyrie, the Gloria, the Sanctus, the Lord's Prayer, and the Agnus Dei. . . . . . Everyone's attention was riveted as Father Newman sang most of the Eucharistic Prayer in a simple chant that underscored the solemnity of this central action of the Mass.”

Of course, St. Mary’s Greenville—where Fr. Newman is famously not interested in the EF Mass, but every OF Mass is celebrated ad orientem—is now widely known as a model for “the liturgy restored and renewed as Vatican II intended" (in Wiegel’s words). So perhaps the message is “If you’re ever going to get it done, don’t let the grass grow under your feet.”

Unless the guy you're replacing got kicked out or went to jail or something....then you should probably change some things...

All good advice. Just have confidence in what you are doing and give consideration that changes may seem to be comments on adequacy of your predicessor as well as on the sensibilities of the laity of the parish. The folks to be most wary of and least yielding to are the parish staff. They should support and follow you offering advice and help to get your vision executed. Anything else and they should be at least reduced in stature or removed altogether. The method of that removal is best done in an Italian way.

When you get to the new parish you might consider doing something with that big brown wall that sits in the sanctuary. It's awful, it needs some carvings or gold leaf or something.

Father, you are not serious about that vestment? As regards any changes I'm with Henry on this I think they need to be made rather quickly before the laity in charge of the parish turn up on your doorstep and say as happened to one priest I know, "We heard rumors that you are going to replace the risen Christ in the sanctuary with the crucifix that is now in the foyer". Don't do it because that was a gift of so and so and we'll be here long after you're gone. No changes were made and we understand now that nobody actually knows who put the risen Christ in the sanctuary. There is still no crucifix in the sanctuary - it remains in the foyer. And example of one parish where some of the parishioners who have been going there for years feel they own the church and their views should be adhered to above the rubrics which state that there must be a crucifix in the sanctuary.

Jan...Maybe you could join anonymous....

This is gob. A miserable old man who is loud and rude and gets his way because people can't be bothered dealing with him.

I'm so relieved you (finally) got the header image to fill the space. My sense of symmetry was habitually offended. That said—Dear Father, I won't offer you any advice, just prayers for you and your new parish. As for the chasuble (purchase)... only if you get a matching maniple and stole (and glide around the sanctuary on your hoverboard). :-)

The trouble with appealing to the experience of one's age is that so many of today's older generation rejected the wisdom of their own elders back in the Sixties and Seventies. That's why in matters of faith, the rest of us we must skip a generation in order to discover the accumulated wisdom of the ages. But thank you for lava lamps; I like those.

Or just use the funds to erect an altar rail around the sanctuary of your new parish ;)

Not liking it, go for a nice Traditional Roman vestment I know you prefer Gothic but how about a nice gold and silver Roman one for your first Mass? Also are you going to slowly add LATIN to your Mass over time there? And how will you introduce the TLM to your new people??? Just do it Father and they will come!!!!!!!!!!

The chasuble is actually a replica of one made in Belgium in the early 1940s. So it's traditional at least in the sense of being well before Vatican II.

The new church looks austere compared with St Joseph's, but this is because it is new. The internal decoration of churches is a gradual process that usually takes decades. Items like altar rails and stained glass windows are usually added as a result of pious donations and bequests.

The see-through altar needs a frontal (antependium) in the liturgical colour, plus the 'Benedictine' arrangement of candles and crucifix. Adding things is not the same as taking things away or changing them.

Further to Deacon Fritz's post, the vestments designed by Henri Matisse for his chapel at Vence (1948-1951) are a striking example of 20th century art, as is the chapel itself. Copies were sent to the Vatican at the Pope's request.